The first USA Today Coaches' Poll was released today, ranking the Hokies No. 20 nationally. Tech finished the 2011 season ranked No. 17 overall in the poll and 11-3 after a loss (ahem) to Michigan in the Sugar Bowl. The Hokies received 461 points from voters in the poll.

LSU was ranked atop the poll despite not returning a starting quarterback, not receiving as many first place votes (18) as Alabama (20) and USC (19), and being beaten by Alabama in the National Championship (or whatever you want to call that farce of a game, though I recommend SEC regular season game part 2 being masqueraded as a championship). Oklahoma (1) and Oregon rounded out the Top-5.

Georgia, Florida State (1), Michigan, South Carolina and Arkansas completed the Top-10. Florida State was the lowest-ranked team to receive a first place vote. Why do coaches keep ranking the Seminoles in the Top-10 ever year when they have failed to meet that mark since 2003!?

West Virginia, Wisconsin, Michigan State, Clemson and Texas make the Top-15. Ordinarily I wouldn't complain, but Texas just finished an 8-5 season, and is the highest team ranked who did not have 10 9 wins a year ago. Also, the Longhorns were the highest-ranked team to finish not ranked last year (not counting USC, who was not allowed to be ranked per the NCAA sanctions imposed on them. They would've been if they could. Texas just wasn't). Shows what a name will do for you.

Looking at this poll, Hokie fans will probably think No. 20 is a little bit low considering that the Hokies 1. Finished with a higher ranking in 2011, 2. Return a record-setting quarterback, 3. Return 9 starters from the No. 10 defense nationally and most of their reserves, including four starters who spent much of last year out with injuries, and 4. Are the only program in the nation with eight consecutive 10-win seasons. I would tend to agree with that and feel that the Hokies should probably ranked somewhere around No. 15. But, voters probably put more emphasis on the Hokies facing their hardest schedule in years and fresh faces across the offensive line.

Only three ACC schools were represented in the poll, although Georgia Tech, N.C. State and Virginia all received votes. The Hokies 461 points were 63 points higher than No. 21 Kansas State, and 395 points higher than No. 25 Auburn. You can tell the Hokies got a lot of votes in the 16-20 range as they trailed No. 16 Nebraska by only 40 points. Tech was nearly 1,000 points behind poll-leader LSU. 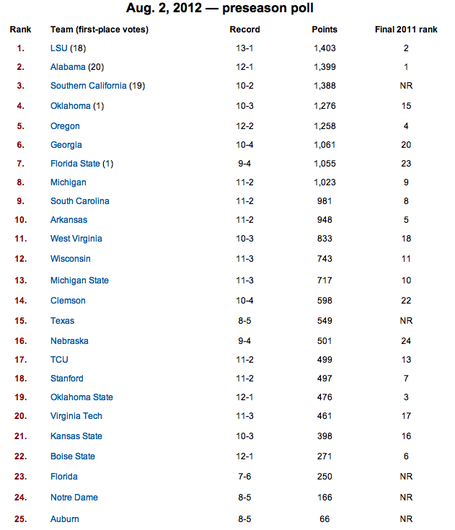