Week two in college football was interesting, to say the least.

There was good, there was bad and there was very unfortunate. The good? Teams ahead of Tech (Wisconsin and Arkansas) lost. The bad? Pittsburgh's offensive line and Miami's overall play. The very unfortunate? Tulane safety Devon Walker. Thoughts and prayers to him, his family and his teammates on his road to recovery. An injury like that really puts things in perspective.

Let's take a quick look back at some of Week 2 action:

So what's in store for week three? Follow the jump to find out.

Ten Games to Watch This Weekend

(in order of play. All times ET, all games subject to local network blackouts)

Rutgers at South Florida, 7:30 PM ESPN
Rutgers (2-0) heads on the road to play South Florida (2-0). Rutgers beat Tulane in week one and what looks like the Buffalo Bills Howard in week two. South Florida rallied on the road in Nevada in week two with a 32-31 victory and beat Chattanooga in week one. South Florida is one of the favorites in the Big East and the game against Rutgers will give us a look into how they will do against the Big East this year. Keep in mind that each team has had short rest so this might be either a.) whichever team is in better shape will win or b.) whichever team plays the least sloppy will win.

Washington State at UNLV, 9:00 PM ESPN
Washington State (1-1) lost big to BYU in Mike Leach's piratical debut for WSU. State followed that loss with a tight 24-20 win over Eastern Washington in week two. UNLV (0-2) has lost each of their games by three points: first to Minnesota, second to Northern Arizona. This games on here because a.) you need a Friday game to watch, right? and b.) it could be entertaining with how poorly these two teams have played.

California at No. 12 Ohio State, 12:00 PM ABC
Ohio State (2-0) hosts Cal (1-1) at noon. This game is on the list because of OSU quarterback Braxton Miller. Miller, a sophomore, has been unstoppable so far for Ohio State; throwing for 362 yards and three touchdowns, while rushing for 302 yards and four touchdowns over the first two games. Cal's defense isn't the best, allowing 30+ points a game so Miller may be able to put on a show yet again, but this time against a team from a BCS AQ conference.

No. 1 Alabama at Arkansas, 3:30 PM CBS
Alabama (2-0, 0-0) gets their first SEC test and it comes on the road against Arkansas (1-1, 0-0). Arkansas dropped a game to Louisiana-Monroe and, as a result, dropped from No. 8 in the nation to out of the AP Top 25. Should note that Arkansas was without QB Tyler Wilson for the second half after he sustained a head injury. Alabama thumped then No. 8 Michigan in the first game of the year and then took care of business at home against Western Kentucky. Arkansas has a tough task at hand if they want to get back on track and Alabama can continue to impress with a win over a SEC foe.

No. 18 Florida at No. 23 Tennessee, 6:00 PM ESPN
Florida (2-0, 1-0) dispatched SEC newcomers Texas A&M last week to open their SEC play, but have another SEC road test on the slate for this weekend against Tennessee (2-0, 0-0). Florida has won 7 straight games against Tennessee and 8 of the last 10. This is a big SEC-East game and Florida can jump out to a 2-0 lead on the rest of the division, or Tennessee can make things interesting with a win.

Arizona State at Missouri, 7:00 PM ESPN2
Arizona State (2-0) heads on the road after a double digit win over Illinois while Missouri (1-1) tries to bounce back from a loss to No. 7 Georgia in their first SEC game. Missouri had a 10-9 lead over Georgia at the half, but was outscored 32-10 in the second half. Arizona State will face a much tougher opponent than in they did in either of their first two games so it'll be interesting to watch how they do against a stronger opponent.

No. 2 USC at No. 21 Stanford, 7:30 PM FOX
A big PAC-12 game on the slate as the Trojans (2-0, 0-0) head to Stanford (2-0, 0-0). The Trojans were in a tight game against the Syracuse Orange, leading just 21-16 after the third quarter. Side note: Trojans played the Orange last week and the Cardinal this week, wonder if there's ever been back-to-back games against teams who have just a color as their mascot. Stanford escaped San Jose State in week one with a 20-17 win, but followed that with a 50-13 whooping of Duke. USC should be the favorite in this one, a Stanford win would shake up a lot of things in the NCAA world.

No. 20 Notre Dame at No. 10 Michigan State, 8:00 PM ABC
This is always a big game in the midwest. Notre Dame (2-0), who might as well be in the Big 10, plays Michigan State (2-0) in a big showdown for these two teams early on. Michigan State started the season with a big win over Boise State and then beat Eastern Michigan in week two. Notre Dame beat up on Navy in week one, but narrowly beat Purdue 20-17 in week two. Maybe they had too much fun in Ireland? This should be a good game to watch and a lot is on the line for Michigan State in this one in terms of National Championship dreams.

No. 14 Texas at Ole Miss, 9:15 PM ESPN
The Longhorns (2-0) head to Oxford to play the Rebels (2-0). Texas knocked off Wyoming in week one and shut out New Mexico 45-0 in week two. Texas QB David Ash leads the Longhorns with 377 yards and 3 TDs and Jaxon Shipley leads in receiving with 75 yards and a touchdown on 9 receptions. Shipley is the younger brother of former Texas standout Jordan Shipley and Colt McCoy's younger brother Case McCoy is the back-up. I still like our combo of Fullers. Ole Miss dispatched Central Arkansas in week uno and UTEP in week dos. The key to this game will be the ability for Ole Miss to run the ball.

Wake Forest at No. 5 Florida State, 12:00 PM ESPN
Wake (2-0, 1-0) opened with a three point win over Liberty and then pulled out an ACC victory over UNC with a winning touchdown with 2:09 remaining in the fourth quarter. Florida State (2-0, 0-0) gets a crack at ACC play after last week's game against Savannah State was ended early due to weather. This is a big game in the Atlantic and though it's not likely WF will be good enough to win the division, they could certainly help out Clemson in the process. Let's be real though, FSU will probably run over them.

Connecticut at Maryland, 12:30 PM ESPN3
UConn comes in after losing to NCState by three points in what I'm sure was a boring, boring game. Maryland started their season with a 7-6 win over William and Mary. Yes. The Terps followed that up with a 9 point (oooh!) victory over Temple. UConn should win this one, but I'll be pulling for the ACC.

Bethune-Cookman at Miami, 12:00 PM ESPN3
Why this game? Miami looked bad against both Boston College and KSU and this is a chance to find out just how bad Al Golden's team is. Will they lose? Probably not. But it's a chance to see how they bounce back from getting destroyed by Kansas State last week.

**Virginia at Georgia Tech, 3:30 PM ESPNU
This is a big, big game in the ACC Coastal. Virginia (2-0,0-0) is yet to play an ACC game, but eked out a home victory over Penn State (missed field goals, anyone?) and rolled over Richmond in week one. Georgia Tech (1-1, 0-1) opened with a loss to Virginia Tech, hee-hee!, and got back on track by trouncing Presbyterian 59-3. The key match-up in this game will be UVA's defense vs. Georgia Tech offense. UVA's offense is playing poorly at this point so they will need the defense to keep them in this one. As for who to cheer for? Too early to tell with the insanity that usually occurs in the Coastal.

North Carolina at No. 19 Louisville, 3:30 PM ABC/ESPN2
UNC (1-1) comes in after a close loss to Wake Forest to take on a much tougher opponent. UNC has an opportunity to prove that the Wake loss was more of a fluke than a true indicator of talent.

Which games are you most excited about for this weekend?

NEW for this week, a visual viewing guide. I don't know if this will be a weekly thing because it can get a little time consuming but here's a visual guide for the weekend, omitting Thursday and Friday. 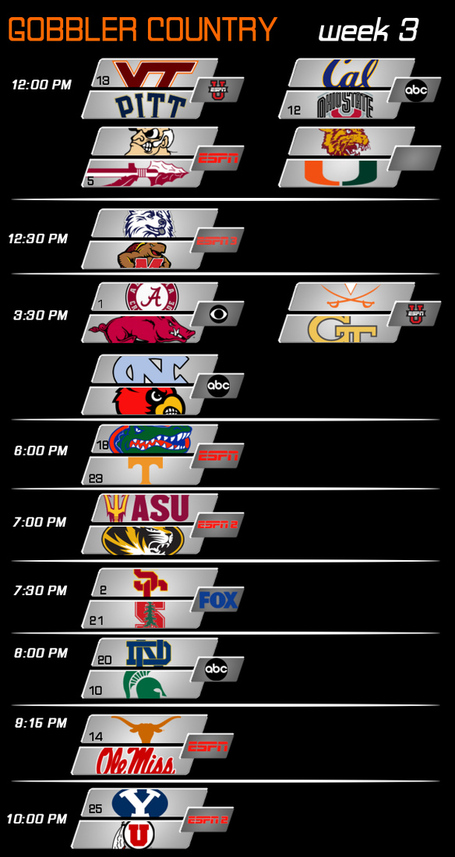