Share All sharing options for: D.J. Coles to Miss Remainder of Season

Via Andy Bitter of The Roanoke Times:

And Virginia Tech makes it official. WR D.J. Coles out for the season. Likely to get medical hardship waiver for another year. #Hokies

DJ Coles left Monday night's game towards the end of the first quarter with a banged up right knee. Coles had surgery in the offseason to repair a torn posterior cruciate ligament in the same knee. It's not yet clear whether the injury is to the same ligament--or any ligament for that matter.

Follow the jump for more on the bad news for the Hokies.

Coles was finally starting to get some prime playing time after the departures of Jarrett Boykin and Danny Coale, but this sets things back a bit.

To me, the injury raises some questions:

There's no way of telling whether or not Coles was rushed back too early. A full recovery from an injury/surgery like that could easily be hampered by the physical demands of major college football. Coles size and physicality, he would have been a big threat against Georgia Tech and maybe that was stressed leading up to the game. Unfortunately, we didn't get to really see the full game plan for him Monday and now won't see him playing the rest of the year. Don't get me wrong, I'm not blaming the team coaches or doctors for this at all. Coles just happened to get hit on the same knee that had been repaired, nothing that could have been prepared for.
Coles is a big asset in the blocking department. Remember this gem from last year?

Coles is going to be sorely missed in the blocking game on the outside. Davis is the closest to size of Coles (in fact, Davis has a few pounds on him) but Coles seems to have more physicality in his game.

On the depth chart at split end the Hokies have Dyrell Roberts and Corey Fuller, both of whom should see substantially more playing time with Coles injured. Another player that may see more playing time as a direct result, and Monday's touchdown may have been proof, is Demetri Knowles.

The Hokies should be able to fill the void offensively with the depth and it will be interesting to see what changes, if any, are made in the passing game. The Hokies may go a bit more towards speed and quickness instead of size and power.

Weigh in with your thoughts below.

UPDATE: I went back to see if I could find when Coles got hurt. Coles went out with 1:18 left to play in the first quarter after a knee-to-knee hit from Georgia Tech's Rod Sweeting. The kicker? Coles was lost for the season on a play that was called back due to an illegal procedure.

Below is a screen grab of the hit. Nothing dirty on the hit, just an unfortunate outcome. 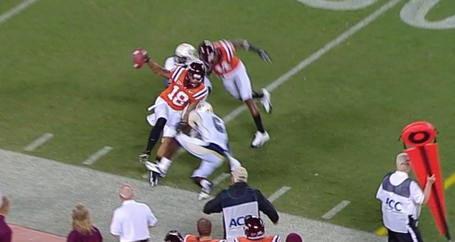