You know what's awesome? Lists. Here are some things that I ranked during Virginia Tech's game against Pittsburgh.

Share All sharing options for: Ranking Stuff: The Pittsburgh Game

Welcome to "Ranking Stuff," where I'm going to throw together a bunch of lists because lists are awesome. You never know what you'll find, so without further ado it's time to...RANK STUFF.

Great "Who's Your Daddy" Moments In Virginia Tech History

1. This video needs no introduction. This moment was so great it inspired me to make a custom t-shirt to commemorate the occasion. That shirt is still in my closet to this day. But I digress, here's the moment.

3. Ummmm... - I can't really think of any other moments for this. I just wanted an excuse to post that Seth Curry video. If you can think of a "Who's your daddy" moment that I missed, feel free to add it in the comments.

1. The "Soft Kitty" Song From Big Bang Theory - I don't like the show, but I think this song is more intimidating than any quarterback play that's going to come from Mr. Savage.

2. The Fuzzy Material That Surrounds A Calf's Testicle - I don't know why I keep coming back to this analogy, but it amuses me because I have the maturity of a pre-pubescent school boy. Regardless, this statement still stands true. That fuzzy material will really get after ya, which is more than I can say about Tom Savage.

3. The Strawberry From Cloudy With A Chance Of Meatballs 2 - Look at this guy! If you don't see stone-cold killer in it's eyes, perhaps you aren't looking hard enough. This thing is what nightmares are truly made of. Tom Savage, on the other hand, is not. 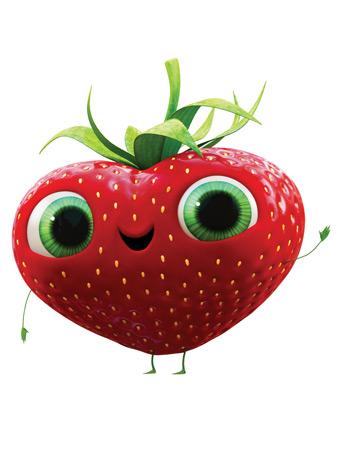 4. The Washington Redskins' Defense - Not particularly savage, but even a blind squirrel finds a nut once in awhile. Shots = Fired. Come at me, bro.

5. A Tamed Rabbit - I don't know why I picked a rabbit for this, but that's the direction I've gone with and I'm going to stand by it. If you'd rather, feel free to substitute any other soft, fuzzy and generally non-threatening animal of your liking. I won't judge. In this case, I've seen more threatening rabbit humping than quarterback play from Tom Savage.

1. Dadi Nicolas - I've already given significant praise to Mr. Nicolas in this article seeing as I named the first list after him. Talk about flattering! But I need to re-state that Dadi Nicolas was Virginia Tech's best player against Pittsburgh. His move to the linebacker spot caused plenty of headaches, figuratively and literally, for Pittsburgh's offense. James Gayle said it best during the post-game press conference, "If they keep him at that position, it's going to be a problem."

2. A.J. Hughes - The punter? Yes, the punter. Hughes has been incredibly efficient when he's had to step in and punt this season, which has been quite a bit given the offensive struggles at times. Hughes only had to punt four times against Pittsburgh, but still averaged almost 53 yards per punt. That is ridiculous consistency. Hughes makes it even harder for opposing offenses to make things happen against Virginia Tech's already stout defense.

3. Logan Thomas - Thomas didn't have a great game by any measure, but he did enough to help the Hokies win the game. For the third straight game Thomas didn't throw an interception, which has been a pleasant surprise after the rough beginning to the season. He completed 19 of 34 passes for 239 yards and a touchdown. Again, those numbers won't jump off the page at you, but they're good enough to win.

4. Kalvin Cline - Cline caught Virginia Tech's only touchdown of the afternoon early in the first quarter. That touchdown also just happened to be his first career touchdown. As a true freshman Cline has stepped up and become a major contributor with the injury to Ryan Malleck. Against Pittsburgh, Cline caught four passes for 65 yards and a touchdown. Once he becomes more well-rounded in run blocking, Cline should be a very good player for Virginia Tech,

5. Derrick Hopkins - Hopkins had two sacks against Pittsburgh, and generally caused havoc for the Panthers. Hopkins was part of a defense that sacked Tom Savage eight times, and could have been in the double digits if not for about eight missed opportunities. Hopkins has been a stud this year on the interior of the defensive line and he continued that trend against Pittsburgh.

Things Harder To Do Than Sacking Tom Savage

Things Kyshoen Jarrett Can Catch Easier Than A Punt

1. Gonosyphaherpelaids (Don't bother looking this up because it doesn't exist)

3. The grand-slam ball that David Ortiz hit to beat the Tigers

4. The disease from The Walking Dead that causes you to turn into a zombie (That season premiere, though!)

5. Mewtwo without a master ball

1. Marshall - Rakeem Cato is a legitimate quarterback and they have a very solid core of wide receivers. Not to be overlooked, Essray Taliaferro (hell of a name) is a hell of a running back. Against a stout Virginia Tech defense he rushed for over 100 yards. Marshall lost a close game at Ohio before traveling to Lane Stadium, but I don't think Ohio is a bad team. I expect Marshall to win around eight games this season and go bowling.

2. East Carolina - East Carolina is another team that's better than most people will give them credit for. The Pirates have a statistically strong rushing defense and an offense that can put up points in a hurry. Shane Carden is a menace to deal with, and is exceptionally accurate when throwing the ball. The Pirates beat up on North Carolina in a big way, thus making Virginia Tech's win look better.

3. Georgia Tech - Georgia Tech's offense is a legitimate pain to deal with, but the Hokies had no problem shutting it down. Vad Lee is a pretty decent quarterback for their system and has proven he can help this team put up points against lesser defenses. The Yellow Jackets have fallen apart of late, though, with three straight losses. Georgia Tech could continue to slide down this list if the slide continues.

5. North Carolina - North Carolina is a shell of a once-threatening program. The Hokies' offense looked, well, legitimately good against the Tar Heels in the first half. UNC seems destined to be toward the bottom of the ACC this season barring a ridiculous turnaround.

6. Western Carolina - Not much to say here. The Catamounts have beaten DII school Mars Hill for the third straight year. That marks their third win in the past three seasons, all coming against the same school. That's not necessarily high praise for your program. Western Carolina had some fight in them, but in the end were just overmatched talent-wise. They got a nice paycheck from this game, so everyone wins in the end...except the fans.