We take a look at the design and execution of Kalvin Cline's first career touchdown catch as a member of the Virginia Tech football team.

Foreword: I hope you all are sufficiently satisfied with my MS Paint skills.

Kalvin Cline's touchdown against Pittsburgh marked his first career touchdown as a Hokie. It was also the only touchdown Virginia Tech would score against the Panthers. I decided to do a closer examination of this play to find out exactly how it happened. After examining the play, I conclude Cline's touchdown was mostly a combination of unfortunate position by Pittsburgh's defense and great toughness by Logan Thomas.

As you can see from the diagram below, Cline is lined up on the right side of the play. His designed route is a fade to the outside. Willie Byrn is supposed to run a short drag route, while DJ Coles places a pick for him before running upfield and cutting toward the middle of the field. On the far-left side of the field, Dimitri Knowles is matched up against a cornerback and is supposed to run a simple out-and-up route. The goal of this play is to find an opening on one of two deep passes, or to find Byrn for an easy checkdown and let him run for the first down. 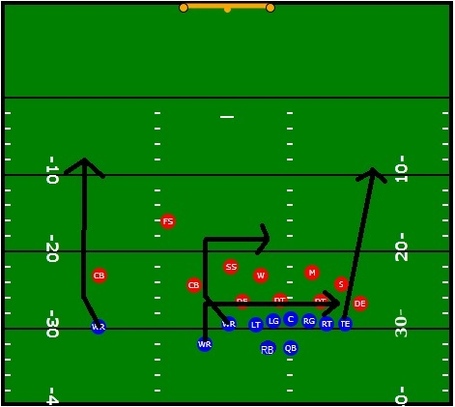 The play starts out well, with Cline being seemingly matched up against the strong-side linebacker. Before the snap, Willie Byrn was aligned next to Cline. Thomas sent Byrn in motion next to DJ Coles on the far side of the field, bringing the cornerback that was initially covering Byrn with him to the long side. The motion of the cornerback told Thomas that Pittsburgh was running a man-to-man coverage scheme. This also left Cline with a one-on-one matchup with a linebacker, with both safeties to the left side of the field. 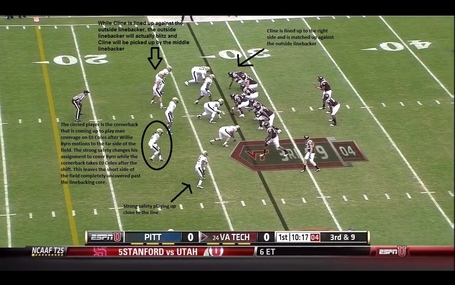 As you can see, there was no one in the defensive backfield on the short side of the field to prevent a long throw on that side. Pittsburgh gambled here by leaving the speedy Cline matched up against a slower linebacker. 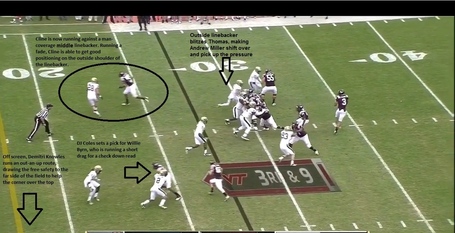 DJ Coles did a great job of setting a pick on the strong safety that was supposed to be covering Willie Byrn following his shift from the short side of the field. The strong-side linebacker blitzed, leaving Cline matched up against the middle linebacker, who was aligned just outside of the right hashmarks. This alignment was crucial to Cline getting open on this touchdown. 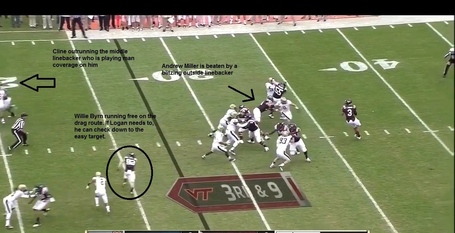 By this point, Cline had beaten the middle linebacker to the outside. He had strong positioning over his outside shoulder, and had the linebacker running with his back to Logan Thomas. Meanwhile, Andrew Miller was beaten by the blitzing linebacker, who was barreling toward Logan Thomas. Thomas had a decision to make - did he A) Check down to Willie Byrn, who was running free by this point, but would have to run about seven yards to make the first down or B) Throw it up to Cline, who Thomas was currently eyeing while going through his progression. Thomas would eventually go with choice "B" and it would work out well. 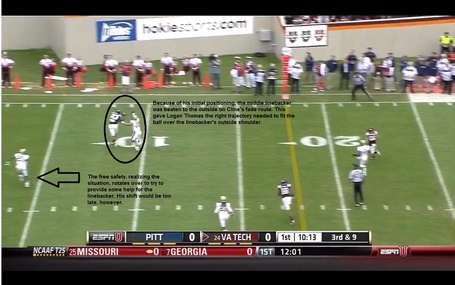 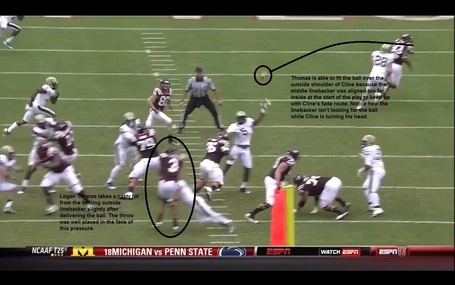 This viewpoint illustrates the angle that Logan Thomas was able to take when throwing the ball to Cline. Thomas was able to get the ball over the arm of a defensive tackle who tried to bat the ball down. You can also see a blurry image of the shot Thomas took from that blitzing linebacker. Most other quarterbacks would fold under that impending pressure, but Thomas stood tall and delivered the ball before taking the hit. His toughness was crucial to this play going for a touchdown.

While the play design was fine, this play was executed for a touchdown partially as a bit of luck. Sending Byrn in motion pre-snap to draw the cornerback to the far side of the field was effective, but if the strong safety was aligned to the short side of the field, it's likely Cline doesn't get open like he was. Instead, Thomas is probably forced to throw the ball underneath to Byrn. Because the strong safety was playing close to the line of scrimmage, Thomas was able to take advantage of green space in front of Cline once he got past his defender. In the end, Pittsburgh's defensive alignment had more to do with the success of this play than the play design itself. If the Panthers had kept the strong safety over the top of the middle linebacker and placed the weak-side linebacker on DJ Coles, it's likely Cline doesn't get free for the touchdown.

Regardless of how it happened, at the end of the day a touchdown is a touchdown. Kalvin Cline certainly won't complain about snagging his first touchdown as a Hokie. The youngster has proven a valuable asset to Virginia Tech this year, and Hokie fans should be excited about his upside.