Two top-25, unbeaten ACC teams play in one of the top games of the weekend. At noon. #goacc.

SHUT DOWN THIS, GOVERNMENT *DX crotch chop*. Seriously though, good to see these kids still able to play.

Is this the real life? Is this just fantasy? Caught in a realign, trying to escape the A-C-C.
Open your eyes, look up to the skies and see, I'm just a poor ‘Terp, I need no sympathy. Because I'm easy come, easy go, living high, 4 and Oh.
Any way The Fridge goes, doesn't really matter to me, to me.
Swafford, just left your plan, now I've gone to the Big Ten. Signed a contract in the midwest.
Swafford, life had just begun. But now I've gone and thrown it all away.
Swafford, oo-ooh, didn't mean to make you cry. When I'm not back again this time next year, carry on, carry on as if nothing really matters.
Too late, my time has come, joining Rutgers down the line. Jerseys changing all the time.
Goodbye, everybody, I've got to go. Gotta leave you all behind and face the Maize and Blue.
Swafford, oo-ooh, I don't wanna die, I sometimes wish I'd never left you at all.
I see a little silhouetto of a man.
Urban Meyer! Urban Meyer! Will you do the Fandango?
Michigan and Ohio State, very, very fright'ning, me!
(Bo Pelini!) Bo Pelini. (Bo Pelini!) Bo Pelini. Bo Pelini doesn't know
Testud-o-o-o-o.
I'm just a Terrapin and nobody loves me. He's just a poor boy from the A-C-C.
Spare him his life from this monstrosity.

Another big game in the ACC Coastal. I reckon we want Georgia Tech in this one. Canes gonna Cane? or Jackets gonna Jacket? You decide!

After a wild 44-41 win over LSU (remember when the SEC had good defense?) last week, Georgia travels to Tennessee to play the team in faded-construction-cone orange. Chances are very good that Georgia scores 40+ again this week, maybe 50. I hope it's 50.

CAN A BULLDOG BEAT LSU FOR THE SECOND WEEK IN A ROW? probably not. Watch it. Or don't. I'm a nice guy, I won't hunt you down or anything. Chris.

Will it be a strong performance from the Sooners, or will they be D'Ohklahoma? You guys have no idea, I spent like 30 whole seconds coming up with that. I know, right? TCU's lost both of its real tests, a 37-27 loss to LSU and a 20-10 loss to Texas Tech. Oklahoma should be on its way to 5-0

Arizona State will wear these uniforms against Notre Dame: 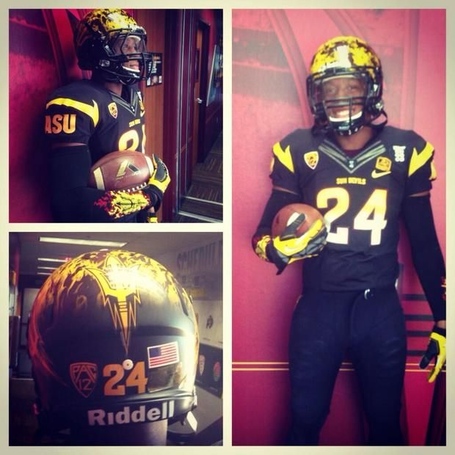 So, with Notre Dame being a Catholic school and Arizona State being the (sun) Devils, Bobby Boucher, does this mean it's Heaven vs. Hell? No. What are you, stupid? Arizona State beat dat ass last week against USC. So badly that the decision to fire Lane Kiffin was made during the third quarter (supposedly).

We find out if Northwestern is for real as they host their Ohio neighbors. What's that? Ohio and Illinois aren't neighbors? Thanks for that correction, Carmen San Diego. Also, how many teams post 40+ points on two BCS-Conference teams, but score fewer points against a FCS and a non-BCS team? Probably more than I really think. Ohio State answered questions with a big win over Wisconsin last week, but get another strong test.

Yeah, this is all I have for this game:

Pretty big game in the PAC-Whatever. Is Tyrone Willingham still the Washington coach? No? He hasn't been since 2008? Huh. How about that. Guess they'll have to hope Jake Locker can win it for them.