Feel free to use this as an open thread for Saturday's games before switching to the Virginia Tech/Virginia game.

Imagine heavy metal blaring with this and do the same.

FSU has one last regular season obstacle before playing in the ACC Championship Game and, presumably, the national title game: the Florida Gators team that lost to Georgia Southern and did this: 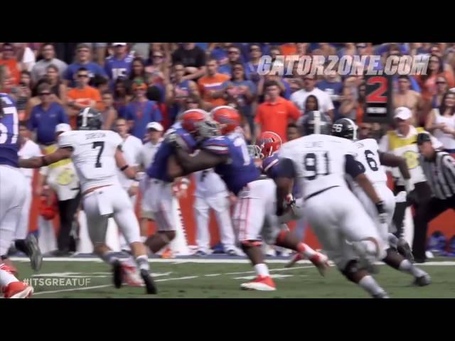 I hate both of these teams. Can we get a tie somehow? Well, go Michigan I guess. Although, IT WAS A CATCH. Ohio State needs this to keep its national title hopes alive and you KNOW Michigan wants to spoil that if possible.

IS THIS A RIVALRY? I NEED HELP UNDERSTANDING WHY I PUT THIS ONE DOWN.

This game is enormous for Virginia Tech's ACC Coastal chances. In order for the Hokies to play in the ACC Championship Game, UNC MUST win over Duke (possible) and Tech must defeat Virginia. So--ugh--go Tar Heels I guess.

The biggest Iron Bowl since Cam Newton's Auburn team beat Alabama 28-27 in 2010. This should actually be a really good match-up and I plan to have it on in unison with the Tech-UVA game. I think Alabama's defense will be the key in this one, being able to stop Nick Marshall will give their offense plenty of wiggle room.

A TEXAS SIZED BATTLE! In reality, Baylor should be able to roll TCU and well, they kind of need to to keep Big 12 title hopes alive (they would also need Oklahoma State to lose to Oklahoma and then beat Texas in the final week of the regular season).

Yeah, whatever. You should be watching VT/UVA instead. You really should. You're still watching this one? GO BACK TO GEORGIA.

This is Clemson's last chance to lock up an at-large BCS spot and well, you can bet the Old Balls Coach is going to do what he can to prevent that.

You guys, I honestly don't have anything to write about this.

Is this a rivalry? If it needs a name, I dub it the Ex-12ers Crapfest of Crap. I know that's not exactly catchy or family friendly, but whatever. LEAVE BRITTANY ALONE! There's a chance this could be Johnny Manziel's last SEC game as he's expected to decide on his NFL draft status soon.

In the Battle of Los Angeles, which lets take a second to discuss this here: that album is great from start to end. Starting it with a song like "Testify" and rolling straight into "Guerilla Radio" and "Calm Like a Bomb" is excellent. "Mic Check" throws things off a little bit, but BAM! right back in it with "Sleep Now in the Fire" and it's solid until the very end. It's actually kind of fitting that I started talking about it like this since the album has some clear nods to 1984 and this is Hate Week, after all. Wait, what now? Oh, football. Could Ed Orgeron lock up the head coach spot at USC with a win?

Late game. You get nothing. Eat turkey and go to bed.