After a week of terrible recruiting luck, the Hokies responded Sunday afternoon when Andrew Ford, a quarterback out of Cedar Cliff High School in Camp Hill, Pa. committed to Virginia Tech. Ford's commitment now gives the Hokies 10 for the class of 2014. For a complete breakdown of Ford's highlight tape and analysis of his commitment, continue reading below.

It certainly hurt the Hokies' cause not being able to land either David Cornwell, the nation's top-rated quarterback by 247Sports, or Jacob Park, another top-10 quarterback nationally that the Hokies were linked to. But on Friday, both committed to SEC schools, Cornwell to Alabama and Park to Georgia. Making matters worse is that the Hokies had already missed on their contingency plan, Mason Rudolph, who on June 5th committed to Oklahoma State right after a visit to Virginia Tech, causing many to believe that the Hokies would be the pick.

Furthermore, Tech lost out on Zack Darlington, rated just outside the top-10 quarterbacks nationally by nearly every major recruiting service, the same day as Cornwell and Park, as he committed to Nebraska. In addition to those offers who had long ago committed elsewhere, left the Hokies in a pinch at the quarterback position for the 2014 recruiting class, a class that they had wanted to take a quarterback in for reasons of depth and assurance that they would have their future signal-caller in one of their 2013 or 2014 guys.

Enter Andrew Ford. Ford, a four-star recruit by 247Sports, received an offer from the Hokies after their near-misses on Friday when the coaching staff were going down their board of next-best available. Ford, who camped with the Hokies on June the 2nd, deliberated for a few days before making his decision yesterday:

After much thought and many prayers, I am proud to announce that I will be continuing my academics and athletics at Virginia Tech #GoHokies

What made it even more special was that Tech defensive back commitment C.J. Reavis had announced there would be a commitment a few days before and in the minutes leading up to the announcement, as he's been recruiting his peers hard to join him at Virginia Tech:

Scout's player evaluation lauds him for his accuracy/consistency, decision-making and intelligence, calling them strengths, while pointing out his weaknesses as size and touch, listing them as areas for improvement. They also said this about him:

"Ford is an accurate passer with good arm strength. He is able to go through his progressions well and can make the intermediate and deep throws. Ford can move in the pocket but he is not considered a dual-threat player."

As for his junior statistics, Scout listed them as follows:

Ford also was named an Elite 11 quarterback, an honor bestowed on 24 high school quarterbacks who battle each other to finish in the top-11 and ultimately to be named the top quarterback at the camp which culminates with a week-long competition in California at the end of June with quarterback gurus. To be on that list means that Ford is certainly considered among the top quarterbacks in the country.

Though he only had three offers listed by the major recruiting sites, the Hokies, Temple and Massachusetts, he claims to have had 11 offers in total, though he did not make some public as they were contingent upon him visiting the schools in question.

Ford, by the way, said he had about 11 offers. Didn't make them public during process. VT, UVa and Pitt were his top three. #Hokies

It was interesting to see UVA listed among his top-3 as I hadn't even heard about their pursuit of him or listing of them as an option for Andrew. At any rate, don't ever say the Hokies never beat out the Cavaliers for a prospect in the Mike London era.

Ford's recruitment has also picked up considerably since being named an Elite 11 quarterback, and now the challenge will be to keep him committed to the Hokies. With a quarterback guru of his own to shepherd him through his collegiate years in Scot Loeffler, it would appear that Tech should be able to do that:

Ford was at VT in early June and met w/Logan Thomas, who told him he's learned more under Loeffler in 3 months than he did previous 3 years.

Now time to shed the rankings break down his tape. Follow me into the land of highlight tape to see how good of a get Ford really is:

Let's start with his sophomore tape, which is readily available on YouTube. First here are his sophomore stats from the beginning of the video: 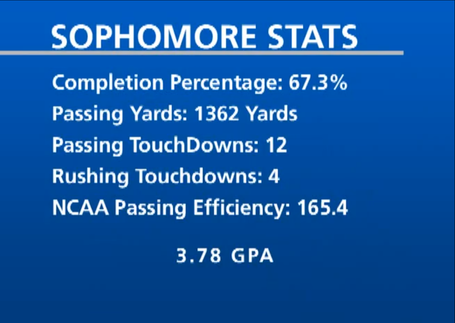 Then we'll move on to his junior tape:

And the last video worth sharing with you is his Elite 11 camp tape from late April:

After watching those three videos and the other ones on the internet, here's what I realized about Ford:

All in all, it looks like the Hokies gained the services of a very good quarterback fundamentally with a live arm, decent ability to get out of the pocket and great ability to make a throw in that circumstance. Even though they missed out on many of their higher targets, make no mistake: Andrew Ford is very good in his own right and will challenge for immediate playing time given the Hokies quarterback situation in 2014.

For all your Virginia Tech recruiting needs, including breakdown of prospect videos (which will be forthcoming today on Ford) and commitment news, Gobbler Country is your best FREE resource on the internet.