Erick Green Drafted No. 46 By The Denver Nuggets

Share All sharing options for: Erick Green Drafted No. 46 By The Denver Nuggets

After a long wait on Thursday night, Erick Green was finally drafted by the Denver Nuggets with the 46th pick of the NBA Draft (a Utah Jazz pick that still has not cleared NBA approval at the time I'm writing this post, but is in a proposed trade to Denver, so Denver was making the pick) UPDATE: THE TRADE IS NOW OFFICIAL.

Green was the only player who the Nuggets will be getting from this year's draft. Here is what the trade that brought Green's pick to Denver looks like:

According to ESPN, the trade that sent Erick Green's pick to Denver is constructed as such: It's pretty simple. pic.twitter.com/LSd4gUku3U

Let's start out with the Nuggets' current salary/personnel situation (keep in mind this does not include Green): 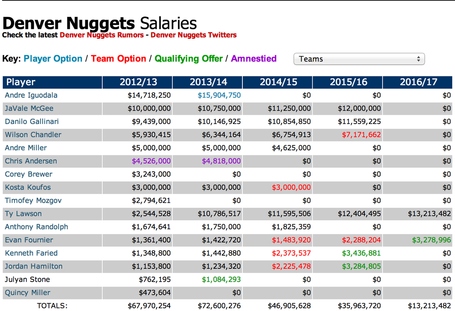 Obviously they have a lot of players under contract next year, 10 not counting Andre Iguodala, who plans to opt out, or Julyan Stone who has yet to be extended a qualifying offer (but probably will be from what I've heard). Ty Lawson is going nowhere, as he is the closest thing the Nuggets have to a franchise player (as the salary indicates). So that means it will be hard for Green to start at point guard at any time in the near future, unless he (or Lawson, but again, read above) was on a different team. Andre Miller, who figures to be Green's primary competition to be Lawson's backup, probably has the edge as he is still productive (9.6 ppg. and 5.9 apg. in 2013) despite being 37 years old.

Perhaps the Nuggets drafted Green because they saw him as the potential successor to Miller's role as Lawson's complement off the bench. While some think it's a bad situation to be in, I think it's an excellent one. Yes, Green will have to fight pretty hard for a roster spot on a deep team, one who might not want to keep three point guards. But, Miller has slowed in the last couple of years and is only on a contract through 2015. And according to this tweet:

According to SB Nation Denver, Nuggets' Andre Miller is guaranteed $5 million next season and $2 million the next.

So the deal is not fully guaranteed. Also, Miller might himself decide to step away from the game and retire instead of playing through the deal, which would make him 40 his last season. Not many basketball players can do that. Though he is not as adept at the shooting guard position, that might be where Green will get most of his minutes early on depending on how the Nuggets handle their personnel this offseason.

While Green fell much further in the draft than was projected, he ended up in a better situation than he might've with some teams, so that should give him some comfort. Also, the Spurs and Celtics, two teams that were supposed to have serious interest in Green (as was reported before the draft), decided to go the other way. There were rumors that Green held a promise to be drafted by San Antonio at No. 28, but just like in 2007 with Zabian Dowdell, they proved not to be true.

While Green's deal will not be fully-guaranteed, he'll have every chance to make the Nuggets roster in 2013 and become the only Hokie in the NBA.

For more on Erick Green, including what will likely become following him for his entire career, nobody will match the level of coverage that we'll bring you here on Gobbler Country.