Brady Taylor Commits To The Hokies, Makes OL No. 5 In 2014 Class

Share All sharing options for: Brady Taylor Commits To The Hokies, Makes OL No. 5 In 2014 Class

Virginia Tech received some heartening albeit surprising recruiting news this evening, when Columbus, Ohio offensive tackle Brady Taylor committed to the Hokies over Kentucky (his final two) and offers from at least seven, but possibly as many as 10 other power conference teams.

Taylor had been rumored to be a Kentucky lean up until the very minute of his commitment, including a 90% chance experts from the 247Sports network that he would select the Wildcats (with the only vote against coming from SB Nation's own Brian Favat).

In addition to 247Sports, former Virginia Tech and now Kentucky beat writer retweeted a tweet from a Kentucky 2014 recruiting class account that is apparently run by the commitments, which hinted at the coming commitment. Likewise, Matt Jones sent out a tweet that came just short of saying that Taylor had committed to the Wildcats. That tweet is now removed, so we can only bring you this below: 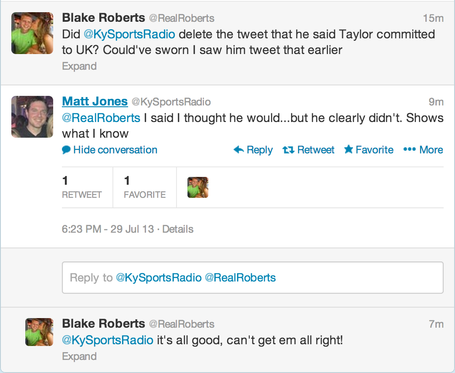 Taylor's commitment gives the Hokies five offensive linemen in the 2014 recruiting class and now bumps their total up to as many as 18 commitments (or as few as 14 depending on which service consulted). But the real victory, aside from bulking up on the offensive line, where the Hokies needed more depth after an abysmal stretch of recruiting at the position over the last five years, is that they won this battle over a resurgent Kentucky program (at least on the recruiting front) and other major players in power conferences. They also continue to tap the Ohio pipeline, something they hadn't done as well in recent years, which is important because of its typically good talent pool.

Speaks to how dramatically different recruiting has gone under Stoops that everyone surprised a kid picked Virginia Tech over UK.

As Taylor's highlights are on Hudl, we cannot break them down for you at the moment, but once we get the chance, we'll evaluate his film and provide it to you.

For all your Virginia Tech recruiting scoops, news, updates and analysis, make Gobbler Country your home on the internet.