2013 Virginia Tech Football: The State Of The Offensive Line

In 2012, the Hokies had one of the worst offensive lines of the bowl streak era for Frank Beamer, at least statistically. But watching the unit in action would tend to confirm those statistics. After losing two senior tackles and a utility lineman who could play and start at all five positions, the coaching staff is again forced to get some new blood out there on the offensive line. For a full prognosis of the unit, simply continue reading below.

Share All sharing options for: 2013 Virginia Tech Football: The State Of The Offensive Line

The Hokies offensive line in 2012 was the worst I could remember watching at Virginia Tech since I began watching in 1998. They generated little to no push in the run game (including the designed QB draw on 3rd and 4th down short yardage plays on which Logan Thomas converted at over 90% in 2011, and on which I believe he converted on less than 50% in 2012) and allowed 25 sacks on Tech quarterbacks.

But as mentioned above, it wasn't a case of young players not ready to assume their roles. In fact, despite not having started regularly until their senior years, both tackles for the Hokies last year were redshirt-seniors. Michael Via, a utility player along the offensive line who had starting experience at several spots, was also a redshirt-senior. And in the middle of the line, where the Hokies were starting two new guards, both of those players were in their third year of college football or more. At center they had a returning starter in Andrew Miller. So in fact, it was a relatively experienced offensive line, but the results just didn't match on the field.

So why didn't they? Well, for one, injuries doomed the interior of the line. Andrew Miller, most likely the best lineman on the team a year ago, only made seven starts before having to undergo season-ending ankle surgery. Likewise, left guard David Wang missed three games due to injuries, which have so far derailed his career, making it impossible for him to have a injury-free season to date. In fact, Wang has already received an infrequently-awarded sixth year of eligibility from the NCAA due to his past injuries. However, he is currently nursing an ankle injury again, the main cause of his past issues. So he is certainly an injury risk in 2013 as well. Also, Brent Benedict, a transfer from Georgia who was expected to come in and start, was underwhelming and only started six games in 2012.

In his "10 things to know" about the 2013 Hokies released earlier today, SB Nation Football Study Hall's Bill Connelly said of the Hokies 2013 offensive line "it has nowhere to go but up." In honesty, as much as Bill hit the nail on the head with each of his evaluations, the one he might've been a little too kind about was the offensive line. Yes, the Hokies are rid of three players who were a part of that porous 2012 line, but those were three of the Hokies best players on that offensive line. On top of that, the future of those two returning guards (one now displaced by the starting center of the last two years, Andrew Miller) has never been more uncertain. Here is a complete list of the offensive linemen the Hokies have at their disposal (less Wyatt Teller, who made the move to offensive line today): 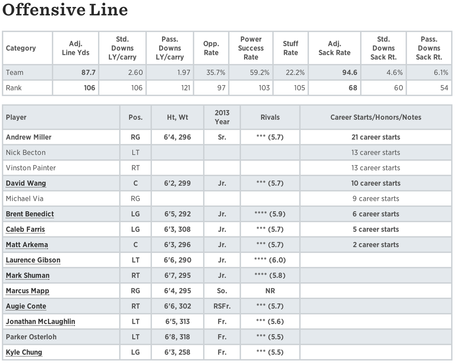 As a result of last year's injuries and poor play along the offensive line, the younger players below them on the depth chart had to step in occasionally (and in some cases for extended stints), and it was clear they were not ready or did not have the talent to compete on that level. So can that change for those players? It will have to if the Hokies hope to have anywhere near the year they would like to have. Of all the positions on the team, the OL unit is currently the worst when it comes to talent and depth. I'll stick with that statement until proven otherwise.

As of today, the depth chart has a freshman starting at one tackle, and though Mark Shuman, a redshirt-junior who has been expected to break out for some time, is currently listed at the other spot, he recently suffered a knee injury and is unavailable right now. The results of his MRI today are not yet available. However, offensive line coach Jeff Grimes has rotated all of the players around the offensive line so far in the pre-season as he had promised, giving each a look at every spot either in case of injuries/depth issues or to see if anyone stood out at a certain position. That is telling, as Grimes has said on the record that this is one of the hardest lines he has ever had to decide on, as no one is separating themselves.

That may be one reason that today, Wyatt Teller, a true freshman defensive lineman out of Bealeton, Virginia, who was one of the Hokies top recruits in 2013, moved over to the offensive line to play tackle. Teller also played the position in high school, and some have even projected him at that position, giving him rave reviews (though most think he projects as a defensive lineman). Whether Teller stays at the position and for how long will be interesting to see, as Teller was probably going to be redshirted with the depth on the defensive line. But if he is better than the crop of offensive lineman out there right now, why not use him, even if it burns his redshirt?

Further complicating the Hokies issues with their offensive line in 2013 is the fact that two players who were going to be counted on for depth have either left the program or been put on an indefinite medical hiatus since camp begun. Those players, Adam Taraschke and Jake Goins, may not have gotten a lot of playing time in 2013, but they were going to be relied on heavily in a worst-case scenario for a unit lacking depth. Now, the Hokies have two positions in which true freshmen or walk-ons are in line to see some time. And that's with a completely healthy unit, something they've shown an inability to have.

I outlined how poorly the line played in the Hokies only public scrimmage to date, often getting no push and alloqing running backs to be swarmed and gang tackled before they even made it back to the line. In the passing game, the results weren't much more promising, as the line allowed rushers to get to the quarterback on almost every play, forcing the coaches to blow the play dead to save the quarterbacks. Those two things scare me, because last year, the Hokies struggled with essentially those two identical issues. So regardless of the improvement of Logan Thomas and the young skill position players around him, if the line doesn't step it up, it could be another long offensive (you take that as a pun if you want to) season for the Hokies.

As for recruiting, the hiring of Jeff Grimes paid immediate dividends for the Hokies biggest position of need. The position had been long-neglected from a recruiting standpoint, and hadn't brought in any big talent in several years. Grimes has been revered for his coaching, but perhaps even more so for his ability to recruit linemen everywhere he's been, and that's essentially all over the country. While Tech might have to wait until 2014 to reap those rewards, the hope is that Grimes will be able to coach the current crop of players up, while improving their toughness and technique. If Grimes can salvage even a decent offensive line unit out of the current cast, he will be viewed as the patron saint of Blacksburg this year. But there is always a possibility that, no matter how touted Grimes is as a coach, the damage done under previous coach Curt Newsome is too great, in which case I'll adopt Bill Connelly's general thesis regarding the team about this unit: well, there's always 2014.

For more coverage of Virginia Tech football than you'll find anywhere else on the internet, Gobbler Country is your patron saint of Tech blogs. Be sure to join us here as we've got good stuff going up every day.