If the blocking on Trey Edmunds' touchdown is a preview of things going forward, Virginia Tech should be very happy with Jeff Grimes.

T.J. Yeldon had just scored from two yards out to put Alabama up 14-0. The Hokies were having trouble finding anything positive on offense. The first play from scrimmage following the kickoff had some excellent blocking and really put a spark in the Hokies. Though the final score wasn't in favor of Virginia Tech, there were several positives from the opener against Alabama. Namely the play of both the offensive and defensive lines.

We'll break down the excellent execution that lead to a 77-yard scamper from Trey Edmunds. 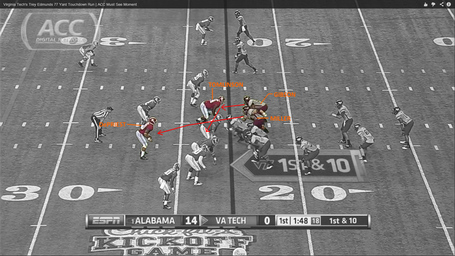 Alabama lines up with eight in the box due to the multiple options (Logan Thomas, Trey Edmunds, Darius Redman, Willie Byrn) in the backfield for the Hokies. The two linemen to watch in this clip are Andrew Miller and Laurence Gibson on the right side of the line. Gibson is lined up opposite defensive end Dalvin Tomlinson (#54), while Miller's first responsibility is the linebackers--Trey DePriest (#33) in this case. Look at how quickly Andrew Miller is off the ball and ready to get into the next level, clearing the way for Gibson to do his job. 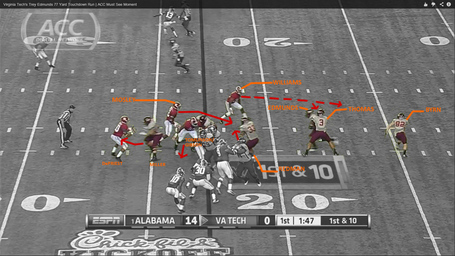 As the play develops, Gibson drives Tomlinson to the left side of the field and Miller takes his man further upfield. Jarrick Williams (#20) is caught having to play it safe and watch Logan Thomas and Willie Byrn in the event that Logan keeps the ball and runs to the outside with Byrn. C.J. Mosley (#32) reads the play well and begins to make his way towards Edmunds. Darius Redman comes across and gets just enough of Mosley to keep him from making a play on Edmunds. 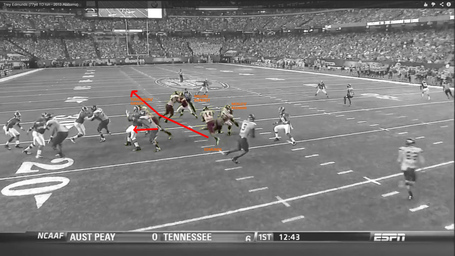 It's hard to see the Alabama defenders in this one, but trust me. Gibson has effectively taken his man out of the play and Redman is laying a block on Mosley to delay him long enough for Edmunds to hit the hole. As I mentioned to chicagomaroon yesterday in the comments section of his post, one of Edmunds' best traits is that he sees holes quickly and has great acceleration through them. He bursts through the hole created by Gibson, Miller and Redman and with his speed, that's all she wrote. 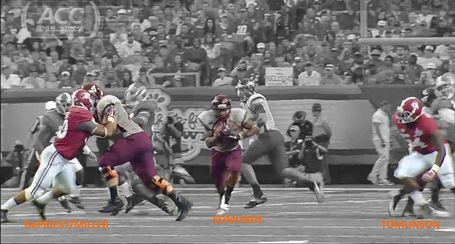 As you can see in this reverse angle, look how far Gibson has pushed Tomlinson down the line. Keep in mind that Tomlinson started the play on the opposite side of the line, but Gibson's blocking got him out of the way and cleared a sizable hole for Edmunds. In the video above you can see that Miller's man eventually gets around him and is in the vicinity of Edmunds, but by that time Edmunds is already kicking it into high gear and DePriest is still having to fight off Miller. Miller did a great job of making sure he was between DePriest and Edmunds for as long as possible while still keeping any yellow flags off the field.

Excellent, clean blocking the whole way round that gave Edmunds an opportunity to use his best asset and burn his way down the field for a touchdown.

I'm sure you could pull a handful of plays from last night that show the opposite, the offensive line missing blocks or letting up on them early. But as the offensive line's blocking has long been a sore spot for the Hokies, seeing something this well executed is encouraging.