This week is awful.

Yes, it is already week four of the college football season. Unfortunately, it's the fourth week of college football and there's MAYBE two good games on the schedule. As most teams (including Virginia Tech) are getting the last of their out-of-conference games in before the conference play starts in earnest. I had a tough time finding 10 "worthy" games, but I did it. YOU'RE WELCOME. This week I stray from my normal format because I really hate a lot of these games.

I'm serious. I struggled to get to 10. Have a look for yourself if you don't believe me.

This game has quite a bit of importance for Virginia Tech. Yet, you'll hopefully be watching Virginia Tech instead.

Why is this game on here? Because Central Michigan has some sweet uniforms for the game. I told you this week sucked. 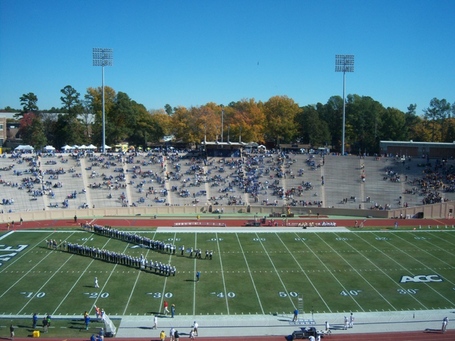 Last week, Tennessee gave up 59 points in a loss to Oregon. Oh, and all 59 points were scored in the first three quarters. Florida is 1-1, struggling out of the gate before defeating Toledo and then losing to Miami on the road--which was basically a home game. Gary Danielson recently called the Gators the most underrated team in the country. I don't buy it. Yet, given their upcoming schedule, they'll be 4-1 and in the top 10 heading into a game with LSU.

I think Notre Dame goes down in this one. Hell, they struggled with Purdue. The Irish continue their farewell tour of the midwest so mind your midwest manners in this one. Actually, I don't care. Jump on the bed, put your feet up on the couch, sneeze without covering your mouth and nose you barbarian. WE'RE ALL GONNA DIE ANYWAY.

Quite seriously, this might be the only game on the schedule that is worth watching. I plan to watch it, if eyes haven't fallen out of their sockets by this point. This will be the first substantial test for Stanford as they face a Arizona State team that narrowly escaped with a win over Wisconsin last week in one of the weirdest endings that I've ever seen. Okay, that I've ever seen a replay of.

GOOD OL' TEXAS SHOOT OUT. Probably not for one team, but I can dream. If A&M receiver Mike Evans tops his 279-yard performance from a week ago, I'll probably just go "wow, neat" and then remember that it's against SMU.

And this day mercifully comes to a close with a good ol' fashioned Utahn battle.

When image searching BYU football, I found this gem: 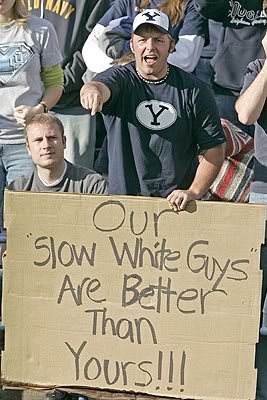