Hell, I own a few Marshall shirts.

And though I'm no longer dating that Marshall grad and have moved back to southwest Virginia, I can't help but feel ties to the university.

During my time in Huntington I noticed several similarities between the two schools and the respective towns which house them. Huntington is a blue-collar town and it's reflected in the approach that the football program takes. Sound familiar? Everything stops when the football team takes the field and you can hear cheers from the stadium from blocks away. Green and white drape the streets of downtown Huntington, much like maroon and orange do in Blacksburg.

But unfortunately the common thread between the two programs that is most prevalent is that of tragedy.

When Southern Airways Flight 932 crashed into a hillside just west of the Huntington Tri-State Airport on return from East Carolina in November of 1970, all 75 on board perished. Among the 75 were Rick Tolley and Frank Loria. Tolley played center and linebacker for Virginia Tech in the late '50s and early '60s before moving through the high school and collegiate coaching ranks. Tolley became head coach of Marshall in 1969 and his defensive backs coach was former Virginia Tech All-American defensive back Frank Loria. 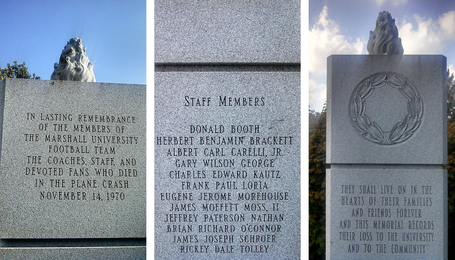 Loria was a teammate of Frank Beamer and Beamer has noted over the years that he looked up to Loria as a player and a person. As Beamer said of Loria in his recent book, Let Me Be Frank:

"He was such a neat guy. He was very quiet, but he had a sneaky sense of humor and you couldn't help but love the guy. I think he was always two steps more mature than the rest of us."

"He was smart and had great instincts for the position. And when he hit those receivers, it was just like a karate chop -- quick and powerful. He was a great punt returner, too, taking three punts back for touchdowns in 1966. Frankie was Virginia Tech's first consensus All-American and became the first player in school history to be named an All-American two straight seasons."

And finally, regarding the tragic Marshall plane crash that ended Loria's life:

"On November 14, 1970, I happened to be at Cheryl's house in Richmond, watching television, when the news came across the screen that the airplane carrying the Marshall football team had crashed while flying home after a loss at East Carolina. There were no survivors. I instantly thought of Frankie Loria. He was only 23 years old and he was their defensive coordinator. It was a terrible time, one of the saddest days of my life. Frankie was just a wonderful guy and he had a heck of a career in front of him. To be the defensive coordinator at that age tells you something about his football mind." 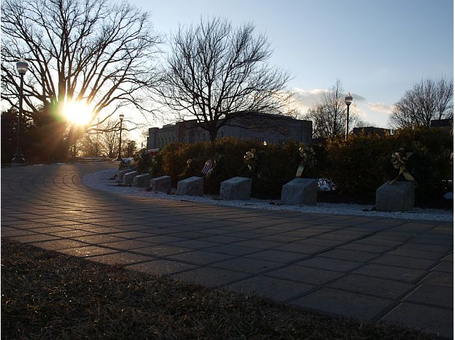 Over 36 years later, it was our community that experienced tragedy. Our community struggling to come to terms with something we didn't understand.

When the Hokies traveled to Huntington in 2011, Beamer visited the memorial at Spring Hill Cemetery to leave a piece of Hokie Stone to honor Loria and Tolley. Hokie Stone has taken on a bit of a new significance in recent years as 32 stones rest opposite Burruss Hall in memory of those that lost their lives on April 16. I can't help but think that Beamer thought of that significance at least once in Spring Hill Cemetery.

Though the root of each tragedy is different, the healing process was very similar. I met a few members of the Marshall and Huntington community that were around in 1970. Upon finding out that I was a Tech alum and was on campus the day of the shootings, they relayed a very real sympathy.

They had felt the same pain, relived the same heartache, dealt with the same frustration, and felt the same pride. A pride rooted in knowing that they would not be defined by the tragedy, but how they had healed together. The same pride that we have witnessed in our own community.