A Metamorphosis In The Running Game?

Has offensive coordinator Scot Loeffler had a change of heart about utilizing his quarterback in the running game?

Share All sharing options for: A Metamorphosis In The Running Game?

Those three numbers represent the number of rushing attempts by quarterback Logan Thomas through the first three games of the season.

Something has clearly changed in offensive coordinator Scot Loeffler's mind. What, exactly, has changed is very much up for debate. I have a few theories to what might have led to this new philosophy about utilizing the quarterback in the running game.

The running game for Virginia Tech took a hit before the season even got started. As you'll recall, J.C. Coleman sprained both ankles during the latter part of summer workouts and subsequently didn't return to action until last night. Trey Edmunds suffered a hip injury against Marshall, which curtailed his effectiveness late in the game.

Coleman and Edmunds are valuable weapons to this Virginia Tech rushing attack. Edmunds and Coleman both have the speed to stretch the field laterally, thus keeping the defense honest and setting up the read option. However, with Edmunds and Coleman banged up the Hokies had to look to the obvious solution - the behemoth quarterback, Logan Thomas.

Thomas has a prior history of being utilized in the run game. In 2011, Thomas rushed the ball 153 times. In 2012, that number grew to 174. When in short-yardage situations, Thomas has proven very effective at either picking up a much-needed one yard, or pounding the ball over the goal-line.

Thomas scored the game-winning touchdown against Marshall by running the ball. The same happened last night, as Thomas used his tremendous reach to stretch the ball across the goal line (accurately or not, it counted).

Injuries to the two leading running backs could have forced Loeffler's hand into utilizing Thomas more in the run game, especially since he is on record as saying he doesn't want to run Thomas as haphazardly as some spread coaches would perhaps be inclined to. Loeffler is very calculating when he chooses to run the quarterback, and he does believe running the quarterback is something you have to do in this day and age of college football. Maybe it's a bit lucky that when forced to go to his quarterback for a heavy load of the rushing attack, he had a quarterback as well versed as Thomas is.

However, and I'm sure Loeffler would be the first to say this, Thomas cannot sustain running the ball as much as he has through these past two games. If that happens, Loeffler might lose another rushing weapon due to injury.

Virginia Tech's offensive line is notably suspect in run blocking, while it has shown immense improvement in the pass-blocking department. This opens up plenty of opportunities for Logan Thomas to get involved in the run game.

Opponents are loading six or seven men in the box to counter Virginia Tech's running attack, which has long been a staple under head coach Frank Beamer. How has Loeffler countered this? He's using three, four and sometimes even five receiver sets. The logic being that if an opponent is going to stack the box to cheat against the run, Thomas can check to one of his many receivers. If opponents shift and expect a passing play, it could just as easily turn into a designed quarterback draw disguised as a pass from shotgun.

If Virginia Tech can keep making plays on the ground on what look to be passing plays, defenses will begin to start over analyzing the situation. Any defensive coordinator will tell you when players start thinking too much, things start spiraling out of control quickly. That's part of the skill set that Thomas brings to the table, the same one Beamer and co. have been raving about for years. He's extremely versatile.

One play he can drop back and hit D.J. Coles on a drag route, and the next play out of the same formation Thomas can fake like he's dropping back to go through his natural progression, and instead tuck and run once the defensive line gets too far upfield. Thomas may not have top-end speed, but he's quick and tall enough to shuffle forward and fall for three to four yards almost guaranteed.

Simply put, he's a matchup nightmare for defenses. Even if defenses read the play correctly and cover all available outlets, Thomas still has the ability to tuck the ball and scramble for yards. Even on broken plays, Thomas is still dangerous with his feet.

Scot Loeffler has a history of utilizing running quarterbacks. He did it at Florida and Auburn, and now he's bringing it to Virginia Tech. One of Loeffler's favorite plays is the inverted veer, which is diagrammed below. 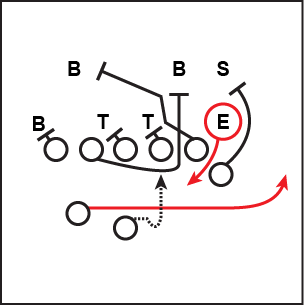 Logan Thomas has struggled making the correct reads at times this season, but seems to be progressing in making the correct decisions. What will be interesting to watch is to see whether or not teams start cheating up on Thomas, and thus giving the running backs some room to run on the outside.

I don't think that Loeffler was hiding this wrinkle from other teams, because we saw it used in games earlier this season. It may simply come down to the offense executing it better now than they had been. If that's the case, Loeffler isn't some sort of offensive genius, but he is discovering the strengths and weaknesses of his personnel against real teams. That's more than I could say about the previous set of coaches. And if Logan Thomas keeps slinging the ball like he has been, Virginia Tech will have plenty of options when it comes to the running game, by design or not.

I don't have all the answers to what has changed in Loeffler's mind to put Logan Thomas in the workhorse position of running the ball. My guess is that's it's a combination of my three theories, with each lending a bit more credibility to the one that follows. Whatever the case may be, Virginia Tech seems to finally be clicking on offense. Time to see if this new philosophy will pay off for Loeffler and the Hokies.