After the insanity of the opening week, where you couldn't avoid a good game if you tried, this week is the cupcake week for several teams. However, there are a few saving graces this week and keep reading to find them. It's like a scavenger hunt.

Normally I'll do 10 non-ACC games and then five (or sometimes all) ACC games. Given that there really aren't a whole hell of a lot of games of interest to choose from this week, you only get 10 this week. For those new to series, I always omit the Virginia Tech game because it's assumed you are watching it. RIGHT?

Miami hosts No. 12 Florida and HOLY CRAP MIAMI SOLD OUT A GAME. Given Tech's sellout streak likely ending today, that sounds kind of hypocritical, but not when you look at Miami's stadium for every other game of the year.

if this one isn't over by the end of the first quarter, then Mike London is a witch. He used to be a cop. And that would now make him a witch-cop. Don't mess with witch-cops, bro. They'll turn you into a newt and then book you for possession with intent to distribute.

Yes, really. Old Dominion vs. Maryland. I'm not going to post a preview for this one, just ODU's awesome helmets. 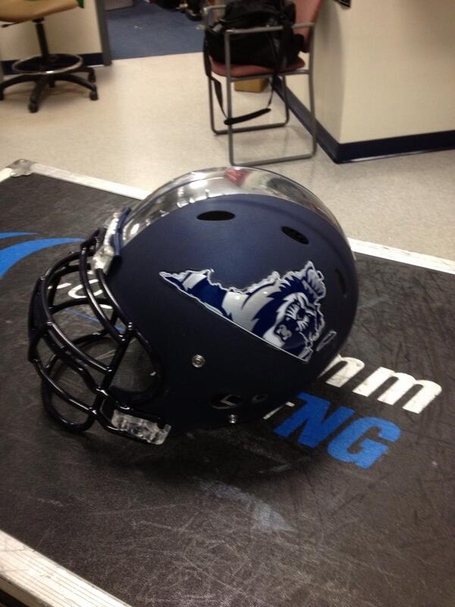 This is the big daddy on the slate this weekend. Two elite SEC teams (this year at least) square off for a big early-season match up. If you're watching at home, do me a favor and count how many times you hear ESPN commentators say "Jadeveon Clowney". My guess is in the upper billions.

Another reason to fear Spiders is that 15 of their players have made 10 or more starts in their careers, and that does not include transfer receiver Shane Savage, who was an all-American at Cornell in 2011. Led by a preseason all-American receiver in Ben Edwards, this is an experienced group. Defensive tackles Evan Kelly and Kerry Wynn are preseason all-conference picks by Phil Steele and have 37 career starts between them. Safety Reggie Barnette, another preseason all-conference selection, leads an opportunistic secondary that picked off three passes in a shutout over VMI last week. The Spiders snagged 24 INTs a year ago en route to a +23 turnover margin. They took ridiculously good care of the ball, giving it up just nine times for the season. The veteran group is unlikely to beat themselves.

Seer-a-cues travels to Northwestern for a game that, as an ACC fan, you hope will end with the Orange victorious.

I'd bet Northwestern ends up taking this one, but maybe Syracuse will pull one out of the orange stand. GET IT?!

The Longhorns' offense gets a good test against a strong BYU team.

A year ago, this might have been a big match-up. This year, Oklahoma is poised to embarrass West Virginia, who edged William and Mary by seven...at home. Now, the Mountaineers go on the road and to play against a solid Oklahoma team.

This is the other high-caliber game this weekend and also the last time Notre Dame visits the Big House. I'll miss Notre Dame and Michigan fans complaining about each other on twitter :(

I basically put this one on here for two reasons: 1. It's a late game, 2. Mike Leach pirating for gold. USC struggled a bit to find rhythm against Hawaii, so perhaps that would continue.