It appears the Virginia Tech Stadium Woods crisis has been averted after a long, drawn-out deliberation between those advocating for the new football practice facility to be built where the woods stand and those who wanted to save the woods at all costs. Read below for details.

The Virginia Tech Board of Visitors approved a plan today to go forward with the donor-funded indoor practice facility for the football program. The original proposed location of the facility was to be behind the current practice fields and where the north part of the Stadium Woods currently exist.

After opposition to the initial proposal from, among others, Save Stadium Woods and the Faculty Senate, the athletic department officials held a meeting with those concerned on December 15, 2011 to discuss the impact of building the facility on the suggested location versus the implications of moving it to another site. Shortly thereafter, Virginia Tech President Dr. Charles Steger appointed a committee to study the woods and the location of the practice facility.

The findings/suggestions of that committee and a consultant brought in by the university to settle the dispute, as well as factors such as environmental impact, aesthetics, stormwater management, cost of relocating other facilities and questions of access both for students and athletes were all considered. The options were ranked by a points-based system. In the end, the decision to alter the original plan was adopted, though it had been rumored that the Stadium Woods would be safe as far as several months back.

The details of where exactly the facility will go is in question, but according to Andy Bitter, he thinks it will be around proposed site number 10:

Haven't seen map of indoor practice facility's exact location. But I'd imagine it's something like site #10 on this: http://t.co/fnn3eJUedF

The facility will be approximately 200-by-408 feet according to Bitter (UPDATE: ACCORDING TO INSIDE HOKIESPORTS' JIMMY ROBERTSON, VIRGINIA TECH HEAD COACH FRANK BEAMER AND SENIOR ASSOCIATE AD TOM GABBARD, THE FACILITY WILL BE 210-BY-400 FEET AND HIGH ENOUGH FOR PUNTS AND KICKS), but that may have now changed due to the relocation from the original proposed site. The ramifications of locating the facility on that spot concerning the football program mean that the current outdoor fields will probably have to be shortened from anywhere between 25-40 yards (both fields are currently full-length fields) to accommodate the structure. The structure, which is completely funded by donors, is projected to be between $20-30 million dollars.

The woods, which encompass about 11.3 acres based on a ground survey estimate, are home to many old-growth white oaks, a rarity on the east coast. According to Save Stadium Woods, here is the original proposed site of the facility: 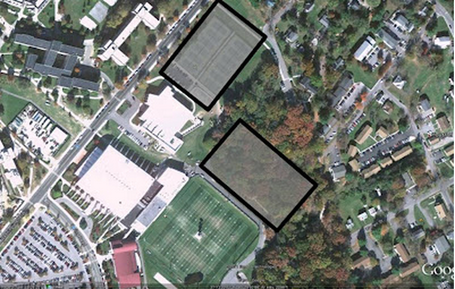 Here is the official PDF for the project where you can view all of the original potential sites for the facility as well as how they were graded. Here is also a link to the official press release from Hokiesports.

Fore more information about the newly approved indoor facility as more details are released, Gobbler Country will have complete coverage from all angles. Be sure and make us your home for Virginia Tech sports news.