Hokies in the NFL: Divisional Round

Share All sharing options for: Hokies in the NFL: Divisional Round

The number of Hokies alive in the NFL playoffs dwindled significantly after the Wild Card round, and it's now down to just Kam Chancellor and the Seahawks after the Divisional Round.

Kam Chancellor, S Seattle Seahawks -- Kam had an excellent day for the Seahawks, leading the team with 14 total tackles and four as solo efforts (though I question that "4" and think it was probably around 7 or 8). Kam came up and made four tackles that resulted in no gain and one that resulted in a one yard loss. He also was credited with two passes defended, and if I remember correctly, both should have been interceptions. I know for sure one of those was one that Bam Bam had in his hands and dropped. Kam and the Seahawks will advance to the NFC Championship and will play divisional rival San Francisco. Should be a hell of a game.
14 TAK, 4 SOLO, 2 PD

Shayne Graham, K New Orleans Saints -- On the stat sheet, Shayne had a bad day with both field goal opportunities missed. However, the first field goal attempt was from 45 yards out and Luke McCown's hold was bad, with the laces facing directly towards Graham. You'd think that it wouldn't matter too much, but it does. This spawned all sorts of these tweets: 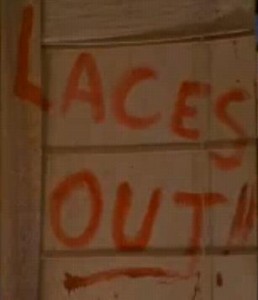 Graham's second field goal attempt was from 48 yards out, into the wind and on a slick surface. Safe to say he missed it. He made the PAT opportunity and then his ensuing onside kick effort was recovered. Yet Marques Colston did one of the weirdest things in for a professional football player to do to end the game.
0/2 FG (X45, X48), 1/1 XP, 1/1 ONSIDE

Eddie Royal, WR San Diego Chargers -- Eddie and the Chargers had a very slow start and mounted a comeback in the fourth quarter (led primarily by Keenan Allen). Eddie finished the game with one catch for 30 yards. He was "targeted" one other time, but the pass was a pushed wide by the wind.
REC, 30 YDS