So here we are, and with National Signing Day looming on February 5th this hire is critical to the improvement of the Hokies much maligned offense, and it's potential impact on this years’ offensive line recruiting class. It probably feels a little like deja vu. This time last year the Virginia Tech Football program was undergoing an offensive face-lift which included the hiring of former Auburn Offensive Line Coach Jeff Grimes. The hire was well-received by the Hokie faithful and drummed up excitement about a new attitude, and expected improvement in play. The honeymoon was short, however, and after just one season in Blacksburg, Grimes decided to join Les Miles’ LSU Tigers staff in Baton Rouge. The "Tip of the Spear" is no more, at least not for VT anyway.

While it is widely known that Beamer is not accustomed to coaching turnover, hopefully last year's overhaul that acclimated him to the pace of modern college football. He had no choice but to replace a quality coach with another quality coach. This hire, for better or worse is going to be crucial. Tech is on its third Offensive Line coach in three years and we know there hasn’t been a more scrutinized unit on the entire team for the past few years…honestly, even beyond that. Hokie fans should be pleased with his pedigree and thank coach Beamer for doing his due diligence. Prior to his time in Austin, Searels had coached in the SEC for perennial powers LSU and Georgia. The overall impression I got from LSU, UGa and UT fans regarding Searels is that he is a good coach and above-average recruiter. That is welcome news to most who’ve suffered watching the Hokies OL woes for some time now.

Here is a quick overview of his recruiting success (according to rivals.com) over the years while at his previous three stops:

That is an impressive haul. Some will argue, "Well look at the schools he was at – they essentially recruit themselves!" To a point, that is true. Searels though, still has to be able to go into a kid’s house and gain the trust of his mother that he will take care of her son. That is never an easy thing to do. In glancing over his O-line commits, I see a lot of four stars. Yes I know the star ratings don’t always point to success, but more often than not they are a good indicator. Nick Saban and Jimbo Fisher seem to believe in them, and they have the hardware that validates them.

What stands out to me more than his ability to secure quality lineman, Searels shows the ability to recruit other highly rated position players, including on the defensive side. He has also proved to be able to keep a majority of his in-state targets at home, which I’m sure is music to Coach Beamer’s ears. We can thank Coach Grimes for at least "leaving it better than he found it" and stocking the cupboard as best he could. Coach Searels will have some good young prospects to work with to accompany the four returning starters and two deep.

Overall, I think this is a good hire by Frank and I think most of us are happy to have an external hire (i.e no return of BS), especially with the relationships Searels has built in the past decade in Louisiana, Georgia and Texas which are considered some to be the most fertile recruiting grounds in the nation. Casting our net wider is something we’ve seen with our recruiting recently and I hope it continues. Coach Beamer realizes that he needs someone who can hit the ground running with and is on the same page with offensive coordinator Scot Leoffler, as he moves into year two of the Hokies offensive re-build. With two new QB’s and two highly rated running backs entering the program, it is expected that Coach Searels can get our line to perform at a championship level. 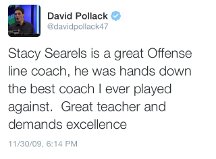