It has been reported that Texas Tech quarterback Michael Brewer (r-So) will make a visit to Blacksburg this weekend as he seeks a transfer and fresh start away from Lubbock.

As reported in the past few days and now confirmed by Richmond Times-Dispatch sports columnist Mike Barber, Texas Tech quarterback Michael Brewer (r-Sophomore) has been contacted by the Hokies staff and will make a visit to Blacksburg this weekend. 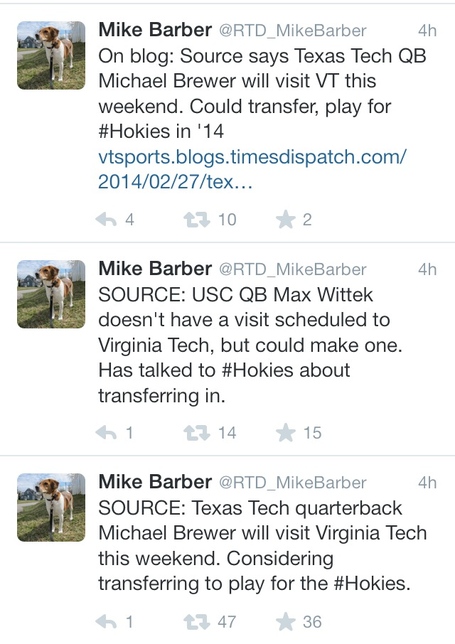 WHO IS THIS GUY?

Brewer, from Lake Travis High School (Austin, Texas) was rated the 12th best dual threat and three-star QB by Rivals out of the 2011 class. He stands at 6'1" and 185 lbs and has displayed good speed with an excellent arm. His high school coach was none other than Clemson offensive coordinator Chad Morris, which he won four consecutive state titles with. In limited action in his two seasons in Lubbock, Brewer appeared in 13 games tallying 440 yards on 41 completions of 58 attempts, which is good for nearly 71% completion percentage. He was recruited by some big named schools in: Auburn, Texas, Tennessee, Clemson, Arizona St and Baylor among others.

Brewer has expressed desire to stay home in his native Texas so that his family could attend games more easily. Two in-state schools also in the Big 12 who have his master's degree program are Texas and TCU, in which he has indicated interest. Brewer has completed his bachelor's degree requirement in only three years, thus allowing him to play for another D-1 program immediately. The problem here is, Texas Tech head coach Kliff Kingsbury and a five member panel of the Texas Tech Athletics Council have denied his request to seek transfer to either of the two programs; which is usually the case for teams in the same conference, let alone state.

I think the visit by Brewer and to a lesser extent contact made to USC quarterback Max Wittek (also a potential transfer prospect) raises a few eyebrows around Hokie Nation, particularly after head coach Frank Beamer stated "Mark’s the next guy in line here, he had a couple tough throws. He’ll learn from that...That’s not a great situation for your backup guy to step into. But I’ve got a lot of confidence in Mark. I’ve seen him in practice too many times."

My question is, why are we now going this route when the Tech coaching staff seems to already have a good succession plan in place? The thought was to play Leal this year with Andrew Ford (who enrolled in January) or incoming freshman Chris Durkin and Travon McMillian to potentially serve as the key backup while the others use their red-shirt seasons. Also listed at QB is rising red-shirt sophomore Brenden Motley, a local product out of Christiansburg High School who has great size (6'4" 215 lbs) and speed and deserves a crack. In addition, former four star QB recruit in 6'7" Bucky Hodges has recently been announced he'll be switching positions to TE moving forward.

Historically, Hokies head coach Frank Beamer doesn't look elsewhere to fill holes in his roster, rather grow it organically from recruiting kids from high school and a few from prep schools, or just by changing players' positions. Rarely, does he look at JUCO's or accept many mid-career transfers, let alone at the QB position. Beamer is known to play more experienced players as he refers to having that "trust" in them to execute plays and maintain their assignments, minimizing mistakes.

How is a guy who has been in the program for four years look so unprepared and unsure of himself? We've caught very few and brief glimpses of Leal throughout his Tech career, making only seven appearances (all mop up duty) accumulating 334 yards on 28-48 (58%) two touchdown passes and two picks. Was there any forethought by the coaching staff to understand and recognize that we could possibly be in this situation? No player is invincible, not even a 6'6" 260 lb. battering ram of a quarterback. I would've expected Coach Beamer to find spots in certain games (especially when Logan Thomas was struggling) to get him some more experience so that he's not so green as a fifth year player.

DOES HE REALLY WANT IT?

I'm not going to let Mark Leal off of the hook that easily either, despite the odds against him playing at all in the Sun Bowl vs UCLA, he knows the game well enough to understand he's only "one play away" from being the man under center. I would've expected for Leal to have a little bit more of a sense of urgency especially since he is the odds on favorite to be QB1 next season. It looks like he has gone through the motions. He did not look anything like an accurate guy who seems to be able to manage the game and take care of the ball, which is what we've come to expect having seen him in previous Springs and limited duty. Leal finished the bowl game going 12-25 for 130 yards and two interceptions (one of which was especially terrible). It was fairly obvious that Leal was just caught by surprised and not mentally ready to take on this task, and that situation was exacerbated by horrendous line play in front of him.

It's hard to say whether Coach Beamer and offensive coordinator Scot Loeffler were tinkering with the idea of bringing in a transfer before this past season concluded, or if it was a result of watching Leal's underwhelming performances in practices and in the Sun Bowl? I'll take a guess and attribute this more to coach Loeffler's advice and perhaps indication that he's not fully comfortable moving forward with Leal. He needs some time to get the three freshman up to speed during their QB battles and would like to be able to count on someone for not just one year, but two. Maybe it's so the Hokies will not have to force a red-shirt freshman into action for the 2015 season.

Whatever the strategy may be, it's a good thing that the coaches are trying to bring in the best possible players they can. That alone deserves a thumbs up from the Tech faithful but also makes you scratch your head and wonder why it took so long for the coaches to recognize the inevitability of this situation. One would think they'd have come to the proper conclusion long before now. Additionally, it'd be interesting to know what has changed in this quiet period leading up to Spring practice. It's not as though Leal has been out on the field having poor practices. Regardless, it's no secret that quarterback is the most important position on the field.

With VT signing three good prospects in February and being active in the transfer market proves the coaches are addressing this glaring issue. And what is it that people usually say? "Where there's smoke, there's fire," we're going to see how big the fire gets in Blacksburg this spring and into fall practices.