Over the past couple of years, the Virginia Tech running game has struggled to be productive during times of change within the program.

The running back position at Virginia Tech is probably one of the most important and valuable positions for the program, especially over the past decade. The running backs of recent years have helped propel the football program to the forefront of college football. Just take a look at all the names:

The list is impressive, and it represents the "heyday" for the most prestigious offensive position the Hokies have featured dating back to the late 1970s when former running back coach Billy Hite first entered the scene. It seems like Virginia Tech has always had an elite feature-back at their disposal. 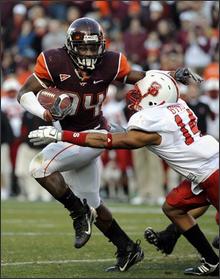 The success that the Hokies had during this time was remarkable. An era full of ten win seasons, conference championships, and impactful draft classes was the norm. Tech always had a stable of running backs they could turn to. The game plan was to run the ball, control the clock, and play great defense. But what has changed since then? What is the cause of this sudden drop off in running game production?

I don’t think you can point the finger at just one person. The program has focused on stability and tradition for over 20 years. But now things are changing. In 2011, Shane Beamer came back to Blacksburg as an associate head coach and running backs coach. After being running backs coach and producing many great backfields since 1978, Billy Hite was replaced by the young Beamer who had played at VT during the halcyon Michael Vick seasons. After the 2012 season, when fans saw their prayers answered with Bryan Stinespring being relieved of his duties as offensive coordinator. In this transition, former Auburn coordinator Scot Loeffler was brought to the helm of the offensive along with Jeff Grimes being appointed to offensive line coach and running game coordinator

In taking a look at the offensive line position, the lack of continuity there has been a struggle in it's own right. With Stinespring coaching the tackles from 2011-2012, Billy Hite Curt Newsome with just the guards and centers, and then Jeff Grimes taking over for just one year before jumping at the LSU job. Now with Stacey Searels as the new offensive line coach, it is the primary question for an offense that struggled mightily in 2013: Can the running game re-establish it's past consistency.

With the running game being so disappointing the past two seasons, Logan Thomas did all the heavy lifting for the offense, as he was often 65-70% of the offense, ranking in the top 10 nationally. He was relied on to produce some kind of rushing attack, as well as make the tough throws on third down after he had exhausted himself running the ball on the early downs of the series'. None of this fared well for Thomas because he had no one else to establish the running game and had no one who was consistently reliable to pass to. One thing that is common among the successful quarterbacks at Tech is that the running game could be relied on to win games, and to his everlasting credit, Thomas did his level best without.

The Virginia Tech program is going through hard times. The new offense doesn't focus on the ground and pound from years past and feature that every down back we are all used to seeing. Tech fans must face the fact that the team will not just be able to reload with new talented recruits like they once did. The program isn't as stable as it once was, and it’s going to take a few years before we see that kind of stability again.

Things appear to be looking up with new talent in this year's RB recruiting crop and hopefully coaches the team can go a few years without any turnover in the coaching staff. Last year was one of the most painful years ever for the VT rushing attack. But with Loeffler’s offense in it's second year of implementation, and incoming freshman running backs Marshawn Williams and Shai McKenzie (both already enrolled in January '14) look for major improvements.

My final words: Do not fear just yet, Hokies. This is just a speed bump and not a road block. The coaches are getting the players they need for the new offense, and all it takes is a little patience. Before you know it, Virginia Tech will be back at it like they once were.