As we were all glued to the television, watching the madness unfold, the news leaked that the Hokies found their new head basketball coach just four days after learning of former Coach James Johnson's dismissal. What does Williams' hire mean for Hokie basketball, and what does the future hold?

The past four days have been a roller coaster ride for the Virginia Tech basketball program and the Hokie faithful alike. On Monday it was made known that men's basketball head coach James Johnson was fired and a nationwide search for a replacement commenced immediately. Then on Tuesday at 9:30, Virginia Tech Athletic Director Whit Babcock held a press conference and issued approximately a ten minute statement regarding the dismissal of James Johnson, why the decision was made, and the process of finding a new coach. And now, on Friday evening, the news broke out that the new head coach of the Hokie men's basketball team is Buzz Williams from Marquette.

With the news coming so soon, twitter blew up after reports of a deal from Pat Forde of Yahoo Sports leaked out. Then one report after another came in and finally, an official report from Virginia Tech came, setting the deal in stone. Williams signed a 7 year deal worth $18 million and there's also $2.3 million in buyouts for Seth Greenberg and James Johnson and Jim Weaver's two-year consulting contract, which amounts to a $20 million expenditure on the Hokie basketball program.

Williams, was seemingly so excited he changed his Twitter profile immediately: 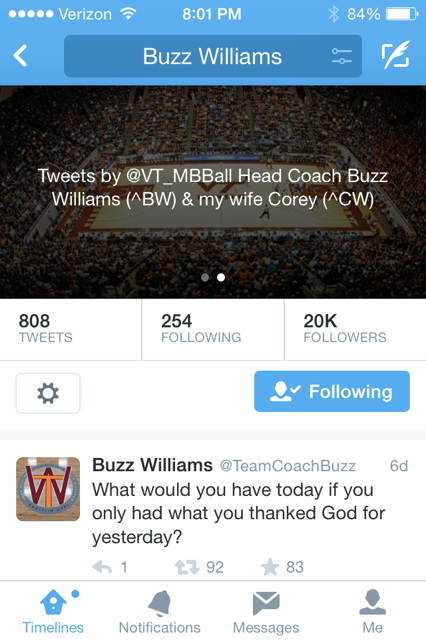 "I am extremely excited about welcoming Buzz Williams to the Hokie Nation," Babcock said. "Buzz is a proven winner who has earned his way up through the ranks with a strong track record of success. I am confident he will energize our fan base and help make Virginia Tech Basketball competitive in the Atlantic Coast Conference. I know he will recruit at the highest level."

Buzz Williams had this to say:

"It’s never easy to leave a great school like Marquette, where I spent seven wonderful years, six as the head coach," Williams said. "But this is a special situation to work at a place like Virginia Tech. I’ve heard tremendous things about this terrific institution and this is an outstanding opportunity to build a program. My family and I look forward to becoming a part of this great university and community, and taking on the challenges associated in succeeding in the ACC."

At the press conference on Tuesday, Babcock said that he was going to get the best coach possible to coach the men's basketball team. He also said that the first option was to hire a high profile established head coach with experience or get an up and comer who is lesser known nationally. Ultimately, Babcock said that he was going after the coach who is the right fit for Virginia Tech, a developer, a scrapper and a fighter to build a program. The main thing Babcock highlighted was that he wanted a coach who wins on the court consistently and shows great character and confidence.

He didn't shy away about money either, stating that he knew in order to get a big time coach, Tech would have to pay big time money. They did exactly that and gave Williams nearly 20 million reasons to come to Blacksburg. That's a lot of money folks! It's obvious Babcock had a plan of action and went after Williams as fast as he could, using his Big East connections like he said he would and let the money talk.

But what are we exactly getting with Buzz Williams? Here's his resume:

I think Williams' track record speaks for itself. His teams had four top five finishes in the Big East, five NCAA Tournament appearances in six seasons at Marquette, making it to the Sweet 16 twice and the Elite 8 once.

Williams is an intense and energetic coach as can be seen here:

Hilarious Buzz Williams Celebration Dance: "Walk It Out" (via ghastlytube)

But it all comes down to one question: Is Buzz Williams right for Virginia Tech?

To answer that question I think you have to realize that Virginia Tech athletics is changing. Whit Babcock has been on the job for about a month and is taking over fast. He knows what it's going to take to make the changes necessary and be successful. He went after his guy in Williams, who he thought was the best fit for the program, sold Virginia Tech and Blacksburg, and showed him the money.

Williams is an intense and established coach who recruits well and can develop and build a successful program. But he also holds high morals and values necessary to establish a confident and good character team. Moving from the Big East to the ACC will be exciting for him as a promising head coach. Next year he will be among the best in the business. With Rick Pitino and Louisville entering the ACC there will be four sure fire hall of famers in the conference with Pitino, Coach K, Roy Williams, and Jim Boeheim. I think Williams will take to the ACC well, be excited for the opportunity, and recruit and develop good basketball players.

Eventually, I believe Williams will change the face of Virginia Tech basketball.