Despite a 12-2 campaign in 2013, the Buckeyes enter their spring practices with glaring question marks on both sides of the ball.

From the "Next Man Up" File:

Leading rusher Carlos Hyde churned out 1,282 yards and 14 TD’s in 8 games after serving his suspension stemming from the infamous bar incident that occurred in late July. Who’s the next man up? According to this nifty piece by SBNation’s very own Miles Joseph over at Land Grant Holy Land,

"Sophomore Ezekiel Elliott and senior Rod Smith are probably the top two competitors to fill the void left by Hyde. Also in the mix will be a redshirt sophomore duo of Bri'onte Dunn and Warren Ball. Right now, Elliott likely holds the early edge, but Smith is very much in the mix as well."

"Senior Evan Spencer started last year, but didn't really jump off the tape and could definitely lose his starting spot to an underclassman if he's outperformed this spring. Junior wideout Corey Smith, who redshirted last year after coming to Ohio State from a junior college, is a guy many expect to breakout. Other players firmly in the mix include Georgia Tech transfer junior Jeff Greene, sophomore Michael Thomas, redshirt freshman Jalin Marshall, and true freshmen Johnnie Dixon and Curtis Samuel (listed as RB/WR hybrid). Wide Receivers Coach Zach Smith told reporters on National Signing Day that there were no starters at receiver going into spring ball."

From the "One Play Away" File:

With former backup Kenny Guiton having exhausted his eligibility, there’s also a void at backup quarterback. As of now, Ohio State doesn’t have a solidified QB2; but, the one silver lining of Miller missing spring ball is that it will provide the Buckeyes’ staff a great look at potential backup quarterback candidates. Leading the race at this early stage is FUMA alum, r-So. Cardale Jones (6-5, 250), out of Glenville H.S. in Cleveland, OH, who is unquestionably best known at this point in his career for this little gem of a tweet he floated out into cyberspace in October 2012: 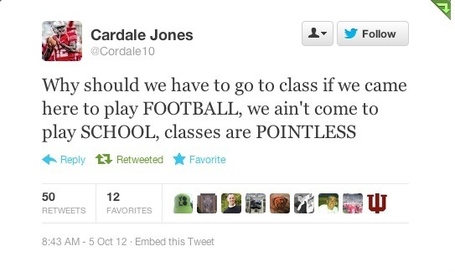 Another option would be r-Fr. J.T. Barrett (6-1, 225), out of Rider H.S. in Wichita Falls, TX. Barrett was rated the #11 player in Texas and the nation’s #3 overall dual-threat QB of 2013 by 247Sports, who also rated him as a 4* player and listed him at #100 in their "Top247". The longshot would be true freshman January enrollee Stephen Collier (6-4, 215), out of Lee County H.S. in Leesburg, GA. However, it’s pretty safe to say that with that build, the Buckeyes will likely redshirt him and have him hit the weights before he hits the field.

From the "Rebuilding or Reloading?" File:

After tackle Jack Mewhort, guards Marcus Hall and Andrew Norwell and center Corey Linsley wrapped up their collegiate careers in 2013, the Buckeyes find themselves with four current vacancies on the offensive line heading into spring ball. According to Joseph:

"Junior Taylor Decker is the only returning starter on the offensive line and will move from right to left tackle. The other four spots are up for grabs. Junior Jacoby Boren and redshirt freshman Billy Price will battle for the starting nod at center. There are tons of players in the mix for the starting spots at guard including sophomore Pat Elflein, who started the Big Ten title game in place of Marcus Hall. Elflein will probably grab one of the two. Antonio Underwood, Joel Hale, and Chase Farris (when healthy) will battle for the other. Three names come to mind for the right tackle slot: Darryl Baldwin probably holds a slight edge heading into camp, but will face stiff competition from sophomore Kyle Dodson and redshirt freshman Evan Lisle. We'll take a flier on Lisle and wager he surprises some, and might just come out of spring as the starter."

…and all of us Hokies collectively seethe at the lack of mention of the Class of 2014’s late Hokie decommit Brady Taylor in that projection.

From the "Well, I Guess Coach Cav Was Right" File:

As VT recruitniks remember, Grant, the much ballyhooed LB prospect out of Richmond’s Hermitage H.S. slammed the door on VT after he allegedly puffed himself up in the presence of his recruiter, former Hokies defensive coach Jim Cavanaugh, who also allegedly verbally knocked him down a few pegs with his response to Grant’s arrogance. Grant’s CAREER collegiate stat line to date?

The 2014 season marks Grant’s 4th and likely final year of college football. Is this the year he finally lives up to his hype? He entered spring as the Buckeyes’ starting mike linebacker, and to keep the job, all he has to do is outplay true freshman and January enrollee Raekwon McMillian (6-2, 242), out of Liberty County H.S. in Hinesville, GA. That may prove to be no easy task, as McMillian was rated the #3 player in Georgia and the nation’s #2 overall inside linebacker of 2014 by 247Sports, who also rated him as a 5* player and listed him at #28 in their "Top247".

Miller will be limited for spring ball after undergoing reportedly "minor" surgery on his throwing shoulder to repair an injury sustained in the Buckeyes’ Orange Bowl loss to Clemson. The fact that Miller will miss reps is a huge setback for the Buckeyes’ offense. Spring Ball is truly the most transformative part of the year for teams: it’s when returning players either begin to step up or fade away, and it’s where receivers and quarterbacks work on solidifying their on-field chemistry. Ohio State already has a gigantic question mark at WR; spring would provide a prime opportunity for Miller to gain trust in those potential candidates and for them to become familiar with his tendencies, ball placement, etc. Sure, they can all go out to the yard in a few weeks when Miller’s farther along in his recovery and run through the passing tree all day long, but that’s absolutely not a substitute for going at game-speed.

Largely speaking, gone are the days of routes set in stone. Rather, now teams run conversion routes, which are based on a receiver reading the coverage and basing his route’s path on what he sees. The quarterback also has to read the coverage in the same manner. In Blacksburg last season, we saw time and time again what happens when WR and QB aren’t seeing the same thing. I’m not saying LT3 was perfect by any means; however, I will say that he had far too many incompletions and interceptions attributed to him that were due to the "misreading" by one of his targets. The same very well could happen in Columbus this year if Miller and his WR’s don’t take a huge leap forward together in August.

After starting 2013 looking like a thoroughbred and finishing it looking like an old nag, Miller has major consistency questions surrounding him. His season was truly a tale of two halves:

Basically, he was terrible in the passing game after his 19/23, 4 TD performance against Purdue. He was 25% less productive through the air late in the season and, likely due to a lack of success there, was looking to run way more. He got more yardage on the ground than in early 2013, but for nearly half as many yards per attempt. Some say that Miller’s production fades when Ohio State plays a team with a pulse, and there appears to be some truth to that. The B1G was ridiculously weak and top-heavy last season, and in the season’s last 3 games, OSU squeaked out a win vs. Michigan 42-41, lost to Sparty 24-34, and lost to the #3 team from the "lowly" ACC, Clemson, in the Orange Bowl. Perhaps most notably, once seen a lock for the Heisman Trophy, Miller didn’t even earn a trip to New York for the trophy’s presentation.

Way Too Early Prediction: Looking down the road, I would reasonably expect the OSU passing game to be very inconsistent early in the season. They open the 2014 season with Navy—a very different situation on defense than Bud Foster’s LPD. This is a great matchup for VT: the strength of Foster’s defense vs. a soft spot of OSU’s offense. The Hokies have a definite advantage here.

Many OSU fans blame the Michigan State (nd therefore a trip to the Rose Bowl) and Clemson losses on the Buckeyes’ pass defense. I must admit, I would probably pile on them as well, given that they gave up 1,133 yards and 12 TD during only the last 3 games. Let’s take a closer look:

Way Too Early Prediction: Unfortunately, OSU’s defensive Achilles’ heel matches up against VT’s biggest offensive deficiency. The Buckeyes are quite stout against the run, and the Hokies’ offensive line struggled creating lanes against what was often a stacked box. Sadly, unless VT’s quarterback can be successful enough in the passing game to cause Ohio State to have to pull a man out of the box, we won’t be able to move the ball.