Tech lost their opening tournament game to Toledo. Here's a quick overview of their season and a brief discussion of the 2014 Frozen Four bracket.

It's a sad day in college hockey world. The season is coming to a close. The field of 16 has been set for Division One hockey, but before we dive into that, let's recap Tech's disappointing season in club ice hockey.

When we last checked in on the Hokies, they were getting ready for the Southeastern Regional playoffs. They faced Toledo in the opening round. After jumping to a 1-0 lead early, Toledo tied it and Tech gave up two goals in the 3rd period for a 3-1 loss. This ended the Hokies' season with a final record of 20-11-1. It really wasn't the ending we expected. At the end of November, Tech was 14-2. Something happened after Christmas break, because they only won five of their last ten games. The Hokies started having problems moving the puck, and they got sloppy on their passes. It's tough to see a team that at one point was ranked #2 spiral down so quickly. Despite the finale, the team had a good season, improving upon their 15-11-4 mark from last year. Season highlights include winning all three games against rival West Virginia, and a thrilling battle of the titans against #1 Florida Gulf Coast. We'll see if they can rebound next season after losing nine seniors, including leading scorer Alex Smith. Tech's last national tournament appearance was after the 2011-2012 season.

There has been talk amongst the most dedicated of Tech hockey fans about making ice hockey an official university sport. It won't happen, even with a new athletic director who isn't afraid to show the big bucks. Virginia Tech is a football school that used to be a basketball school, and might be a basketball school again one day soon. This isn't Massachussetts, nor is it Maine. In fact, start at our nation's capital and draw a horizontal line across the entire country. All geographic locations below that line have no business competing at the same level as regions above the line. Kids in the north grow up playing hockey in the same way that kids in the south grow up playing football. Where would our hockey fans come from to support the program monetarily? Who would we play without racking up a tremendous travel bill? That's the unfortunate reality of the situation. But that doesn't make the club team any less of a Hokie squad. For all of us, Tech is our collegiate hockey team, and we should be proud to support them. When you flip on the TV, go ahead and root for your favorite Frozen Four team, but don't forget about the guys who built a good program from scratch and keep it going year after year, all for the love of hockey.

Just because the Hokies aren't a D1 team doesn't mean we can't have some fun with the bracket this year. So for all you hockey lunatics out there, here is a printable bracket for this year's tournament (days and times included):

No, Gobbler Country is not going to offer a perfect bracket a billion dollars.

Here's how I filled out mine. Let me know in the comments who YOU picked and why: 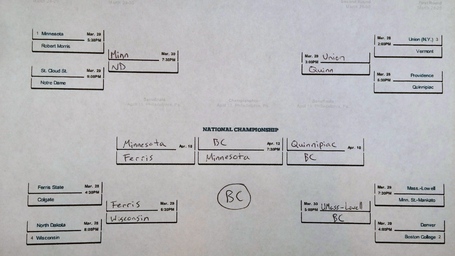 Minnesota is the #1 overall seed, but I had to go with the Eagles here. First of all, tradition: six championships, 23 Frozen Four appearances, and 33 tournament appearances. More importantly, they are the best coached team in hockey. They run an NHL caliber offense and Jerry York (who is in his 20th year of coaching) grooms these players for the big time. They even run a few plays that NHL teams struggle with. Here's some highlights from their recent game against Notre Dame:

That's all for this season folks. Until next year...