A collection of links of interest.

Share All sharing options for: Hokies Release Spring Roster And Other Spring Practice Odds and Ends

Here's  a look at a handful of odds and ends with a lot of things going on heading into spring football practice.

-As Andy Bitter of the Roanoke Times reports, there will be three open scrimmages in the weeks leading up to the Maroon-White game on April 26. It's not usually too exciting or even necessarily important, but there are far worse ways to spend an hour than in Lane Stadium watching these workouts.

-Devin Carter fell in the championship bout of the NCAA Wrestling Championships to Ohio State's Logan Stieber. Carter placed second in the nation at 141 pounds as a junior.

-New men's basketball coach Buzz Williams has been everywhere since being hired. He popped up in studio on NCAA Tournament coverage and he's made the rounds on national shows of all sorts. Here he is talking to Bill Roth for HokieSports. On a related note, I think we should all try our best to move past making "Buzz" related puns in headlines. It's too easy.

-As Mark Berman points out Virginia Tech is nearly doubling the money available to Williams to hire his assistants. He's already said he wants to hire up to seven staff members. That's more than basketball staffs in the past at Tech. 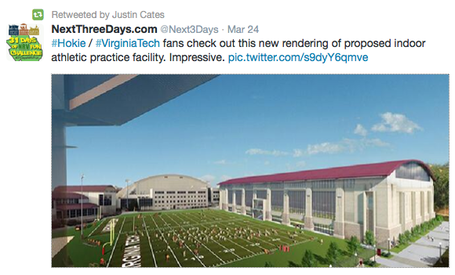 The picture above was tweeted earlier claiming to be concept art for the proposed indoor practice facility for football. This is the compromise site making minimal impact on the stadium woods and using existing practice field space. It's a fairly massive building. At one point, those large glass doors were supposed to open so you could extend the field between outside and indoors. It will be expensive but a nice and important upgrade for the department.