Masters Day One: Inside The Ropes, A Walk In The Park With Brendon de Jonge

Brendon de Jonge was up and down today mixing highlights and lowlights in his first ever round at Augusta National. The Hokie alum finished six back of the lead after shooting an opening round 74 (+2). 1Iron is back again with a detailed look at the former Hokie golfer's round.

Share All sharing options for: Masters Day One: Inside The Ropes, A Walk In The Park With Brendon de Jonge

Waking up the day of your first Masters Tournament is not as difficult as going to sleep the night before. But  Brendon de Jonge was trying to treat the day just as he would any other golf tournament. The challenge being that it IS The Masters after all! You follow your pre-tournament rituals and warm up process - nothing changes. The fact that you're really here on the same grounds that Bobby Jones and Clifford Roberts once graced has finally sunk in; replaced with mild anxiety and a minor case of nerves because it is your first Masters.  A return to the focus and mental state that allows you to compete at the highest level is on your mind. There is anticipation playing with a legend in Tom Watson and there is a comfort in playing with the animated Billy Horschel as they've played many times together. The one question us amateurs face is, "how would I handle the collar" at such an event. At this level, it's rare to mentally think mechanics, you commit to every shot so the next shot is easier - placing it within that twenty foot circle throughout the course. For Brendon, his only thoughts are to play to his strengths, by playing smart and confident, and to try and stay within himself, just take it one shot at a time.

When I saw the pin sheets for today's round, I expected to see the typical Thursday placements. However, what I didn't expect is for Competition Chairman and former US Amateur Champion, Fred Ridley to make it so difficult. When you step back and think of the philosophy of Augusta National it is quite simple - make it fair yet challenging for excellence on every shot - it's what separates the players from the champions.

Despite a rough start, Brendon remained composed throughout the early segment of his round. His approach to the first hole cleared the bunker but spun off, so much so that it traveled into the gallery where trampled grass leaves you with a "squirrelly" lie that makes it next to impossible to clip it precisely enough to get the ball up to the shelf some 30 feet above your lie and stop. A six is very difficult to swallow, let alone on the first hole at Augusta National, in your first Masters. Even for those of  who can play well, carding a double bogey on the first hole will play with your head.

From the walk between one green to the tee box on number two, you'd wonder if Brendon even registered a pulse as a +2 start didn't seem to faze him. Striping a drive that echoed through the majestic hundred-year old oak trees as if a clap of thunder struck nearby, Brendon made the 575 yard par-5 look silly. Turning the ball over ever so gently catching the slope leaving him with a manageable second shot that he carried to the green. Having to putt through the fringe grabbed his ball moreso than he thought leaving him with a 3 putt par - his opportunity for immediate redemption for the first had gone.  The par-3 fourth hole saw him make bogey and one could say his Masters jitters were now over. He was now in a full-fledged battle against a course that has eaten alive some of the best golfers the game has ever seen.

Brendon played the next thirteen holes at two-under-par with birdies at 7, 9 and 15, which is crazy seeing as the 7th hole is a real ball-buster at 450 yards to one of the smaller four par greens; it also has a wicked slope. And the 9th hole with its +100 foot elevation change from the landing are to the green. Even though you can say De Jonge gave away a shot on the 8th hole by not making birdie, Brendon picked up two on the field with those two birdies. Finishing the front at +1 is very respectable for any Masters rookie. A blocked tee shot on the 11th hole forced him to play safe, take his 5 and move on. And move on he did, entering and exiting Amen Corner without a scratch. At 13, he lands it on the green in two taking advantage of his length. But as so many first-timer's balls find their way into Rae's Creek, so did Brendon's. His short-game savvy saved him though as he got up and down for par. The energy in making that par save reversed what may have been a halt to his momentum, instead catapulting him to par on 14 and an easy birdie 4 on 15. 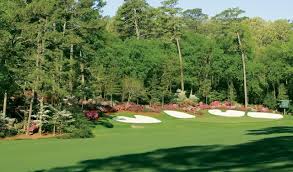 Luck has a way of smiling and frowning on you throughout every round at Augusta. De Jonge hit another cannon shot of a drive on 18 up the right side long enough to avoid most of the field, however Brendon's ball found a fully-sanded divot. Any of us would be irritated at that misfortune, yet BDJ took it in stride.  He trapped a 6-iron and could only hope the sand splash didn't take too much off the ball, and was at its mercy once it took flight. The ball didn't listen and ended up in the right hand bunker, one of two he found on the day.  His bunker shot came to rest nine feet from the flag and on one of the more grainy spots of this hallmark final golf hole. Unfortunately, his 28th putt of the day burns the edge and didn't fall.

His final stats on the day saw him hitting 12 of 14 fairways, with his usual consistency. Though the fact that he hit 10 of 18 greens in regulation shows how difficult the track is under pressure. Save for a couple swings he played extremely well, but that's why you play 18 holes.  Birdies on 7, 9 and 15 helped Brendon fulfill a lifelong dream to play at Augusta in the Masters. And like any professional worth his salt, making par on 18 would make dinner easier to swallow, but it was not a bad day for this Hokie's first walk in the park!

Friday's pairing has Brendon teeing off at 12:09 pm. Once again with Watson and Horschel. Check back for 1Iron's report once again as Brendon attempts to make the cut and play on!