A furious finish from former Hokie golfer Brenden de Jonge pushes him below the cut and creates possibilities only previously imagined. In making birdie on four of his final five holes, de Jonge pulled even for the day

So it was on to Day Two, where the tee times are flipped in order to even out the perceived differences in weather, course traffic and karma to make it "fair" for everyone. I don't know about you, but when I have a so-so round, I'd rather sleep in as late as I can, wake up to a Venti Skinny Caramel Macchiatto and some greasy meat, cheese and egg concoction before heading to the gym. In Brendon's case, he's likely doing something similar as he's pretty serious about his health these days working with the fitness team at Sea Island. The days of us old codgers enjoying adult beverages and telling lies until the wee hours of the morning with the King, Finsterwald and Gardner have been replaced with Muscle Milk, Pilates and coaching sessions with Bob Rotella. It's a new day, a new age where the PGA Tour is more science than art turning out robotic souls mixed in with some spicy personalities like Ben Crane of the You Tube "Golf Boys" fame, Boo Weekly and the 2012 Masters Champion from Bagdad, Florida Bubba Watson - seriously, they're so white, they're CLEAR! I guarantee Clifford Roberts rolled over in his grave at the thought of a "Bubba" winning the coveted Green Jacket. (Ed. Note: Hunter Mahan is reportedly planning his second career as a European rockstar as negotiations have him touring with Fiver Finger Death Punch later this summer.) 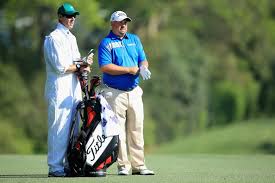 Brendon's second round began shakily. However making par on #1 felt good after yesterday's bookend bogeys (a double on the first before ending his day with a bogey on the 18th). Bogeys at holes 3 and 4 undoubtedly had him occasionally glancing at the Leaderboard with the cut looming at +4;  the players who will continue on over the weekend will be comprised of the low 50 players and anyone within 10 shots of the lead.

Traditionally, day two at The Masters tends to be the real moving day as players jockey for position to take advantage of benign pin placements and the delicate balance of risk to reward. The nonexistent wind from Thursday had not carried over to today with gentle swirling breezes from the west and southwest making the middle six holes on through Amen Corner very challenging. A number of the age old Loblolly pines are missing many branches which is creating breezes nobody has felt before.  Unfortunately, Brendon's putter is not producing the results he would like thus far, even though he's not putting poorly the ball is just not dropping for him.

His game plan for today was to smartly take advantage of opportunities that present themselves in order to pick up four to five birdies and get into red figures. The driver continues to find the center cut or positioned on the correct side of the immaculately manicured fairways. However, the grain of these tightly mowed lawns at Augusta National have been cut back towards the tee minimizing the run out most tee shots receive. The pin placements continue to be a mix of Sunday locations and never before seen locations by patrons or on TV yet familiar to the Membership creating unique strategies before each tee shot. The pace of play today has been quite a bit slower with each player taking more time on critical approach shots. Especially on key holes where the field is sporting such a large contingent of Masters rookies.  Bubba Watson has gained some serious momentum birdieing 5 holes in a row on the back nine in taking the lead at -7. Fan favorite, Freddy Couples has slowly worked his way into contention up the leaderboard into second, finishing the front nine at -3.  Brendon grabbed a bit of breathing room with two solid shots into eight with a two putt birdie on the welcoming par five. Playing partner, Billy Horschel did the same and unfortunately gave it back making bogey on nine.

His back nine began in nondescript fashion,staying  true to the plan he designed to get through the two toughest holes on the return nine. Entering Amen Corner, he needed to pick up some momentum with birdies, but it didn't come to be, as he made bogey on 12 and par on 13. Finally - A fist pump on 14 with a birdie three from an excellent iron played into this precarious pin placement gave de Jonge a much needed lift. He leapfrogged 18 players into T38 as he headed  into the traditional TV holes. There was an opportunity to put a number on the board with birdie opportunities on each of the remaining holes today, yet it seemed likely he would continue his conservative play ensuring that he made the cut. Remember, THAT was goal #1 for this week!

His tee shot off 15 turned over slightly, leaving him with a 6-iron into the green. He caught it a bit thin, and the ball landed pin high and just left of the pin off of a crown about 15 feet away; and slowly trickled into the pond guarding the front of the green here. Needing an up and down to save par, he walked dejectedly across the Sarazen Bridge. This is where we need a 'LET'S GO...HOKIES" cheer from the patrons to bring back that affable smile from our boy, but he left 15 with a double bogey 7. He could have mailed it in from here, but with encouragement from fellow countrymen and 1986 Master's Champion Nick Price cheering him on, he pulled up his boot straps in true Lunchpail Hokie fashion and marched onward.

Horschel's tee shot on the 176-yard 16th came up way short some 45 feet away. Watson dumped his into the water, leaving Brendon just shaking his head at a loss as to what club to pull.He stood over his Pro V1X with 7 iron and gust of wind catches his well struck shot landing on the back edge of the green and carries just over the edge into the fringe. A slick downhill 24 footer awaits the 33-year old rookie, and standing over his chip, oh Lord!  He's trucked this! HIT THE STICK! BOOYAH Birdie as it rattles the stick and drops in for a deuce, and most importantly got him back under the cut line!

A huge sigh of relief is exhaled as he made the walk to the 17th tee appearing calm yet obviously brimming with confidence. The 65 foot Eisenhower Tree was no more, and one less obstacle to making the weekend. The cut had been set at +4 with 54 players at that score or better.  As long as Brendon could play at level par for 8 more golf swings, HokieNation could continue on all weekend long at ANGC. The sun shone on the Harare, Zimbabwe native as he hits another solid 285 yard drive and a stock 8-iron into the 11th most difficult hole on the course, one putt, birdie - big high five, big chest bump!

Back-to-back birdies, and things were clicking for Brendon. It was time to capitalize on the momentum he had built moving onto the final hole with a one shot cushion (below the cut) to play two more days in his debut Masters. With a huge weight lifted off of his shoulders, he stood over a routine six footer for one final birdie at 18, straight but downhill.  A putt he's practiced all his life, and seen a million times (or thereabouts). Center Cut Zimbabwe Beef, the finest kind! Another birdie! And he had made the weekend with an even par round while birdieing 4 of the last 5 holes, and maintaining +2 overall nine shots back of the leader Bubba Watson. Congratulations to Brenden de Jonge for hanging in and winning the initial battle of attrition, and hopefully his game will come free and easy to him the rest of the way. We've seen big leads get frittered away in the Sunday shadows of Augusta, sometimes magic takes hold,  and just being able to play the final 36 holes will prove invaluable to Brenden de Jonge as he hopes to make many a return trip. We'll be back tomorrow with more on Brendon de Jonge's run at Masters immortality.