Masters Sunday For Brendon de Jonge: Wrapping Up The Experience Of A Lifetime

Brenden de Jonge almost shot under par for first time in his four days at Augusta National, but bogeys on 16 and 17 derailed him, as he finished +1 on the day, carding a 73. A relatively quiet first trip to be proud of, he placed 37th in the field at +7 for the weekend.

Share All sharing options for: Masters Sunday For Brendon de Jonge: Wrapping Up The Experience Of A Lifetime

Every little boy who has ever held his Daddy's clubs dreams of one day standing on the first tee at Augusta National on a bright spring day. Perhaps he's poised to crack a drive deep down the center of the fairway or maybe he then fantasizes about standing over a four-foot putt on Sunday with the sun setting over the scoreboard to win his first green jacket. 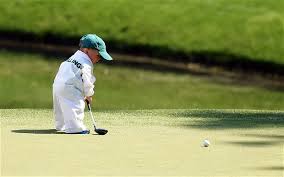 Brendon has accomplished the first half of that dream now, and can only wait until next year for another chance at  glory. The dream of slipping a Green Jacket over those broad shoulders must now take a back seat to the rest of the PGA schedule that awaits. Every year for as far as I can remember, most  Masters Tournaments feature a Saturday or Sunday when the leader back tracks towards the field and this year is no different, "Better to have this round [Saturday] than on Thursday or Friday or he wouldn't be here for Sunday," said VT Golf Coach Jay Hardwick. "Other than a poor tee shot on 17 that found the pine needles left and the bad break on 7, there just weren't any bad shots. But that's how this game goes sometimes. It just didn't click today."

Taking it all in stride on the surface and continually grinding on the inside to hit the next pure shot. To stroke a breathless putt that has been visualized for countless years on end and hearing it bounce inside the cup to the deafening roar of the crowd is the serendipity all of us live for out here. The money's great, no doubt, but it's the Championships that live forever.  The dangling carrot  for Brendon's round today was to somehow find a way to get inside the top 12 - which was even par - that would ensure a return visit next year via exemption. With an additional 25 players shared the same mindset playing the tournament within the tournament from +1 to +6, it was still one shot at a time. 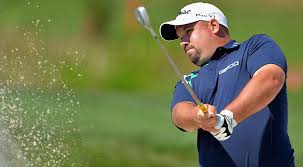 He teed off with Oliver Goss, the Australian and University of Tennessee sophmore, last year's US Amateur runner-up. Goss will experience the Butler Cabin ritual earning the Silver Trophy as the low amateur. The other 20-year old, Justin Speith, in the field found himself in the final group. Pretty heady stuff for anyone in their first Masters.

The first five holes at Augusta National proved to be the undoing of an otherwise excellent showing for de Jonge at his first Masters Tournament. Playing these holes at +6 for the week is the difference between his +7 and a top 20 finish. Today's trip had him card a 2-over par through his nemeses 5th hole before settling down with par on the delicate par-3 sixth hole. He played the next 10 holes in 3-under par with birdies on 7, 13, and 14 which gave him tremendous confidence and a glimmer of hope going into the final five holes that a sub 70 round was within reach, before eventually losing his grip on his -1 with the two late bogies.

His ball striking improved throughout the final round finishing ahead of the field in every category - 59% GIR, 79% of fairways hit and 1.62 putts per hole. There's no one element of the week's performance that can be pointed to where Brendon can take away and say, "yes, this is what I have to work on." It boils down to repetitions and familiarity with the course, both difficult to obtain.

By not having the competitive reps at Augusta, expectations are difficult to formulate. His game can certainly handle the load, but the polish and shot-making required are often learned traits, unless you're considered a pantheon golfer like Woods or Nicklaus. Having to maintain such a heightened sense of emotional preparedness and successfully execute on the grandest stage of all is an incredible mental drain. One could say the crisp 6 iron on 15 that came to rest just over the green or the missed par putt on 16 left de Jonge scratching his head a bit frustrated at the result with bogeys on 16 and 17 taking away that sub par opportunity. Yet true to the Lunchpail mentality of Virginia Tech and the hero of Zimbabwe golfing youth, Brendon de Jonge held his head high walking up the 18th fairway finishing with a par 4 at his first Masters - our Blue Collar Guy in a White Collar Sport!