2014 Maroon-White Game, or Springtime on The Blue Ridge

An attempt to relay a bit of the fan experience from Virginia Tech's 2014 spring football game.

Share All sharing options for: 2014 Maroon-White Game, or Springtime on The Blue Ridge

Spring football is a wonderful thing. There's no better way to bridge the gap between the bleak doldrums of winter and the boundless optimism of late summer and fall.

Driving south from upstate New York meant I was advancing a full season ahead leaving behind a lingering late winter to see spring blossoms lining the roadside.

I met up with a friend in Roanoke Friday at his apartment a few blocks away from the Roanoke Times and the Virginia Transportation Museum. Truthfully, I've never wandered around the Star City and I was impressed with the architecture and the active nature of the place. 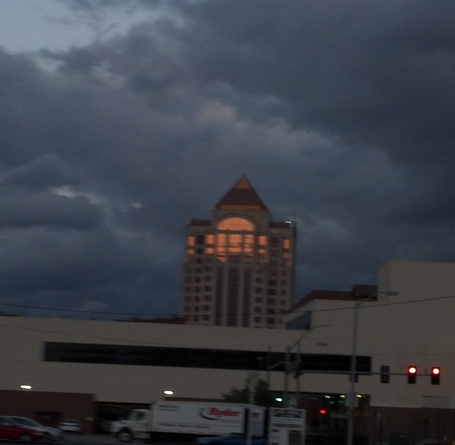 There were  a number of cool events going on in Roanoke, but we laid low Friday evening. The weekend was about football.

Saturday we got a particularly late start and rolled into town around 11 a.m.

The first thing most noticeable to anyone that's been away from Blacksburg for more than a few weeks is how much it changes. There are loads of new structures popping up all over town and campus alike.

We noticed one apartment complex behind a house we occupied for some time on Tom's Creek Road that had been completely demolished and built larger and nicer. Quite impressive.

We met up with some of my Gobbler Country associates and had a very productive morning and early afternoon at our tailgate near Litton-Reeves.

We had some good food and a number of helpings of adult beverages. The weather was outstanding and thousands of Hokies took part in the festivities. 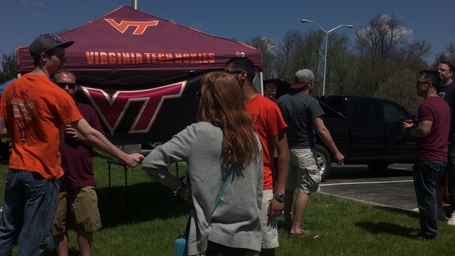 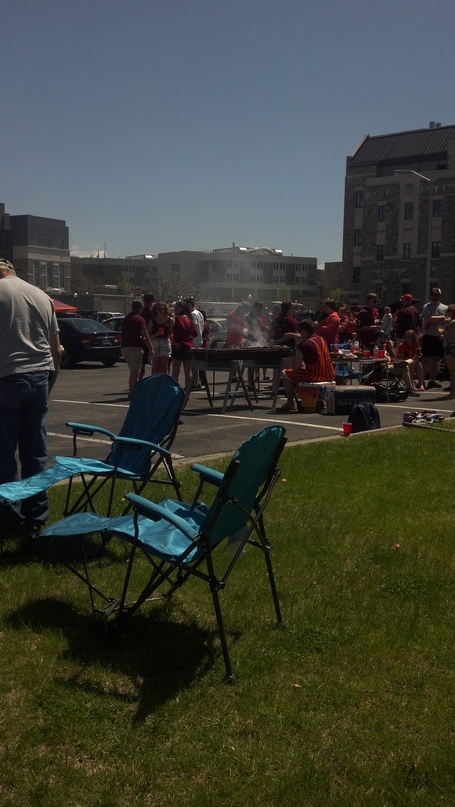 Footballs were tossed which left me predictably sore the next day. Despite taking proper precautions by obtaining new sunscreen, I found myself quickly burned. My thick blood and fair New York "winter skin" were no match for the late April majesty of southwest Virginia.

By the time my group of people were inside the gates we heard a loud noise and from behind the North End Zone stands it was clear that Joel Caleb had scored in some fashion. We'd managed to miss the most significant play of the spring game.

But that's the thing, it's not a big deal. The spring game is primarily a social function. It's a way for fans to shake off the cloak of winter and get back outside. It's laid back and fun and as far as the football goes, you can only learn so much about the team this early.

A Handful of key players aren't healthy or in some cases even on campus yet so it's foolish to make too much of anything. The defense looks good and it will always be ahead of the offense, even with veterans at quarterback. All in all the spring game is a nice recruiting tool (at least one player committed from the weekend visit) and provides exposure to fans and recruits alike. 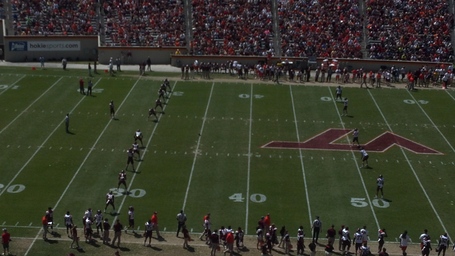 Replays of the game can be found playing on various ESPN platforms as we return to the spring lull in college sports.

The only attendance estimate I saw was from a local television station stating there were between 33,000 and 35,000 people at the Maroon-White game. That seems about right and it's a slight upturn from the year previous I believe.

It was a nice day for everyone sunburns not withstanding. The game itself is secondary. The fun and sun are paramount in spring and hopefully the good vibes last until fall practice. That's when we'll finally start to get a sense about the 2014-15 Hokies.

Until then, relax and enjoy springtime on the Blue Ridge and everywhere else.