Rockbridge County (Lexington, VA) Offensive Lineman Austin Clark looks to narrow his list of favorites by the end of the month

When the topic of offensive line comes up, it's kind of a sore subject with the Hokie faithful. And if you follow Tech recruiting, it's not going to be any more pleasant either. Head Coach Frank Beamer doesn't need anyone to remind him of the importance the next few O-Line classes will be for the success (or failure) of his impending close to a hall of fame coaching career.

Four-Star offensive lineman Austin Clark (Rockbridge County) hails from Lexington, Virginia which is about 80 miles north up I-81 from Blacksburg. Great! We got him! One would think the Hokies would have a clear leg up in the race for Clark's signature, but with offers from some of the top schools in the B1G, SEC and ACC someone will have to standout out and make a huge impression early and often.

Some blue chip recruits like to take their time and "feel the love" from coaches and fans alike. In Clark's case he wants to narrow his list  of schools down by the end of this month, focusing on six or seven schools over the spring and summer to make a decision before the start of his senior year.

HOW DO THE HOKIES STACK UP?

According to the recruiting pundits at 247Sports, the Tennessee Volunteers appear to have the lead over the Hokies. It would be a shame to have a hometown talent like Clark lining up against VT in the "Battle at Bristol" in 2016, especially when the Volunteers beat out Tech for 2014 O-Line recruit Coleman Thomas (Fort Chiswell, VA).

Boasting 15 offers from the likes of Ohio State, Penn State, Miami, South Carolina and Clemson to name a few, Clark was one of the top five outstanding offensive line performers at the recent Nike Football Training Camp held in Charlotte, NC. Clark spoke to SB Nation Recruiting after his great performance and thoughts on past and upcoming visits in the next few months.

Take a few moments and check out Austin Clark's highlights from his Junior year. This young man is worthy of the praise and accolades he is receiving. 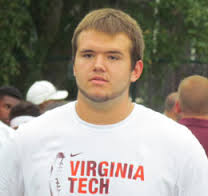 The Hokies enter the 2014 season with 17 scholarship o-linemen, six of which are seniors. Eight of them are currently red shirt freshman or incoming true freshman. It's fairly easy to do that math, and the Tech coaches will need to bring in another four to five quality linemen to replenish the losses.

Losing a border battle for a top flight recruit in the Hokies own backyard to a program that you have outperformed in the past decade and most recently thumping in the 2009 Chic-Fil-A bowl 37-14 would be crushing. And this isn't even the in the 757! Coach Beamer and new O-Line Coach Stacey Searels need to dig in and get Clark to stay close to home and maul for the Hokies, especially when he's right up the street. 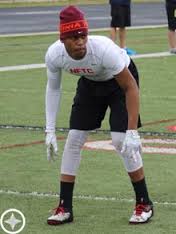 At defensive back, Greensboro (N.C.) Northern Guilford cornerback Mook Reynolds was late to the event and showed up decked out in Virginia Tech gear, but when he got onto the field, the Hokie commit consistently made plays on the football in the 7-on-7 portion, showing his ability to find and track the football. 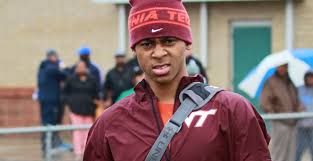