If there were ever a situation for Logan Thomas to succeed at Quarterback in the NFL, it might just have fallen into his lap this afternoon as the Arizona Cardinals stepped up and made Thomas the sixth quarterback selected in the draft this year when they selected him with the 20th pick of the 4th round.

As can be expected, the Twitterverse hasn't exploded much with fan reaction, as it's still early out west, and mostly because there aren't as many Cards fans out there as some other franchises. Largely what's been coming back are dubious tweets like these, from known NFL writers and ex-NFL executives.

Can’t remember last time a quarterback as inaccurate as Logan Thomas succeeded as a pro QB.

Barnwell is ESPN/Grantland's statistical guru. He has likely run the numbers on such things.

Bill Polian: There is nothing I saw on tape that led me to believe Logan Thomas (Arizona) has a chance to be a very good QB.

Then you weren't watching the tape Mr. Polian. Logan does a lot of things well, he just does some things very poorly that he hasn't been able to make progress on. And he's been given ample time to fix them. Bill Polian is well-respected, and I think he's underselling Logan, even though I myself am dubious about his long-term prospects at the position.

Bruce Arians, though, is a Hokie through and through, having played for the Hokies as the starting quarterback in our wishbone offense; and the he began his coaching career as a graduate assistant way back in 1975. He likes a lot of what he sees in Logan, and he gets on well with Beamer and trusts the quality of the products VT turns out. In Logan he can see the arm, the physicality, the presumptive durability, and the calm demeanor. All necessary tools he'll need to have considering Logan could be faced at some point with NFC powers Seattle and San Francisco. And meanwhile the Rams are putting together a ridiculous defensive line with Robert Quinn, Aaron Donald, and Chris Long.

Logan enters a situation with an aging starter who has had trouble staying in the lineup over the years in Carson Palmer. The backup is former Michigan St standout Drew Stanton. Stanton is eons ahead of Thomas in his grasp on the NFL schemes and packages, and while his arm and feet can't compare to Logan, he will make the intermediate throws with precision.

If something happens to Palmer, Stanton would get the first nod, but if he faltered Logan might not be as far off from at least getting an opportunity to play as it might appear since he enters camp as the number three. Additionally with Arians connections to VT, and having made a connection at the VT Pro Day we can see that Arians will have a personal investment in working with Logan to succeed. 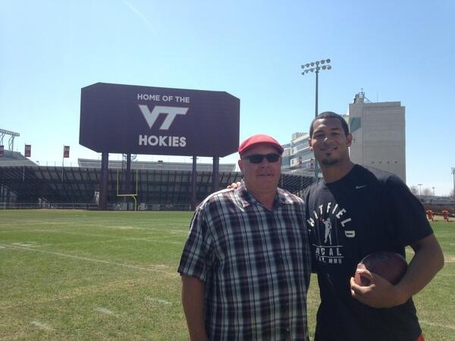 So If Logan Is Pushed Into Action This Year, How Does Arizona's Offense Look?

First off, nobody should expect to see Logan this year. And he is well aware of that:

"I know what pretty much every other quarterback who comes into the league knows: There's going to be that learning curve. And sometimes it takes a couple of years, so I understand," Thomas told the Roanoke Times before the draft.

The Cardinals were 10-6 last year, narrowly missing the playoffs in a stacked NFC West division that saw it's top two teams make the NFC title game. The Cards boasted the number one rushing defense in the league, and finished 6th overall. The offense however sputtered regularly early in the season and finished 17th overall in the league despite Carson Palmer being available for every game. The team finished with a lot of momentum, winning 7 of their final 9 games.

If Logan were fortunate enough to play this season, his number one target would undeniably be Larry Fitzgerald, our old nemesis from Pitt. Simply devastating, he would definitely be a candidate to go get some of Logan's deep balls. The Daunte Culpepper to Randy Moss connection comes to mind.

The Cardinals spent most of the off-season upgrading their defense, but did sign career underachiever (to date) Tedd Ginn to help. With Michael Floyd a nice third receiver, the corps appears to be a little thin with Andre Roberts defecting to the Washington Redskins. The Cardinals selected a smaller WR from a Division Two program in John Brown, who Mike Mayock described as explosive. For the Cardinals sake the hope is that one of those WRs, preferably Ginn, step up and take some pressure of of Fitzgerald.

This is because the Cardinals running game was a woeful 23rd last year splitting carries between the tapped out Rashad Mendenhall and rookie Andre Ellington (Clemson). Ellington could maybe be the guy, but Hokie fans are still waiting for Ryan Williams to be injury-free and in shape. He was a healthy scratch for the entire year. The offensive line lost long-time OT Levi Brown in a mid-season trade to the Steelers, and the team hasn't found an adequate replacement, and the entire OL looks to be a bit of a mess at this point. However, the Cardinals haven't drafted any big guys yet. When I reviewed the offseason needs it was Offensive Tackle, Outside Linebacker, an heir to Palmer, and a big target TE to replace the likely departed Rob Housler.

So Have The Cards Addressed Their Holes?

Instead of buttressing the OL the Cards have shored up the secondary by taking a SS in the first round to offset the Honey Badger, Tyronn Mathieu's ACL/MCL tear that will have him out until late in the season if he returns at all. They got their big target TE, but he's not really the pass catcher they were looking for at the spot. Again, Logan is there, and potentially of use, especially if all he's doing is running the scout team!

They took a nice DE out of UNC, and the speed WR Brown, but that OT spot is still a concern. So if they don't address that, the way that Carson Palmer stands statue at times might lead to him getting knocked out of a game and causing some upward mobility on the QB depth chart.

I'll be eager to hear what Arians plans are for Logan this year. Whether he gets relegated to running the scout team and the practice squad or whether he challenges Stanton for the backup job, or even gets activated to play a little tight end, similar to how it was when he played some in red zone situations at VT as a Freshman. He is a big target on fade routes, and would give Arizona two options with Fitzgerald excelling in such situations as well.

Honestly when I think of Logan getting a fair shot at Quarterback in a low-stress situation, this couldn't be better for him. I wish Logan the best of luck at whatever course he chooses, and I hope that his gifts can shine through in his play, and the he gets his opportunity as soon as possible. Congratulations Logan!