There are many revenue streams for the Virginia Tech athletic department. Here are the numbers for the 2012-13 fiscal year.

The 2012-13 College Sports year ended almost a year ago, but accountants being what they are it takes awhile for the numbers to finally be made public. At last, we have those numbers, which we are happy to share with you fans here! Today we will look at revenues; we will put together an article analyzing expenses a little later.

Here's how Virginia Tech compares as far as total revenue from all sources:

At first you might be alarmed to see such a big gap between the Big Ten, SEC and Big XII averages and what VT reported last year. Don't be alarmed. Tech started out way, way behind teams like Ohio State, Alabama and Texas, but the Hokies have been gaining on the "big boys" slowly but surely over the years. The fact that Tech is above average in the ACC and within striking distance of the Pac-12 says a lot about how far Hokie sports have come. Yet there is certainly room for improvement. Where, you ask? Let's dig deeper...

This is the one that gets the more attention on the internet, and yes, it's true, SEC and Big XII teams did get more money from their conferences than Va Tech got from the ACC last year (though W Virginia did not get more - they are still receiving a partial share). The good news? The ACC did pay out more than the Pac-12, and all P5 conferences are actually pretty close (though the Big Ten is starting to pull away just a little bit) 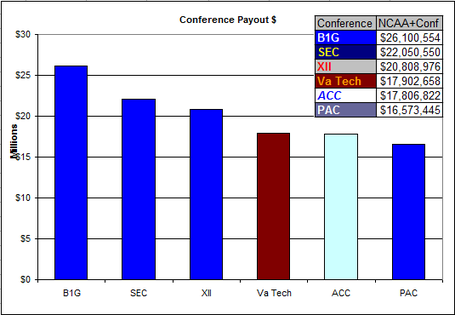 To be honest, I wouldn't worry too much about conference payouts - it's not going to make or break the VT athletic department either way.

But there are bigger fish to fry, as they say...

Schools make as much money from ticket sales as they do from TV, if not more. In fact, the really big teams with big alumni bases and big stadiums make the most money - both in total and in ticket sales. Tech does well relative to the ACC conference average, but there is a huge gap between teams like, say, Texas or Oklahoma, and a team like Va Tech. 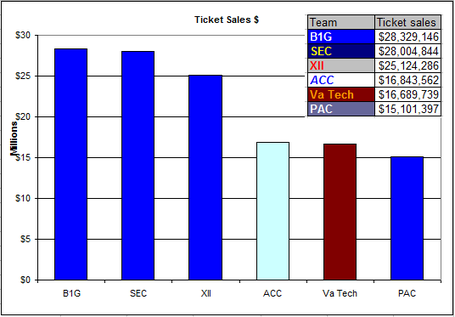 The best way (IMO) to improve ticket sales is to improve a) the quality of the opposition, and b) the quality of the home team. Hopefully the coaches are going to achieve part b on their own, which leaves the new athletic director to fix part a. One thing we can be pretty sure would help ticket sales for football would be to play Florida State and Clemson more often. One way to do that would be to switch to a scheduling model of 3 permanent rivals* and 5 rotating teams. Under that model, the Hokies would like host either the Seminoles or the Tigers every other year, while still facing the 3 most important Coastal Division rivals, in theory

* there are a lot of opinions as to which 3 teams the Hokies should have as permanent rivals if the ACC does in fact adopt this model. For my 2 cents, I'd like to see Virginia, Miami, and either Louisville or Pittsburgh (knowing that Tech would play at least 1 game in the state of NC every year anyway due to the 5 rotating games).

Contributions made directly to the athletic department are related to ticket sales in 2 main ways: a) sometimes you have to make a donation in order to buy a ticket, and b) both numbers are a function of the size and interest-level of the fan base. 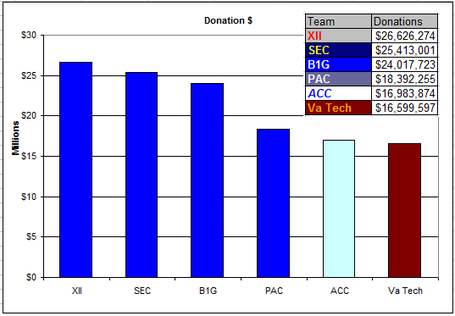 Virginia Tech trails the ACC average slightly when it comes to athletic donations. This may be due to the fact that the Hokies have not played "big time" college sports as long as some of the other teams. I fully expect this number to increase over time.

Despite allegations to the contrary, ACC teams do have some school-owned media rights which are marketable, as the numbers below indicate. In fact, Virginia Tech reported well over $4 million in revenue from so-called 3rd Tier (and other) media rights last year.

I find it a little humorous that Va Tech received more in school-owned media rights income than the average Big XII team...

Somewhat related to media rights are licensing fee revenues. Different schools report this data in different ways, but it usually includes as a minimum things like royalties from apparel bearing the team logo, etc.

There are other income sources reported like student activity fees, money paid directly to the coaches, etc., but those are not all that interesting to the average fan, nor are they typically significant in the big picture.

The Hokies are doing fine when it comes to revenue. There are certainly areas where the athletic department could bring in more money (e.g. ticket and apparel sales), but for now Tech falls pretty much in the middle of the ACC.

To see financial data from the other ACC teams, click here.