Starting 2017, Virginia Tech Football Will Play Eight Conference Games And Must Play One Other Power Conference Team As Well

Share All sharing options for: Starting 2017, Virginia Tech Football Will Play Eight Conference Games And Must Play One Other Power Conference Team As Well

BREAKING: ACC remaining at 8 game schedule, but must play another power league game starting in 2017, per John Swofford

This follows suit with the SEC plan that is going into action.

BTW, Notre Dame will count toward that requirement

Asked Swofford about whether BYU would count. He said that didn’t come up, but they’d be discussed along w/ Army and Navy.

BYU should count, but I'm on the fence with the other two service academies.

So Who Do The Future Schedules Have In Store For The Hokies? Any Holes To Fill?

2017:  There is definitely a hole to fill here. The Hokies have home games against Delaware and Old Dominion but go on the road to East Carolina.

2018: Again a hole to fill. VT hosts William and Mary and ECU, but visit ODU.

2019: The power conference opponent VT visits is Wisconsin. with home games against Charlotte and ODU and another road tilt against ECU.

2020: VT is an honorary member of the Big (?) with a home game vs Wisconsin, and a road game at the "Big House" in Ann Arbor, Michigan. Home games against Liberty and one more more game in the interminable James Weaver Classic series with ECU rounds out the schedule.

2021: Michigan visits in the return game of the home-and-home. West Virginia also makes it's first appearance on a VT schedule since Marcus Vick told their fans in Morgantown what we were all feeling: 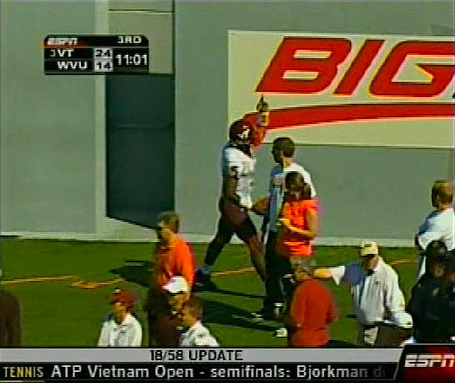 2022: Features a visit from Penn St and a home game against West Virginia. There is space though with just one game at ODU scheduled.

2023: Purdue and a visit to Happy Valley more than meet the requirements. ODU is once again an opponent.

There are no Power5 Conference opponents beyond 2023, though the ACC opponents are scheduled through 2024.

The ACC meetings have begun in Ponte Vedra, FL. We'll be back with more updates as they come. Have a great week!