Is this physically gifted freak basketball's "Next Big Thing?"

Ever wondered what a 7'1" version of Kevin Durant would look like? Throw in a mix of Kevin Garnett and we just may have basketball's Next Big Thing.

Say what? You mean a big man who has a handle like a guard, a fluid shooting stroke with three point range, post moves, shot blocking and rebounding ability who can run the court and also dish the rock...This combination of size, speed, agility and overall skill set is unheard of.

For those Hokie fans who hibernated the last two winters while our hoops program plummeted to the depths, wake up and meet seventeen year old Thon Maker. Rated a consensus five-star prospect and the #1 player for the class of 2016 according to ESPN, the uber talented Maker is well on his way to becoming a big time star.

And the best part is, the rising junior is currently attending high school in Martinsville, VA for the Carlisle School.  PAGING COACH BUZZ WILLIAMS...COACH WILLIAMS.

Check out this quick highlight reel from this past season so you can get an idea of the type of talent this young man possesses:

WHO IS THIS GUY AND WHERE DID HE COME FROM?!?

An Australian citizen, Maker was born in the southern part of Sudan before his family immigrated "Down Under" when he was 7 years old. The opportunity for a greater education and to escape the internal strife occurring in the Sudan were the primary reasons for his family's change of scenery.

Like many youths growing up in most other parts of the world, Maker played soccer. In fact, if it were up to him he'd still being playing on some grassy pitch in his attempts at Futbol glory. That all stopped when he continued to grow, eventually becoming too tall for the sport. As fate would have it, his next opportunity was just around the corner.

Discovered during an outreach program centered around soccer and basketball for Sudanese youth in Australia, Maker and his family became acquainted with Washington DC native Edward Smith. Smith served as a program coach and mentor, suggested Maker take his exceptional athletic ability and size  to the United States. The plan was simple: develop and enhance his game by playing against the best competition in the world.

MAKER'S MARK ON THE USA

Maker's first stop was in Metairie, LA playing his freshman year for Metairie Park Country Day School. The following year, he transferred to the Carlisle School in Martinsville, VA.

In addition to his individual success, Maker led Carlisle to the Virginia Independent School Athletic Association Division II state title, where he put up 26 points, 18 rebounds and five blocks in a win over Christchurch School.

Check out Maker's highlights in the state title game versus Christchurch and their exceptionally talented big man Devin Robinson who is bound for the University of Florida under the tutelage of Head Coach Billy Donovan:

HOW REAL IS THE HYPE?

Maker has not gone unnoticed by the serious basketball heads and recruiting pundits since his 8th grade year, as seen in this footage from 2011 when he was only 14 years old:

Dwight Howard is impressed (see at 0:39 mark) at the Adidas Nations Camp in the summer of 2012:

The best player in the world has also taken notice of this young talent: 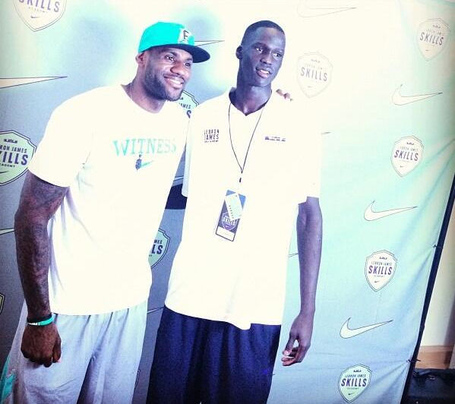 Wanna know who got next?! 16 year old Thon Maker from the Sudan. Heard it here first. #HShoops

Even our very own Logan Thomas chimed:

"@BballProblemz: 7'0" Sophomore, Thon Maker, is the whole package! The next Kevin Durant?! @coachdalton23

The hype is definitely real, fair or not. The comparison's to Kevin Durant are made daily and it's only going to continue and expectations are going to become higher than ever. Check out this great article from SB Nation's Ricky O'Donnell and his take on the overwhelming ceiling place on Maker:  Thon Maker: Hype or Hope?

When Maker is not playing for his high school, he continues to work on his game in the AAU circuit. Last year, Maker played for renowned AAU power Boo Williams of the Nike EYBL league. Since then, he has switched and is now with another VA powerhouse program in "Team Loaded."

Loaded, is one of the largest and most successful AAU organizations in America and participates in the Adidas sponsored "Uprising/Gauntlet" tours matching up some of the best players in the nation. In 2013, they produced more scholarship players than any AAU program in the country.

Maker continues to dominate and improve his game. He definitely needs to continue to get stronger and put on some pounds, but we have to remind ourselves he's still a kid! His potential seems limitless.

WHAT TYPE OF PERSON IS HE OFF THE COURT?

From everything I've read, videos - interviews watched and what people have written about him, Maker comes off as a humble, hard working, polite and shy teenager. Think for a second about the journey this young man has been on in his short life. Most of us barely leave our respective states growing up, let alone live on THREE different continents by the age of thirteen.

Maker excels in the classroom, maintaining a stellar 4.0 GPA. He volunteers locally as a youth mentor and helps in fundraising efforts to benefit muscular dystrophy research. He has also donated his time to area beautification projects. A quality young man no doubt, who is well spoken and fully seems to understand the tremendous opportunity he has been given and the exceptional talents and physical gifts he has been blessed with.

Any program will be lucky to have him, which leads us to...

WHICH SCHOOL HAS MADE THE BEST IMPRESSION ON HIM SO FAR?

Naturally, all of the major programs will be on Maker until he makes his decision. He doesn't seem to be in a rush, after all he just finished up his sophomore year of high school so a decision is probably not coming any time soon. He has though, started to take visits and a few schools have seemed to jump out of the gate early on:

And of course the Duke is in it (Thanks for the blurry pic, Dukies):

DO THE HOKIES HAVE A PRAYER IN GETTING MAKER'S ATTENTION?

Hokies Head Coach Buzz Williams is touted for being a quality recruiter. We've already gotten a glimpse of this with the signing of four star SG Ahmed Hill and three star C in 7'0" Satchel Pierce. Add that to the roster overhaul and you can see Williams is looking to bring in top notch recruits while clearing out the marginal players.

I'm certain coach Williams and staff will do everything in their power and put in maximum effort in trying to build a relationship with the Maker family, his coaches and other mentors. It still may be a long shot in the end, but you never know until you try. Maker being located in Martinsville is a big plus as it is only 70 some miles away from Blacksburg. I think the staff needs to pitch a tent in his front yard, show this young man how much he would really mean to a program looking for an identity and to elevate them to that next level.

Even more reason to build a strong relationship at the Carlisle School is that Thon's younger brother (by a year) Matur Maker is waiting in the wings. Yes, you read correctly! There is another! Matur is 6'10" with the same frame as Thon, but seems to play his size and position as a "big man" more than his brother does:

Coach Williams has a plan to take VT hoops to heights it's never been to before, shocking the college basketball landscape and keeping Thon Maker in-state would be a program changing event.