Virginia Tech In The Mix For 2015 Point Guard Jawun Evans

Buzz Williams hopes to add an elite player to the 2015 recruiting class.

Share All sharing options for: Virginia Tech In The Mix For 2015 Point Guard Jawun Evans

The Hokies have been busy trying to add talent for next season, but there have been many scholarship offers extended from the Tech coaches for players in the 2015 and 2016 classes as well.

One of the most recent recipients of an offer is 6', 165-pound point guard Jawun Evans. The Hokies offered the 2015 prospect during the first week of May and are among the final eight schools Evans is considering.

Evans is one of the top point guards in the class of 2015. He's currently rated the No. 35 overall prospect in his class and 4th best PG by 247Sports while ESPN pegs him as the 14th best point guard in the country. His rankings stand a good chance to continue rising with a strong senior season, especially considering his offer list.

As you can see in the video, Evans is an explosive player off the dribble and is excellent at finishing near the basket with contact. He's very comfortable on the fast break and finishes well in transition. With some bulk added to his frame, he could prove to be one of the toughest guards to defend in the nation.

He shows good shooting ability as well, but his strength seems to be creating his own opportunity on attacking drives to the hoop.

Jawun put his skills on display this weekend for Texas Team Elite in Nike Elite Youth Basketball League competition in Hampton, VA. His impressive play included 17 points and 11 assists in a narrow loss to the famed Boo Williams squad.

Jawun Evans in 5th gear in the open floor. Finishes thru contact. Tough and strong. 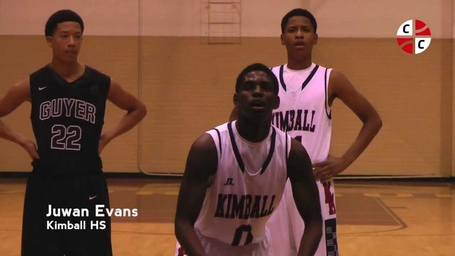 The Hokies were the last of the eight finalists to offer Evans but as we've seen in his short time on the job, if Buzz Williams gets his foot in the door with a kid he's more than capable of turning on the charm. Jawun Evans is an elite player and for the Hokies to be in the conversation at all is a great sign for the program.