Virginia Tech moved from the Big East to the ACC in 2004. How has home football attendance been affected by that move, and were the other expansion teams similarly affected? 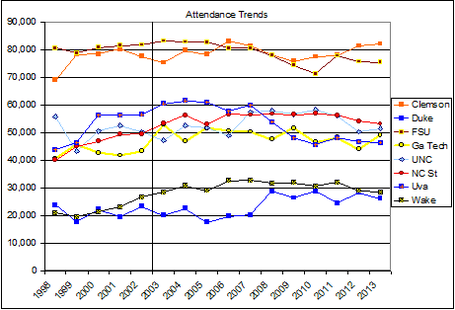 For the most part, all teams actually experienced an increase in home attendance with the addition of Miami and Virginia Tech (no doubt it was the Hokies they were coming to see!). It's worth noting that Clemson suffered through a little dip in attendance, but keep in mind they were down in football those years, so that may have more to do with them than with expansion. Now that the Tigers have righted their own ship, attendance is back up above 80k. On the other hand, it looks like Georgia Tech definitely saw a bump with the 2004 expansion. 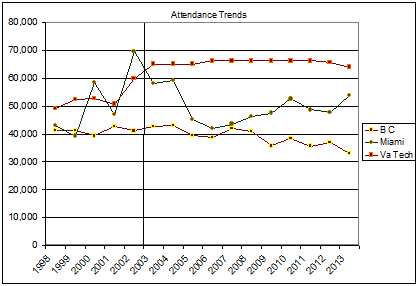 Clearly, Virginia Tech was the biggest beneficiary of joining the ACC. I never realized just how much (about 15k per game!) attendance increased when the Hokies moved from the Big East to the ACC. Part of the reason for this increase was no doubt based on geography - VT is the only expansion team located in the middle of the ACC footprint. Another reason for the growth in attendance is the expansion of Lane Stadium, which grew by 11,120 seats prior to 2002 and another 1,000 or so after the end of the 2004 season. Of course, having more seats doesn't guarantee more people (the stadium was not sold out in 2002, but went on a famous sell-out streak after the Hokies joined the ACC; still, having a larger stadium allowed the number to climb as high as they did).

Down South, Miami went into a tailspin about the same time they joined the ACC, and it shows in their attendance. The Canes are only now beginning to return to their previous level of football. Up North, Boston College is the tortoise - slow but steady. The Eagles did fall off a bit at the end of the "Spaz" era, but I have no doubts that in time the "Dazzler" will get attendance above 40k once again.

What about the 3 new additions? 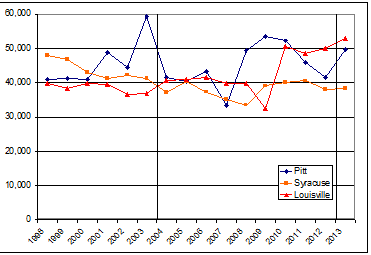 Pitt had an uptick last year, but Syracuse not so much. To be fair, the Panthers had a much better home schedule than the Orange in 2013. Louisville has been on the rise the last 3 years, so we may not see much change this season.

Note: I wondered about that spike in attendance for Pitt in 2003, so I did a little more research. That year the Panthers had Va Tech, Notre Dame, Syracuse and Miami all on the home schedule at the same time - plus they had Larry Fitzgerald. It was a perfect storm...

What does it all mean for Virginia Tech? I think it's clear when we look at these graphs that ACC football in general has benefited from expansion. I still can't get over how much it helped VT home attendance. However, the Hokies are starting to feel the affects at the turnstile of back-to-back seasons with 5 or more losses. Coach Beamer needs to get things turned around in a hurry before the program's momentum is lost.