Over the last 10 years ACC TV revenue has gone from bush leagues to major leagues.

An article about ACC TV contracts recently came to my attention which I thought you readers would find interesting. It was actually published during football season last year - by SportsBusinessDaily.com [LINK].

2006
The ACC and the Orange Bowl Committee reach a 4-year deal for the winner of the ACC championship game to play in the FedEx Orange Bowl if the team does not qualify for the BCS title game.

2012
ESPN and the ACC restructure their television rights deal to run through the 2026-27 season. The agreement boosts the deal’s value to $3.6 billion ($240 million per year.); Notre Dame joins for all sports except football, agrees to 5 games per year scheduling arrangement; Maryland withdraws; Louisville accepts an invitation to join.

2013
All teams sign a Grant-of-Rights; ESPN and the ACC revise their television rights deal for $4.2 billion ($300 million per year) through the 2026-27 season.
This infographic summarizes the moves: 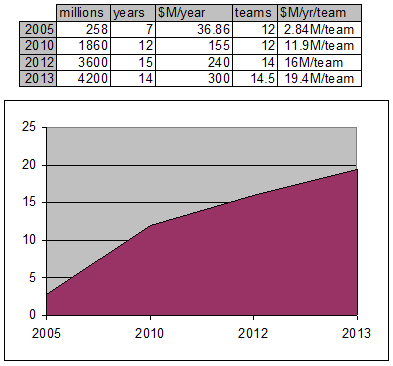 Hard to believe that ACC teams were paid a mere $2.5 million/year just 9 years ago, and now make just shy of $20 million/year!

When you see it laid out like this, it's easier to understand why the ACC school presidents never seemed to be all that worried about revenue...