How would life as a Hokie today be different if Michael Vick and the boys would have upended Bobby Bowden's Seminoles and brought home the goods in 1999? Let's hop in our DeLorean and take a look around...

We remember it well: the magical undefeated season out of seemingly nowhere, Shayne Graham's lifesaving boot in Morgantown, blanking Donovan McNabb's Syracuse Orange(men), hanging 62 on Temple, the iconic orange-sky sunset picture snapped by Simon Bruty of Sports Illustrated, then-Head Coach Bobby Bowden refusing to suspend star kicker Sebastian Janikowski from the bowl game for missing curfew on New Year's Eve, instead excusing him by saying he operated on "Polish time," and infamous clothes-swiper Peter Warrick absolutely going off once the game had begun. But, how would life be different today if the Hokies had defeated Florida State in the 1999 Sugar Bowl and brought the crystal football back to Blacksburg?

5. The trophy case in Merryman would have something in it. 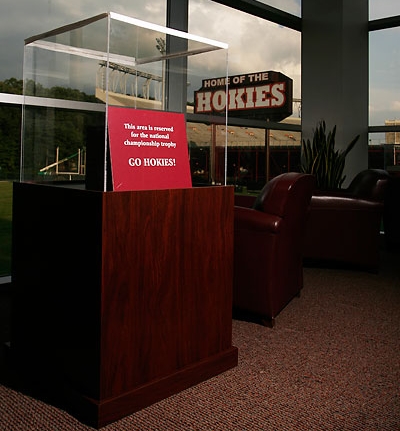 At first, the empty trophy case was a fantastic idea. It symbolized the program's commitment to winning a national title. Beyond that, the media loved it and flashed a shot of it at every available opportunity. We were that quaint little school with the cute, likeable old man coach who was going to overcome the odds and rise to the ultimate pinnacle of college sports.

Still sitting and gathering dust fifteen years later, however, it's not nearly as cute. Every Hokie football follower can tell you there have certainly been actions by higher-ups in the program *cough* Beamer *cough* that actually worked to contradict that supposed commitment to winning a (mythical) national title, namely certain head-scratching hires or coaching position shifts and allowing certain non-productive or even counterproductive staff members to remain in place far beyond their shelf-life.

Also, beyond not being cute anymore, it has become a running joke in certain circles, particularly those containing folks who have a propensity to call the team "cHokies" or those containing fans of that other in-state team (no, not ODU, the one that actually won fewer games in 2013).

Mercifully, after over a decade of symbolizing what was purportedly to come, the case has been removed as of this past Spring, and has now been replaced by a cookie jar! 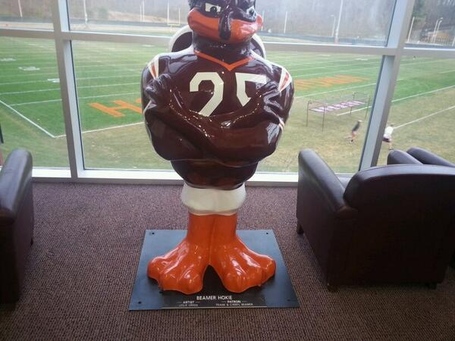 It was already starting with the 1999 campaign and carried on into the 2000 season, and probably on up thru 2005 to some degree: Virginia Tech was the media's darling.

The trophy case, the lunch pail, the dynamic, athletic freak of a quarterback, the "Aw shucks" head coach, the underdog story-the Hokies had it all. Had we been able to finish the job, we would have been able to add "giantslayers" as well . Having gotten it done, the love fest would have continued and likely grown exponentially.

We would have been on national TV constantly-even after Vick made the leap to the NFL. More highly-talented players would have likely been attracted to the Hokies, particularly those outside of Virginia. Recruiting services like Rivals, Scout, and 247Sports would likely have an increased respect for our staff and its ability to spot talent: a Virginia Tech offer would perhaps then mean a bump in a prospect's ranking rather than merely crickets, or a player's decision to commit to VT would mean he rises in the year-ending Top however many list, as opposed to now, when our commits' rankings always seem to plummet.

I actually asked Rivals analyst Mike Farrell about this phenomenon once. His reply was that our players don't necessarily move down, it's that other players move up. Maybe having selected to attend a team with a MNC victory, our guys would then "move up". But, there's a downside to the attention and respect as well: sleeper 2 and 3 star recruits that our coaching staff have made their living off of been able to bring in, plug in, and develop, would then likely receive a star boost after receiving a VT offer, causing other schools to swoop in with an offer and perhaps be able to snatch them away from the Hokies.

And yes, this does happen. From firsthand experience, I can tell you that I have seen a player receive an Alabama offer, then receive offers from other SEC schools by phone-without having ever seen the kid in person-before the week was over. How would this affect our recruiting results as we know them? Only time would have told.

The increased donations that resulted from the 1999 season and its fallout ultimately resulted in the North End Zone stands, and eventually the South End Zone construction. But, if our boys had brought it all home, would donations have been enough immediately, or as a summative result of the inevitable successful years to follow to enclose Lane entirely, making it a true "bowl" stadium?

And if teams find it hard to hear in Lane now (well, when the crowd's mind is right and they're not too enamored with paper airplanes...), imagine the absolute nightmare for opposing teams to come into a Lane Bowl and deal with the crowd noise resulting from the addition of that many more jumping, screaming, key-shaking members of Hokie faithful.

If that much money had come in, would the Merryman expansion/new football locker rooms have been completed earlier? Would the indoor practice facility already have been completed? Just how much shiny and new would we have on hand to impress recruits, and how many of those would have been impressed enough to commit to the Hokies? Clearly, we'll never know.

Having reached the ultimate pinnacle of his profession, would Frank Beamer have decided to hang ‘em up after the 1999 season?

Speaking 15 years later, we know that much is unlikely. However, following any of the subsequent seasons, would he have felt secure enough in his legacy to step away? Perhaps. Would Jim Weaver have made a career move or retired alongside Beamer? That's also unlikely if Beamer stepped aside immediately, as he had just gotten to VT, relatively speaking. But a few years down the road, it's also a possibility. Who would have been hired to replace Beamer?

The obvious likely response is current Hokie Defensive Coordinator Bud Foster. Would Foster have run the defense while head coach? Would he have promoted Lorenzo "Whammy" Ward, who is currently the Defensive Coordinator at South Carolina? Would Torrian Gray be a part of the Hokie staff in any way? If not, where would he be today? How many successful Hokie DB's would have gone wherever Coach Gray was? What if (ugh) Gray would have ended up at UVA? Would we still be able to claim our "Decade of Dominance" over the Hoos?

What offense would Foster have run? Would he have named Stinespring as Offensive Coordinator, or chosen to go outside the "family" and bring in someone to lead the offense? What type of offense would they have brought? Would we still have had the same level of success through the Tyrod Taylor years? Would we have been able to get over the hump in any of those years and win it all again? Would Tyrod have even elected to come to VT in the first place? So many scenarios here. It's easy to see how fragile "cause and effect" is here.

When all the drama went down a couple years back and conference expansion was en vogue, there were definite whispers that the SEC was very interested in adding Virginia Tech to the fold. The alleged response to that was that then-Athletic Director Jim Weaver and Frank Beamer weren't interested in moving out of the ACC.

Depending on who you ask, that was due to conference loyalty, in-state pressure (as in the same kind of in-state pressure that got us into the ACC in the first place), lack of interest in involving ourselves in the "ethics" of SEC recruiting, legitimate happiness in the ACC, or some combination of those factors. But, if we had won it all in '99 and Coach Beamer retired sometime between then and 2011, would we-in the resulting alternate universe-currently be in the SEC?

Would they have pitched us harder than they allegedly did because our resume was much stronger? If Weaver left when Beamer retired, would Weaver's replacement have been more open to the idea of a conference move? If not, would the new head coach (Foster?) have been able to sway Weaver to the SEC? Would the new head man have even wanted to make the move? Backing up in time even further, would Beamer/Weaver's line of thinking have changed when it came time to leave the Big East, resulting in VT moving straight from there to the SEC, bypassing the ACC altogether? So many scenarios. This one's a true "Choose Your Own Adventure" book.

Editor's Note: Who else here cheated in those books? I never had a bad adventure and my team always won the championship.

Keep in mind, though, that winning a (mythical) National Title would not have automatically translated into sustainable success. We could have springboarded from our theoretical title and won multiple titles, which would surely have cemented Virginia Tech in the upper echelon of NCAA football teams. Or, we could have gone the way of Colorado/Georgia Tech, who split the title in 1990 and faded right back into college football mediocrity. Either way, though, we would have something beyond a string of 10-win seasons to hang our hats on, and that's a definite improvement over where we sit today. And no matter what, we'd never have had to endure the embarrassment of the empty trophy case.