Will they hole him up in a Motel Six underneath an Athens, Georgia overpass to protect him from Dixie Mafia gun thugs? Plenty of coffee in styrofoam cups and games of checkers with special agents?

No, probably not so dire a situation for VT Head Football Coach Frank Beamer, but it is worth noting that his name turned up on the witness list for ex-Georgia Bulldogs coach Jim Donnan's upcoming trial in Athens, GA. Jury selection began today, in what looks to be an egregious fleecing of friends and colleagues from 2007-2010.

Of course, nobody is guilty until proven so in a court of law, but the amount of money siphoned away from a number of noteworthy football "industry giants" is going to spring some headlines. Here are some of the key details:

What Exactly Was Frank Involved In?

At one time, a man named Gregory Crabtree had a reasonably healthy little outfit called GLC Limited, a WV corporation, with a net worth of $3MM, that operated discount retail stores. So far, so good.

At some point in 2007 after Donnan joined forces with him, however, the mission became "Closeout Merchandise", with the intention of buying leftover merchandise from major retailers at pennies on the dollar and reselling said merchandise to "discount-retailers".

Using his connections, Donnan managed to secure upwards of $82MM from investors, of which only $11MM was spent on the business. Further, the "greedy" investors were promised returns upwards of 70%, which is just preposterous 99.9% of the time. Considering most of these men have their money tied up in high yield real-estate or safe funds that return 10-15% in their best years, it should have sent up numerous red flags, but I digress.

Beamer looks to have been one of the lighter investors. As Donnan's handwritten notes indicate Frank paid in $100K and was promised $70K in return. See this (courtesy of SportsbyBrooks) 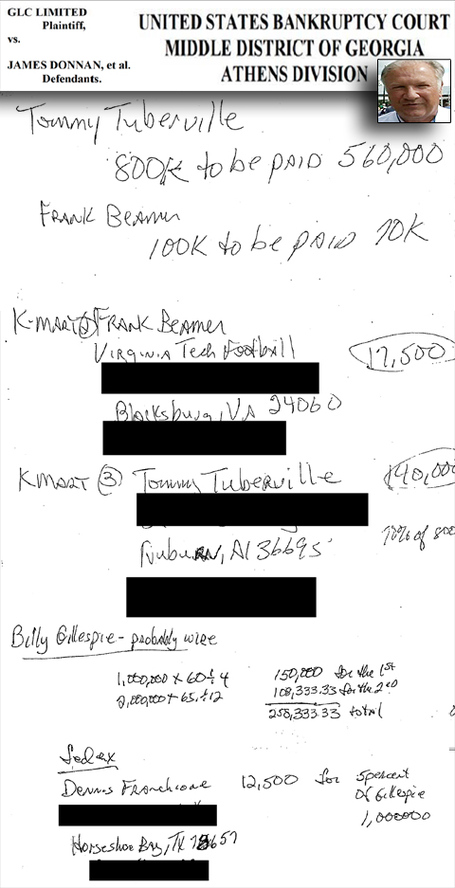 Technically only $22.9MM has been lost, so some monies have been recouped. This is likely due to former Texas A&M basketball coach Billy Gillispie starting the investigation rolling by recalling the $1.9MM he invested in the company. In a particularly scandalous turn of affairs Donnan actually paid ex-Texas A&M football coach Dennis Franchione commissions for helping Donnan garner investments from Gillispie. Again, Sports by Brooks:

1) Allegedly presenting himself as representative of GLC, Donnan would solicit "loans" from friends and sports celebs like Tommy Tuberville, Frank Beamer, Mark Gottfried and recruiting analyst Tom Luginbill with the promise of annualized returns of up to 70%. Donnan’s pitch was to tell alleged victims that their money was going to purchase surplus retail items that would eventually be resold. (Funding GLC’s business model/operation.)

Donnan's wife Mary and other family members are named as defendants in some of the filings. Crabtree has already pled guilty as of April, and is awaiting sentencing.

Donnan believes he was paid $14MM from profits the company generated, and that the plan to repay creditors out of the Chapter 11 filing was sufficient to the SEC, and is flummoxed at the 47 count indictment. He is essentially putting the onus on Crabtree here as the mastermind. This is unlikely to convince anyone. To his credit, the indictment was at one time 85 counts at its origin in 2013, so perhaps there's room for reduction.

But as Jules (Samuel L Jackson) in Pulp Fiction once said to Brett (the one with the big brain): "My name is Pitt, and you ain't talking your way out of this _____".

Safe travels to Athens, Coach. Hopefully your time inside the courtroom is either brief or unnecessary and you can get on over to Lake Oconee for some more R&R. And perhaps you canz pick us up a four-star while you're down there.

More on this as it comes folks.