Four Star OT Austin Clark Chooses To Be A 'Cock

Share All sharing options for: Four Star OT Austin Clark Chooses To Be A 'Cock

Highly touted Offensive Lineman Austin Clark from Lexington, VA has made his college choice this evening, choosing to play for the "Ole Ball Coach" at South Carolina over Virgina Tech, An Ohio State University and Tennessee who were a part of his final four choices. 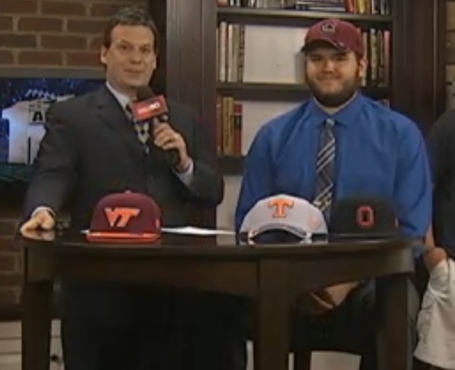 The 6'6", 300lb four-star standout who resides just a little over an hour north up Interstate-81 from Blacksburg is just another prospect in a long line of blue chip players to spurn the class program in the Commonwealth and head down south. The trend of top Virginia talent going out of state to play for programs such as Florida State, Clemson, UNC, and the SEC (insert program here) continues to add to the Hokie faithful's great frustration.

You would think with a well established program with a legendary coach very close to home would be a no brainer for most. I don't think this is an anomaly by any means either, this is a definite trend that has been going on for a while and one that I think Tech supporters have actually become accustomed to. There is a halo of apathy when it comes to recruiting highly touted offensive players, especially lineman.

How come we allow someone from another neighborhood to waltz right on into our backyard and steal produce from our garden?

What can we attribute this continuous futility to? Our offensive line play has been underwhelming for some time now, let's just be honest. Those top prospects notice, they watch TV, they see us spinning our wheels from the stands on official visits,  but mostly they talk to other players and coaches, and that goes a long way in establishing a reputation. Our offensive woes are definitely having a direct effect on recruiting top rated lineman.

SETTLE DOWN, YOU'RE OUT OF WHACK!

Am I? Or am I just being real? The truth on who you are now as compared to who you were hurts. For those who have followed VT football recruiting for a while understand where I'm coming from. And if you don't, you must be an overly extremely positive person and ultimate optimist. Good for you.

Let me take you back to four months ago to National Signing Day. How many offensive lineman did we sign? Four. How many were from Virginia? None. And don't forget, our highest rated O-Lineman at the time Brady Taylor decided to de-commit from Tech to attend his hometown school in An Ohio State University.

To add to that, 2014 four star offensive lineman Steven Moss from Fredericksburg, VA decided to play from Coach Mike London at UVa. Coleman Thomas, another highly rated O-Lineman from Ft. Chiswell, VA opted to head to Tennessee instead.

IS THE SKY FALLING?

No. But this is highly annoying and something our coaches should not let happen. Maybe it had something to do with Coach Jeff Grimes leaving us for LSU? Perhaps, but Coach Searels has been a part of major programs himself so I really don't buy the inferior coaching excuse anymore. Did the mess former O-Line Coach Curt Newsome cause more problems for our overall perception than we thought?

VT still ranks annually in the top 25-30 teams in recruiting rankings annually. But, when our goal and mission statement is to keep the top players in-state this trend has to be very concerning to all stakeholders.

WHERE DO WE GO FROM HERE?

Tech still has one more shot at a top flight in-state offensive lineman in four star Matthew Burrell from Hylton High School in Woodbridge, VA. Northern Virginia hasn't exactly been nice to VT recently either, but we did manage to procure the services of his former teammate in dynamic ATH Travon McMillian in the 2014 class. In addition, we also have DB Greg Stroman who also is a Prince William County product out of Stonewall Jackson High School in Manassas, VA (Ryan Williams and 2015 five star DT Tim Settle).

I wouldn't hold your breath on Burrell, though. 247sports has Alabama, Ohio State, Florida, Florida State and Notre Dame as his top five leans thus far. The 6'5", 290lb stud also seems to be receptive to South Carolina, Texas, Penn State and yes, our beloved Hokies. Coach Searels has quite the mountain to climb.

It looks like Tech will once again have to go out of state to land its 2015 class of offensive lineman. Lets hope we can keep most of our top in-state targets at other positions at home.