Brendon began the day making wise use of Moving Day at the 114th US Open at Pinehurst No. 2 leapfrogging all of his competitors into 2nd place setting his sights to play in the final group on Sunday only to see his ride begin leaking oil on the inward nine. He'll enter Sunday T10 at +1, nine back of leader Martin Kaymer (+8)

Share All sharing options for: US Open 2014 Round 3: Hokie Brendon de Jonge Earned His Battle Scars

In addition to moving day at the 114th edition of the US Open at Pinehurst No. 2, we have the innumerable human interest stories that captivate the nation's fans every year,  and this year is no different. One such story is the 125 pound soaking wet high school junior amateur, Will Grimmer who at age 17, had the most fun of anyone to ever shoot +15 and miss a cut.

The affable young man with a coat hanger grin did himself and his game proud making the loop with 155 of the world's elite golfers. The low amateur in England, Matthew Fitzpatrick (+4) another flat belly 19-year old Northwestern U product and reigning US Amateur Champion who will be turning professional after this event concludes.

The "Alabama Slammers" - Justin Thomas, Cory Whitsett, Robby Shelton, Smylie Kauffman, Sam Love and Danny Willett represented my adopted state very well coming off back-to-back Crimson Tide NCAA titles - not to mention five current PGA Tour regulars including Masters Champion Bubba Watson (MC +6). Lee Westwood (MC +8) the highest ranked player in the world not to win a major championship wondering will that week every reveal itself. Gonzalo Fernandez-Castano (MC +12) who's name was as colorful as his scorecard with more vowels than pars. England's, Graeme Storm whose sister Gail is likely to be on the Weather Channel later tonight. The "Twenty Somethings" in Zac Blair, Nicholas Lindheim and Clayton Rask, 3 of 10,127 entries who made it from local qualifying to play over the weekend. This is where the significance of the event resides: Everyone has a story and everyone has a dream!

In twenty-four hours, the possibility of walking off the 72nd hole at Pinehurst No. 2 for Brendon de Jonge as the 114th US Open Champion remains a possibility. Probable? For Brendon, he would prefer the course to dry out, quicken and have the winds freshen feeling that would eliminate half of his adversaries. If he is to play for his first major victory on Sunday he will need some help from 2010 PGA Champion Martin Kaymer.

History, they say, repeats itself and the possiblity of a PGA redux exists today. Brendon and Martin were joined at the hip starting that weekend at Whistling Straits (2010) tied at 140.  Sadly, Brendon faded with 74-75 finish to Martin's 67-70 tying then defeating Bubba Watson in a playoff. Moving day is an uphill climb with such a two day performance that Martin Kaymer had executed.

Executive Director's Mike Davis' prayers were answered with rain holding off and the winds drying out the course making for a firm fast track for the final 36 holes. The only dark spot running up to Brendon's 2:52pm tee time is his playing partner in Keegan Bradley, one of the rising stars on tour. He's a version of ADD meets turrets with his psychotic jerkiness pre-shot routine that's far more annoying than Sergio Garcia's waggle whipping ever was. The nephew of  1981 US Women's Open Champion and Hall of Fame member Pat Bradley finished T68 in 2012 and defeated Jason Dufner via playoff earning his first major in 2011 PGA as a rookie and three additional PGA Tour wins. If Brendon can tune out the inane tics and squirrel-like behaviors, then he'll play just fine - mental note: pack some Adderall. 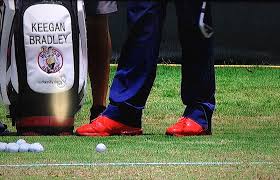 WTH was squirrel boy wearing? This guy's on course behavior has gone waaaaayy overboard and far past distracting. Brendon jumps the shark himself sporting the French Blue AUR shirt and Snow White Firethorn pants. At least these guys have style unlike Golf Channel's Todd Lewis' salmon pants amongst an array of dark blues checks - and I though plaid was his favorite color. It's one thing to look the part but you better back it up. Bradley? Not so much, as he vomited all over himself with bogeys on his first three holes. While our Blue Collar guy loomed at the top of the leaderboard for much of the day thanks to a sliding putt on 3 to go -3 for week...and Kaymer's back tracking begins.  Brendon continued his surge hitting the par 5 fifth hole in two and a masterful two-tier 42 footer for eagle and a tap in birdie now had him within five of the lead. Brendon gave one back on the 224 yard par 3 sixth hole with a putt from McKenzie and Beulah Hill Rd (looooong ways away for you neophytes) while Kaymer absorbed an unplayable lie penalty from the straw yielding another stroke to par.

Woops! A difficult up-and-down from the greenside bunker awaited BDJ as he tried to smoke a wedge into the tight right flag - not the play with 18 paces of width left of the flag mind you - his first unforced mental error cost him. While Kaymer had hit another early release diving left tee shot into the native area again he miraculously hits a mid iron onto the par 5 in two barely 12 feet away for eagle and a return to -10. Brendon settled down to close out the front nine with 8 iron into the par 3  ninth to nine feet for birdie and -3 T3. Erik Compton had made a steady rise up the leaderboard with an eagle on 5 and 4 birdies through 11 holes.

BdJ reached the par 5 tenth in two with a hybrid and another 40 footer for eagle that slid left of the cup a few paces past the pin for an easy birdie and -4 tied for 2nd with Kevin Na. A wayward tee shot on 12 and an approach from the waste area left BDJ with 35 feet for par turning left only to fall short drops him back to -3. Kaymer continued to stripe the ball from the tee after settling down making the turn +1 for the day leaving him still 5 shots separated from the field at -9. The false front bites Brendon on 13 as his iron barely caught the green, only to spin back some 60 feet leaving an incredibly delicate pitch. His par attempt falls short bringing him back to where he began the day. Rickie Fowler and Erik Compton shoot 67s to take the lead in the clubhouse until the final pairing at -3, the best rounds of the day.

As oil continued to leak from his game, Brendon settled the back-to-back bogey slide with an long bunker shot on the 489 yard par 4 14th hole to 3 feet for par. It didn't last long however, with his Titleist finding another green-side bunker. For some reason his bunker swing was incredibly flat instead of early upright set which knifed the ball a good 30 feet over the green resulting in another bogey. Kaymer and Na continued their level back nine play as 1 and 2 respectively with five players now tied at -3 one ahead of Brendon now in a tie for 9th. As play nears its end on Saturday several players reminded us of US Open at Forrest Hills not Pinehurst with pitches and chips chilly dipped and skulled across greens by the likes of Spieth, Na and others - it's been an epic yard sale!

With moving day coming to a close, Brendon's game saw flashes of brilliance as well as pain most notably hitting 12 of 18 greens his worst stat of the week today. While he drove the ball well across the fast, dry track, the greens didn't yield as foreseen with little room for error. Kenny Perry stated this round was the most difficult pin positions he's ever seen in ANY tournament. While Brendon's short game is solid, his bunker play has been an achilles this season, and unfortunately it showed today. The final 8 holes undid a promising round for our All American frustrating the normally patient birdie machine, and the shining spot is a Top 10 finish reality heading into tomorrow's final round. Brendon go fetch ya' a big ole' steak and full glass of wine sir, ya earned it!