The Open Championship: Cardiac Back 9 Has de Jonge in Pot Bunker

Wednesday saw all four seasons yet Thursday was as benign as it will ever be as former VT golfer Brendon de Jonge took on his first Open Championship at Royal Liverpool Golf Club in Hoylake, Merseyside England. The tide rarely comes in against the seascape and unfortunately, Brendon couldn't take advantage of the calm before his stormy round.

Share All sharing options for: The Open Championship: Cardiac Back 9 Has de Jonge in Pot Bunker

Today was one of those days that began in magnificent splendor - a gentle breeze, 20 degrees Celsius, an incredibly lush and hard playing ground - a day made perfectly for scoring. With the exception of John Daly's Spongebob Squarepants practice round attire, today's competitors looked more like a Thursday afternoon runway exhibition in Milan. The morning wave scored +27 over par while the afternoon batch felt the effects of freshening winds and little patience +82 so far.  There were fourteen rounds in the 60's early on and only 2 this afternoon.

Much of the news focused on Rory McIlroy's easy walk-in-the-park blemish free 66, Tiger looking like Tiger and Bubba looking like a yard sale. Sadly, Ernie Els had an out of body experience playing hockey from 8" from the hole taking 4 to get down earning triple bogey 7 in a "WTF just happened?" moment. Local hero and 30-year old resin factory worker, John Singleton, who lives two par 5's away from Royal Liverpool in Merseyside took most by surprise inside the ropes yet finished +6. Bryden MacPherson, the former Ga Bulldog product brings up the basement of the leaderboard as he began an inward nine more like that of a zip code as opposed to a golf score with 7-6-8-4-7. Then there's our boy Brendon de Jonge who was an odds on favorite sleeper pick via Ladbroke's but 3 bogeys on the outward nine sealed an unfavorable first round in his initial Open Championship. 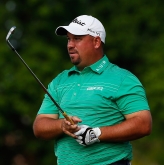 After a par-bogey-double bogey start to the back nine, Brendon bounced back with birdie 2 on the par 3 13th hole only to give it back on 14 with bogey. Coming to the TV holes, de Jonge went par-birdie-par somewhat taking advantage of the scoring holes but gave it back bogeying the 5 par final hole. In every tournament and in every major, it is said you can't win it on day one, but you can certainly lose it on day one. In order for BDJ to get inside the top 70 and ties, he'll need to reverse his fortunes with at least a -3 par finish to get under 148 where 85 golfers currently sit. Rose vs. McIlroy doesn't resonate a lot stateside, but the world golf stage should prove to be as exciting a weekend in professional golf as we've seen since Augusta. To pour salt in the wound, Brendon will face gusty winds, rain and continued misfortune of the elements as he attempts to play the weekend at his first Open Championship. 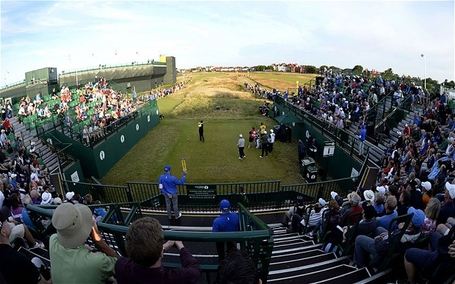