In a football game, each team gets about the same number of possessions. It's what you do with them that counts!

2013 was a disappointing season for Virginia Tech football fans. Even though the team had one more win than the previous year, some of the losses - Duke, Boston College and Maryland, in particular - sat heavy in the stomachs of Hokies everywhere. Of course there are always individual plays, bounces of the ball, etc. which affect the outcome of games. However, if we look back at overall statistics, are there any trends which need to be fixed by the coaching staff?

In a football game, each team gets about the same number of possessions. It's what you do with them that determines whether your team wins or loses. With that in mind, here is a look at how all possessions* ended for Virginia Tech and its opponents during the 2013 football season:

* note: I was not able to get any data on possessions which ran out of time at the end of the half or the game.

Here is the Virginia Tech data in Pie Chart form: 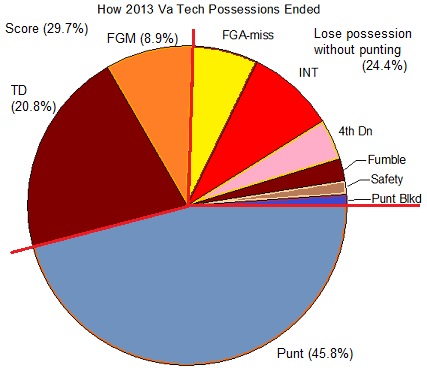 What can we conclude from this data? Several things...

Last year the Hokies lost possession of the football without scoring or punting 24.4% of the time. That means that the opponent received the ball in excellent field position almost every fourth possession, which should scream "totally unacceptable!". Even the ball-hawking Virginia Tech defense was only able to flip field position 23.8% of the time—despite more interceptions and fumbles recovered.

Lesson #1: a punt is not a bad play when you consider some of the alternatives.

Part of the problem with the way Virginia Tech possessions ended was the number of missed field goal attempts: 11 for Tech but only 3 for the opposition. In fact, Virginia Tech attempted far more field goals than its opponents (26 vs. 15). This indicates a mentality of settling for a field goal rather than aggressively pursuing a touchdown. So each time the Hokies kicked a field goal, they may have gotten three points but they were leaving four more on the field.

Lesson #2: a field goal is worth less than half a touchdown - don't play for field goals.

Had they been applied, would those lessons have changed the outcome of the three losses in question? Let's see...

Bottom line: hold on to the football long enough to punt, and don't fall in love with the field goal. If Virginia Tech can do those things, 2014 can be a much better season.