After missing out on a number of top targets, Hokies look to regain momentum

The past few months following VT football recruiting has been quite painful, missing out on top targets at positions of need coupled with losing out on top prospects in our backyard and home state hasn't helped brighten the moods of the Hokie faithful either. Is Tech is line for a rebound and momentum change to kick start it's 2015 class into high gear?

Let's begin with news from this past Thursday when news that 2014 Tech signee DE/DT Kevin Bronson (6'4", 240lbs) out of Delray Beach, FL (Village Academy) was given his release by VT and subsequently enrolled at South Florida. This is not welcomed news by Hokie fans as losing depth on the defensive line is the LAST place we can afford to endure further attrition. It appears Bronson was one point shy on his ACT scores and was not given the green light from the Tech academic committee. See the quote from his high school head coach, this is not how you want to hear a coach talk about how you handled his kid:

"After Signing Day, Virginia Tech said he'd need a 17 on all categories," said Hanna. "He ended up being a point shy on English and Math. We were told if he didn't get it, they'd go before the [academic] committee and they'd be able to get him in." "The closer we got to him coming up, they started saying, 'There's a 50/50 chance we'll be able to get you up.' They were giving him the run-around." "They didn't treat Kevin right from the beginning. He was like a second-tier guy for them. They missed out on some other defensive linemen and took a chance on Kevin. I don't think he would have had a great career there because he wasn't one of the guys they wanted." After informing Bronson he was short of qualifying, Virginia Tech said they wouldn't be able to get him in asked if he would enroll in prep school during the fall. Following that discussion, Bronson requested for his scholarship release. According to Hanna, the school made a sudden reversal as Hokies' head coach Frank Beamer then told Bronson he would go to the head of the academic committee and get him in. By that point, Bronson and his family decided they were ready to move on. "Once that happened, [Bronson and his father] came to the conclusion that they don't want to deal with that going forward."

The most glaring part of that whole things was when the coach stated:

"They didn't treat Kevin right from the beginning. He was like a second-tier guy for them. They missed out on some other defensive linemen and took a chance on Kevin. I don't think he would have had a great career there because he wasn't one of the guys they wanted."

Ouch, even he knows we wiffed on most of all our top targets at DL this past signing day. There's always two sides to every story, but I'm pretty sure we won't hear the VT side...and when you don't hear both sides of a story most people are going to believe and formulate their own perceptions from that explanation. Not good.

ANOTHER LOCAL PRODUCT GOES OUT OF STATE FOR SEC GLORY:

Three weeks ago, four star offensive lineman Austin Clark (Lexington, VA) chose SEC program South Carolina over the hometown Hokies. How does Tech stop the drive by on I-81 of top ranked lineman headed south for the riches and grandeur of the SEC?

In the Roanoke Times article, Hall said his final two choices came down to Vanderbilt and Tennessee. His relationship with former All Timesland Offensive Lineman Coleman Thomas of Fort Chiswell, VA appears to have made a great impact on Hall's decision:

"We’ve been texting a lot and talking about it," Hall said. "He had a big role in the decision."

I know Offensive Line coach Stacy Searels has his hands full in changing the perception and on-field results for that unit. Until then, I feel we shouldn't feel like we deserve or "should get" these top ranked recruits anymore. This is a very what have you done for me lately game/business and results matter. Numbers and stats matter. These kids are smart, they watch and understand who has what to offer and who can optimize their skill set to get them to that next level.

DUDE, DO YOU EVER HAVE ANY GOOD NEWS?

Actually I do! In the wake of learning about the release of Kevin Bronson and recently missing out on in-state four star (247Sports) prospect Clelin Ferrell (Richmond,VA) and Maryland native three star (247Sports) Dee Fullwood, who surprised many when he chose lowly SEC program Kentucky -- Tech finally got some good news.

Saturday morning gave us the verbal commitment of high three star (247Sports) Defense end Trevon Hill (6'3", 210lbs) from Salem High School in VA Beach, VA. A position of need and a victory in the "757" was welcome news to Hokies waking up from their 4th of July hangovers.

Check out Hill's highlight film (hudl). Hill projects as a speed-edge rusher with excellent speed and quickness. His agility and aggressive play will fit nicely in Blacksburg.

And just a few hours later former UNC Tight End in first round NFL draft pick Eric Ebron actually posted a comment on Hill's Instagram account after learning that Hill had chosen the Hokies over the Tarheels: 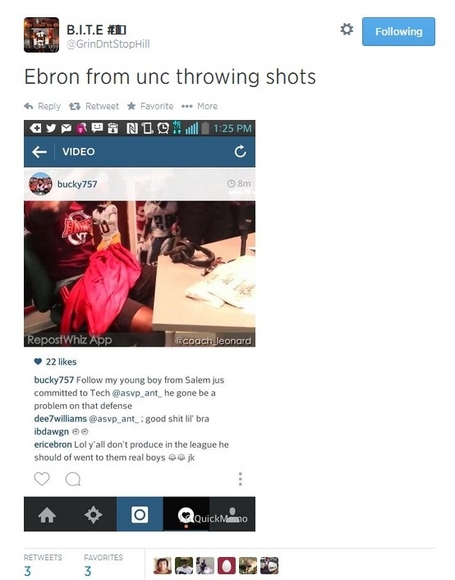 Oh no he didn't. Yeah, actually he did. His statement isn't entirely true, but perception is reality most of the time and Ebron was the 10th overall pick in this years draft from a rival conference foe UNC, so I guess he has a little room to talk smack. 27-17, Eric.

ANOTHER COMMIT ON THE HORIZON?

Yesterday was a great day at Best of the DMV combine. I managed to pick up 4 offers on the ride home. #VT #UConn #DelawareState #maine

Based upon those schools, Tech and lead recruiter Cornell Brown should have no issue closing the deal on Dozier. Dozier also holds offers from WVU, Marshall and Cincinnati. An under-rated athlete, Dozier has a great frame to stack on 20-30 lbs hoping to add to Tech's depth on the front seven.

This would be a great get for Tech in its quest to replenish the gaps in our defensive front depth. Gaines also holds offers from the Florida Gators, Miami Hurricanes and NC State Wolfpack.

I got nothing but love for #HokieNation 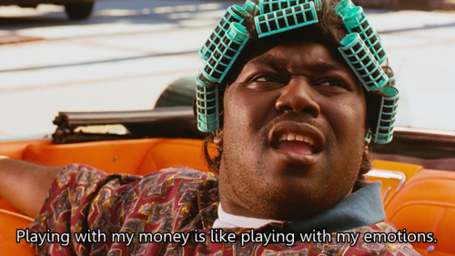 Despite the early struggles Tech has endured this year, the Hokie staff is in position to turn this year into a very solid to great class if it can finish in on their top remaining DE/DT prospects.

Stayed tuned for more recruiting updates as they happen!