Virginia Tech Football: First Watch Lists Are Out, And No Real Surprises Contained Within

As the college football awards watch lists begin to disseminate over the next couple weeks, we begin to see how our top Hokies stack up.

Share All sharing options for: Virginia Tech Football: First Watch Lists Are Out, And No Real Surprises Contained Within

The Maxwell award is in it's 78th year, and has been won in recent years by players like AJ McCarron and Andrew Luck. The only defensive player since 1977 to have won the award is Manti Te'o of Notre Dame, who won the award in 2012, along with the Bednarik award as well. The only two-time winners of the Maxwell? Notre Dame's immortal Johnny Lattner in 1952 and 1953, and Little Timmy Tebow who won twice with Florida in 2007 and 2008. So it takes the threat of the rapture, or a talent base ravaged by a savage war like the Korean conflict in order for Maxwell voters to issue the award twice. As a side note, Virginia's own Bill Dudley won the Maxwell Award in 1941, and then Pearl Harbor got bombed.

Since VT is in a rebuilding phase on offense, try and say that twice without laughing (or crying), it's understandable that the list is bereft of Hokies. Nobody is quite sure at this point where the offense will be coming from, besides Juice Williams (I am of strong belief), and an array of able improving receivers. The Hokies no longer have a player who they will insist on running 99% of their offense through, so hopefully we have a breakout star who can make some noise for the award as the season progresses. Here is the initial watch-list: 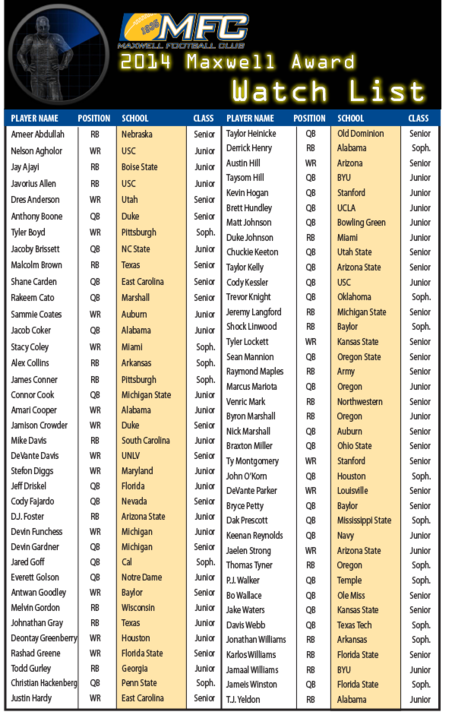 Now we come to more familiar territory. The Bednarik Award. D-FENCE. In existence since 1995, probably because it's namesake threatened some important people with only his large, gnarled mandibles. Chuck Bednarik should have been institutionalized in the 1950s. For those who are unacquainted with Concrete Charlie:

So does a psych test go along with the numbers in terms of determining a winner here? Maybe mixing a couple alka-seltzer tablets in the mouth before plays to simulate a rabid condidtion might go a long way towards Luther Maddy or Kendall Fuller winning this award.

While it would be fairly unheard of for a true sophomore to win the award like Fuller, his family name might vault him up into striking distance. But I have a feeling Brandon Facyson might be the targeted cornerback in D-block this year and turn it into a Jayron Hosley type opportunity, where he saw so many targets due to the other side of the field being locked down. And sometimes it takes folks longer at the college level to notice that guys aren't getting picks because they aren't getting thrown at. Fuller is excellent in run support too, just like his older brother Kyle, who just earned a first round contract with the Chicago Bears. More plays like this one here (whether the ref gets the call correct or not) will go a long way towards making noise for the Bednarik

We can all agree though that the Hokie defensive attack will begin up front. And that front is anchored by senior Luther Maddy, who is not only a personal favorite of mine to watch, but a true leader. If Aaron Donald could win this award last year despite playing for a lesser program, with fewer weapons around him to attract attention, then Maddy might very well have a field day. With speedster Dadi Nicolas on the weak side wreaking havoc, and the finally (hopefully) complete terror that will be Corey Marshall alongside him, Maddy might be able shed one-on-one attempts at blocking him and gain that crucial penetration that will allow the D-Block to pick off fluttering quails with frequency. Big Lu is ready to shine, and get himself playing on Sundays. Being named to this watch-list is just the start. And here is the list: 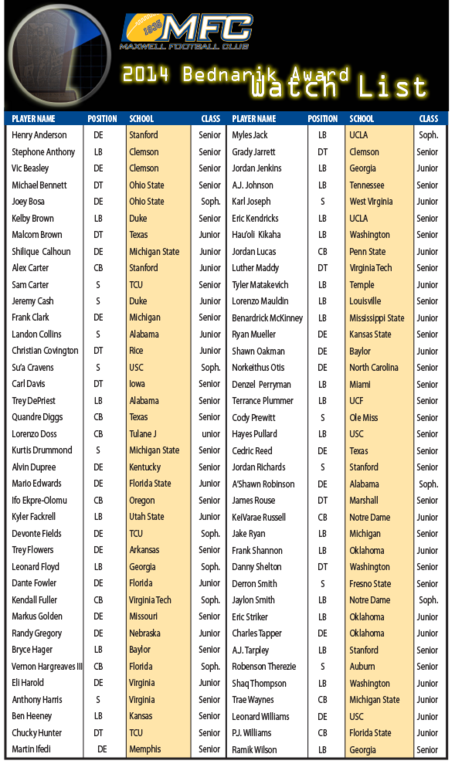 Notable past winners include Lavar Arrington over Corey Moore in 1999. How in the f.....? Oh, Bednarik went to Penn (wonder if he was a Wharton scholar LOL). Yet another award/job Lavar has earned without merit (those of you in the DC area who watched him limp through his Skins career here and are subjected to his daily radio show know just what I mean)

Northwestern coach Pat Fitzgerald and former Buffalo Bill Paul Posluszny are the only multiple winners since the award's inception. There were 76 players nominated this year. So that gives us a 1 in 38 shot. Slightly worse than an exact roulette roll. Let's hope that our guys' play tilts the wheel a bit.

In the coming days, the other watchlists will be announced. They are as follows: