For 40 minutes, Mr. Stubbs graciously sat through all of my questions and painted me a picture of a life lived within the demands of the diamond. Today, we bring you part two of Mr Stubbs journey, from the time he turned pro with the Dodgers through his time in Houston with the Astros.

Yesterday we posted the first part of a long interview I conducted with former Hokie baseball great Franklin Stubbs. You can read it here:

Today we focus on the early portion of his pro-career, which could probably be categorized as the most glamorous; for many reasons which will reveal themselves. We pick up where we left off yesterday:

Were you surprised to go in the first round (#19) to the Dodgers, a team that was fairly loaded at the major league level and just two years removed from a World Series title? You were pretty major league ready at the time. What were your thoughts on your draft position and the task ahead?

You never know. Some people said higher. Some said about where I went. I had no idea. I just remember knowing I wanted to go in the first round, and them the guys they took who they thought was the best available left in the draft, which I thought was a great compliment, and a great start to my career.

You didn't have much difficulty handling minor league pitching (including a four home run game at AAA). When you got called up in 1984 for half the year, how difficult was it to go back down to the farm in 1985 for the whole year?

It wasn't difficult. Even though I wanted to go up in 1984, sometimes you're just not ready yet to handle the situation. So when I got sent down in 1985 I asked them not to call me back up, so I could get my feet under me. Wanted to go back down and have a great season, and from that point on I was good to go. 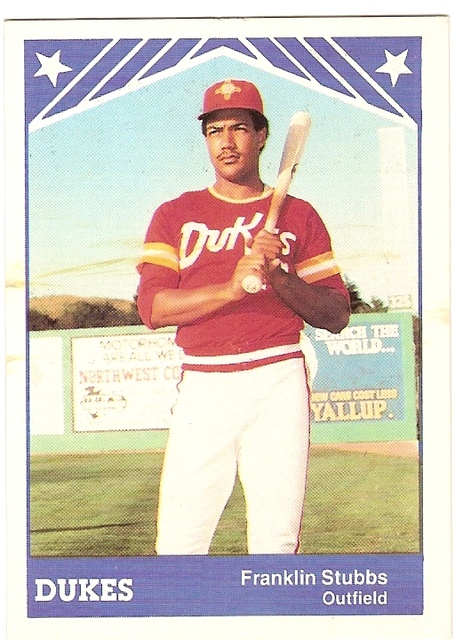 What position were you looking to play with the Dodgers as far as where you would fit in? Were you trying to unseat the first baseman at the time? Or play the OF? Since the DH wasn't available to you playing in the NL?

It really didn't matter. It was more important that I learned to play the OF, any way to get my bat in the lineup.

So you learned how to play OF in the minors?!

Once I got to AAA in 1983 they taught me how to play all three OF positions.

Were you comfortable playing OF for everyday?

I actually pretty much played OF for Houston everyday, no difficulties for me at any of the positions.

You established yourself as a destroyer of right-handed pitching. But you got worked in on a platoon basis in LA. What was it like to discover the frustration of hitting lefties when you're doing so well against righties?

It happens in this game. Very few guys can hit LH pitching well. Can't really go overly frustrated. Just try to get adequate at it. Working hard at this can make you better from your stronger side.

Sorry about the negative, let's shed a little shine on one of your finer moments: The game-winning Grand Slam off the Cardinals Todd Worrell in the 8th inning of a game the Dodgers were trailing 3-0 at the time. What do you recollect?

Jose DeLeon (an immortal 2-19 for the 1985 Pirates) was untouchable through about seven, but then we started putting a couple things together, got a couple guys on. Next thing I knew was I was up with the bases-loaded. They brought their all-star closer on (Worrell) who didn't walk too many guys and I knew he was gonna throw strikes and stay around the plate. He threw me a slider on 2-2 that to this day I have no idea how I got a piece of it. And at 3-2, I knew a fastball was coming and I got all of it, we won the game. Great moment. 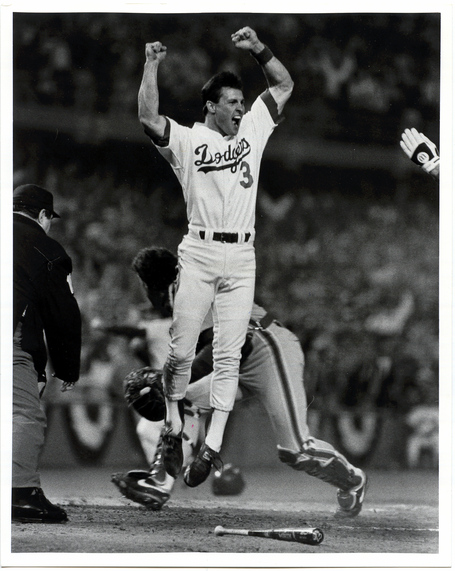 You got to face all the star pitchers in the mid-80s, like Doc Gooden, Nolan Ryan, Steve Carlton, Mario Soto, Joaquin Andujar. Who gave you the most trouble?

Rick Aguilera was a guy who gave me fits. And his teammate on the Mets, Jerry Koosman who was about 38 years old when I got to face him. He could break a lot of bats.

Who could you jump on?

As a Braves fan, I have to take umbrage, you got to see early Maddux with the Cubs, not with the Braves  (TIC)

You got to watch Orel Hershiser up close in 1988 when he set the consecutive scoreless innings streak (59 innings). How much of that was luck vs skill?

His location was unbelievable. He could get guys to hit it where he wanted them to. Sure there was some luck though. One time he hit a guy, but the ump told the hitter he had leaned in and couldn't do that, and he wound up getting the guy out. He was just dialed in on every pitch he threw.

They called him Bulldog. What I didn't realize is that you had a nickname of your own: Cadillac. How did you obtain that?

I got that way back in Spring Training from my batting coach, who told me "Hitters drive Cadillacs".

In 1988, the Mets were looking strong again, much as they had when they won the World Series in 1986. Yet the Dodgers handled them with relative ease. How much were you salivating as a LH hitter over the fact that the Oakland A's (heavy favorites) would be starting nothing but RH pitchers?

It was great for us. The A's threw a lot of fastballs. Once we got past the Mets, who I thought were the best team in the league. We were fortunate to get past them and win the pennant. The National League style at that time was superior. We executed in all areas of the game against the A's, got timely hitting and great defense.

I was 13 at the time, and though I didn't have any money on that series it felt like I was losing a bet. You were going against all the odds it appeared. Though you started just 4 of the first 55 games, did you know you'd be starting every game? (He batted 2nd in the order in all 5 games of the '88 series)

Yes, just because of how the platoon worked. I pretty much knew.

I know that you were confident in yourself but HONESTLY, going up against that murderer's row with the Bash Brothers, how did you feel about your chances in that series? Did you feel like you were facing long odds?

Did you get a crack at Dennis Eckersley in that series? What did you think about his perceived dominance?

Over my career I did, but not in that series, they didn't have many opportunities to close games. When he became a closer, he became one of the best pitchers of our time. We were fortunate to get that homer off of him and never had to see him again.

So you know where I was headed with that, with Kirk Gibson and his moment. Where were you during the proceedings?

It was a special moment that was set up. I wasn't sure what he could do. I knew his legs were hurting so bad and he couldn't catch up with a fastball. But he was Kirk, and he fought and fought as he had all season and worked it to a 3-2 count, and went looking for that off-speed. Our scouting report said that Eck was prone to throwing the backdoor 3-2 slider to LH hitters. Got his slider and hit it well.

How was the parade in LA? Was it a big deal or was it routine because of all the Lakers parades in the '80s?

It was a big deal. And I had seen the Lakers parades also. It was surreal, and an experience I wish everyone else could feel. People were hanging off lamps, off rafters. You name it, they were hanging. Just unbelievable.They were enjoying the moment just as much as we were.

So there you were, a champion, about to enter your prime, and then the Dodgers had to go bring Eddie Murray (Hall of Famer, 500+ home runs, switch hitter) home to LA to take over the first base job, what were your feelings like at that point? That had to be deflating.

That's just baseball. You can't worry about that. Just play your game, play hard, stay ready and that's all you can do.

I had read that early arbitration entered into the proceedings, with the team and your representatives haggling over a mere $95,000 (imagine that in 2014). Coupling this with the Murray acquisition were you ready for a change of scenery? Ready to move on to Houston and the Astros?

No, no. They just made a trade. It was actually April Fool's Day. I thought it was a joke. Which was fine, I had won the World Series. But I was happy to go to a team  that was rumored to have had an interest in me for three years. And I got to hit in a lineup with Glenn Davis (former 1B slugger), play the OF. Basically got to become a regular there. It was tough to leave LA but I had a great experience in Houston.

How hard was it as a power hitter to hit at the Astrodome? How many balls died out there that you thought you GOT?

Not many. I drove the ball to all fields. I hit more homers in that ball park than any other LH hitter in a single-season. They tore down the Astrodome so nobody can break that record (Mr Stubbs and I laugh heartily at this). Unless you hit a lot of high fly balls you were usually OK.

We will break off the interview here, and resume with part three tomorrow, wherein we discuss Mr Stubbs cashing in on a nice Free Agent deal with Milwaukee, and some of the trials and tribulations that accompanied his move to the American League.

I hope you're enjoying the discussion so far. There are likely two more segments beyond this one. Stay cool Gobbler Country!