64 centers on one list, or 66 if you count the two additions to the Rimington Trophy watch-list since this past Spring. Why in the world?! With 125 Division One or FBS (FPS? Shouldn't it be Football Playoff System now?) member schools, this means that the watch-list for the nation's best center numbers better than half the starting center positions available at that level. Yet, the Hokies were left off the list completely, while some schools had two.

This isn't terribly important at this point, because the Hokies have been known to shift their line around a bit the past number of years. So it's not troubling that the list makers haven't identified Caleb Farris as the bonafide NFL caliber player that he will likely become. At 6'3, 303 lbs, the Rockbridge native has tremendous size for the position, and primarily played Left Guard last season, after playing some Center in 2012. His versatility and size make him NFL-ready, all he has to do is continue to improve and he should be a second day draft pick in April.

The line hasn't always played cohesively within the constraints of the Hokies schizophrenic play-calling. This year, with an experienced line, things should appear to be more settled. And in the end, I have a feeling Farris will make his case known, and those who omitted him will feel shame.

Jake Grove actually won this award in 2003 on his way to being drafted in the early 2nd round by the Oakland Raiders. And certainly Jim Pyne would have been considered in 1993, as he was a unanimous All-American, before embarking on a lengthy NFL career. 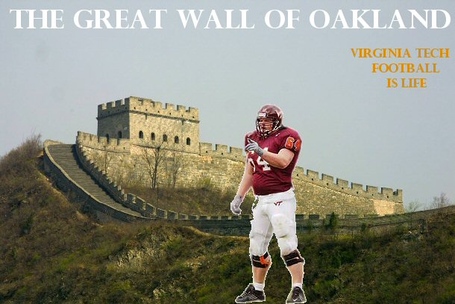 The award raises funding and awareness for Boomer Esiason's Cystic Fibrosis Foundation. Rimington was Esiason's long-time center on the mid-80s Cincinnati Bengals. Esiason's son Gunnar was born with Cystic Fibrosis, for those who were unaware.

Kalvin Cline did not make the John Mackey award watch-list. Ryan Malleck did not make it. Darius Redman did not make it. Bucky Hodges did not make it. This list was only 40 names long, and the Hokies best in memory has been Jeff King a few years back getting 26 balls and six TDs, and making two All-ACC 2nd teams. We just aren't a tight-end oriented team, and never have been.

That isn't to say we won't find 6-8 TDs amongst a few of those names up there this season, however. It's just difficult at this point for a team with equally matched talent at the position to ignore that and focus on just one (or even two) targets. With the emergence of Hodges, the position is now one of strength in my humble opinion, assuming Cline and Malleck are 100% for fall.

These are just fun topics to bandy about as the giant media machine revs up for the fall. And I think the Hokies are being undersold, which is nice. It'd be nice to go back to being underrated and over-performing, and this under-the-radar group just might be able to take advantage of a light schedule and do just that.

Of note: The Hokies will be facing off against Ohio State senior Jeff Heuerman (pronounced Higher-man) in week two, so whoever is WHIP better be ready, and the two veteran safeties need to be wary. That soft underbelly of the Tampa-2 defense between the LBs and the Safeties is where former Tech safety Eddie Whitley got Fleener'd so badly during the 2011 Orange Bowl against Andrew Luck and Stanford. Here's an early look at some of his highlights, including a smoking of Clemson at the 6:30 mark, he was also used as a ballcarrier on a fake punt...oh, Dabo:

Besides that, the campaign features only one other watch-lister: Braxton Deaver of Duke. My money would be on Nick O' Leary of Florida State, he is an absolute wrecking ball that gets to play one on one every down due to the Seminoles war-chest of talent. He's good for 10-12 scores this year easy.

Richmond QB Michael Strauss made the Walter Payton watch list for best FCS player. Just something to ponder over if none of our guys pans out. *Gulp* Guess we'll know soon enough. And that can't get here soon enough.

Back with more on the watch lists tomorrow as the kickers are featured tomorrow. Lou Groza and Ray Guy.