Is It Time To Shelve Enter Sandman?

We examine one of Hokie football's most popular traditions of the modern age.

Share All sharing options for: Is It Time To Shelve Enter Sandman?

Virginia Tech football has a number of well-known traditions.

The defense's lunch pail, touching the Hokie Stone before running on the field and the thundering boom of Tech's gameday cannon "Skipper" are all familiar sights and sounds to both Hokies and any college football fan that actually listens to the sideline reporter during a telecast.

However, there's no question that Virginia Tech football has become most known for its electric entrance into Lane Stadium coupled with Metallica's 1991 smash hit "Enter Sandman".

There are dozens upon dozens of videos on YouTube like the one above showing the entrance from every angle of the stadium. When the entrance is at its peak, the electricity is palpable. I've taken great pleasure in bringing non-Hokies to games and they've always become quick converts to the orange and maroon way of life once they feel the insanity firsthand.

Still, after more than a decade of these entrances there is a feeling that perhaps the whole affair has become a bit stale.

Sure for an important night game against the likes of Miami or Georgia Tech its the culmination of a full day of tailgating and building anticipation. But does it have the same effect for a 1:30 kickoff shown on ESPN3?

I submit that it does not.

That's not to say we need a new song. I absolutely love "Enter Sandman". Once in a while it will come on at a bar and the first few notes are all it takes to have a significant physiological impact. My pulse quickens, jaw clenches, and I'm told it's all accompanied by a menacing and unnerving glare.

But this isn't something to be abused. Playing the song too much takes away the impact it has. Soon it doesn't give you the same reaction you crave and you find yourself digging through Metallica's back catalog in desperation. Before you know it you're freebasing St. Anger just to get a fix and the results are entirely unsatisfying. 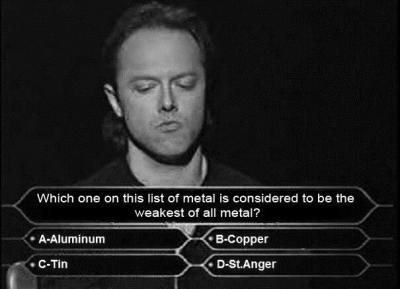 I'm sorry, that got dark in a hurry. Where was I? Right, the entrance.

I worry the whole Sandman affair has become something everyone takes for granted. It still has its moments of greatness, but everyone just kind of expects it now.

For many games there are large swaths of empty seats, particularly in the student section. Many fans would rather get in one last beverage at a tailgate than make the effort to arrive early.

I think it would be an interesting twist to limit the song's use only for big games. Thursday night contests, a big rival like Virginia or any ranked opponent would qualify. It would be Virginia Tech's spin on the Notre Dame tradition of only wearing green jersey's for special occasions.

Just think of the impact of not hearing the song all season until a crucial night game late in the year when the Hokies spill out onto Worsham Field clad in all maroon as fireworks explode overhead and 66,000 people go completely insane.

Or say you haven't heard it all day and suddenly during a TV timeout late in the game, Those notes come blaring out of the PA system and the place goes from a dull murmur to spontaneously nuts. That tactic has been used in recent years in addition to pregame with great success.

That's the kind of environment Tech is looking to get back to.

Of course winning will take care of most of the staleness, but I think it's worth looking at giving the pregame entrance a fresh coat of paint.

Until then, start jumping. It's game week.