A Hokie In King Saban's Court: The Final Seven...Make That Six Days

Another look into the professional world of SEC football Tailgate style. It's the best money can buy...kinda like our players down here!

Share All sharing options for: A Hokie In King Saban's Court: The Final Seven...Make That Six Days

The withdrawals are nearly over and the expectations heightened as the energy and excitement begins to swell as a wave building from the horizon racing to the coastline at 53rd St. in Va Beach. The highly anticipated season is upon us as our beloved Square Root of 1 prepares for the anti-climatic clash v. Bill and Mary (whatever editor, I've never been politically correct so why start now?).

In preparation for Saturday's initial kick to the inaugural playoff season for the Power 5 - oh, how original - the inebriated youth and I took on our "preseason camp" with the Tailgating Ritual here in Alabama. Every year since God was a boy, we pregame the pregame with tailgating festivities ‘uhh excuse me practice in the local Summit parking lot - a 10 acre upper crust nosebleed fed shopping center - with all proceeds going to some charity not named the ALS Ice Bucket Challenge. 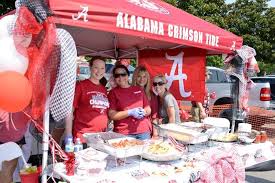 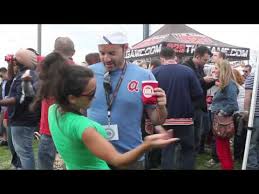 \\ On a humidity-filled, smog-induced Saturday with temps blasting past 102 "in the stands" and 124 degrees "on the field,"  OTA's begin with Alabama and Auburn tents featuring the best in tailgating fare this side of Atlanta as if we could compare this side of hell to anywhere else. WTF is a MGoBlue tent doing here? It was all I could do to not set that beast on fire! If he wasn't such a nice SOB giving away free ribs, then I probably would have. Now I see how and why Derrick Green ballooned up to 250 pounds. Besides, we have enough tailbacks to not need his bloated services.  For three hours, yeah that's it, because inebriated 20 to 50 something's don't do well in this heat, imbibed Good People and Avondale brews while sampling everyone's first pass at the 2014-15 tailgating menus.

Along with our accoutrements, the final seven days' conversations ranged from lil' Nicky's lawsuit, who's going to play QB for Alabama against the WestByGawds who can't have a real name for a state so attempt to take ours ya sorry-ass sofa burners to what's Constance Brooke Pellington's clothes schedule for all home games and what color bow tie Junior's  gonna' wear himself, lawd can we just get to the damn game...but that's not what this weekend's about.

Typical fare was southern fried chicken of various tastes with my favorite being the buttermilk and Siracha based batter a la Nawlins' is how we do chicken right. Drunken chilli (why? it's a bazillion degrees out here), Bubba burgers, from a honey-based or a spicy hickory infused burgers, ribs of every taste - tomato or vinegar based, highly massaged with "secret rubs" and my favorite this year, besides the cold beers, was PBJ's - no not peanut butter and jelly - pheasant and bacon-wrapped jalapenos. I was like that homeless crack addict losing his mind shoving'em in my pie hole nonstop for an hour. Not to mention the lemon icebox pies and such lite fare that didn't survive the heat, likely from some poor blonde cook who uses white out on her iPad screen...bless her heart!

And of course, we cannot escape talking about the orange and blue from down on the plains - WDE - that's War Damn Eagle for the uninitiated...whatever...are y'all tigers or damn flying chickens? The cough-cough elitists down there have been trying to determine how many National Championships they've won in the past century...as if. I don't think we would consider claiming playing for the NC v. Auburn in 2004 but what do I care. The preseason down at Auburn really focused on the untimely death of Phillip Lutzenkirchen which humbled all of us. I would caution our youth on a .377 BAC as a bit over the top and asking for trouble at 3am. In good humor however, Harvey Updyke was on tap to be the sacrificial lamb in a dunking contest to raise money for a local cancer-stricken boy in Mobile, but that idea was nixed at the last minute. Even in the attempts to do something good, the crazy bastards down here can't set aside their venom for a moment.

The countdown has begun, Finebaum's book is a modest success and the SEC network will rival all ESPN platforms down here creating even more buzz than 20,000 bees in that hive outside your patio. I'm not sure if I can wait the 96 hours until the gates open, but I'm headed to go OD on those PBJ's and cold mother's finest beers y'all. I'll be yelling GO HOKIES in this ditch over here...what step? what car?