What do Frank Beamer, Michael Brewer, Scott Loeffler, Isaiah Ford, and Bud Foster have to do with ... Heraclitus, the Pre-Socratic Greek Philosopher, the New River, and Metallica? What has Blacksburg to do with Athens?

Share All sharing options for: Virginia Tech Football: Michael Brewer, the New River, and the Flux 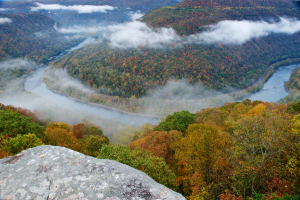 "You never step into the same river twice." Heraclitus

Not even Bud Foster can stop the passage of time or alter the reality of change.

It's a new season, and we have a new starting quarterback -- Michael Brewer, a transfer from Texas Tech, in case you've been in a coma like our offense.  If so, it's good to have you back.

When asked what his favorite thing about his new home was, Michael Brewer was succinct in answering. Simply put, "the New River." The quick study and avid outdoorsman not only appreciates nature, but also Occam's razor. Let's hope his passes are as crisp and precise.

That the New River is actually new to Brewer makes it new to me too, in a way, even though I grew up in Pulaski County. I've driven and hiked by it hundreds of times. Now I see it partly through the eyes of a Texas transplant who hasn't known it long enough to take it for granted.

Remember: all of this is new to Brewer. Have we paid enough attention to this fact? He hasn't even experienced a live game in Lane as a recruit, much less as a player. And it's not just Brewer.

Have you seen the Instagram video of our super talented freshman receiver, Isaiah Ford, hauling in a sideline pass in a scrimmage despite super glue coverage by Kendall Fuller?

Notice the excitement of Ford and the offense after the play. The first helmeted quarterback who darts into the picture? #12: that's Brewer. He dropped that beauty of a throw in there.

How much more excited must these new players be to run out of the tunnel onto Worsham Field for the first time in a live game? How motivated must our offensive players and staff be to show some improvement after the embarrassments of the recent past? I wager that our wide receivers will not be "garbage" in our next big game, at the Shoe. Hope you are watching when that time comes Reece Davis.

Some of us have been discussing here this week whether it would be best to limit or perhaps even eliminate the "Enter Sandman" tradition. I briefly entertained the latter thought. No tradition should be mindlessly adhered to just because "it's what we do." That's not in keeping with the spirit of Virginia Tech itself, an institution of innovation.

Then I saw this picture. 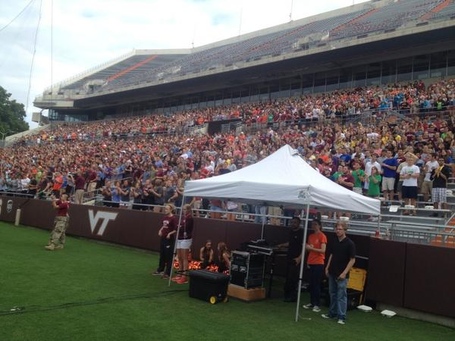 Yes, those are first year students, the class of 2018, practicing the Lane bounce to Enter Sandman.

When a football program puts its stamp indelibly on a university's identity in this way, it becomes a thing of great pride. However, it can still get rote. Sure, the Hokie acolytes have to be initiated into the game day rituals of the faithful, if they aspire to understand and embrace the passions of their forebears. But what if the faithful forget the point of their passion?

Rituals like "Enter Sandman" should not become dogmas to indoctrinate. We keep them fresh by keeping alive an ongoing discussion about why we do them, whether we ought to continue them, and how best to honor the enduring values they represent. So my preliminary conclusion is: like Pavlov's dogs, when "Enter Sandman" begins this Saturday (or any game day Saturday in Lane), get lathered and bounce, if you can. Bounce in irony, if you must. It's still fun.

Could any of this possibly be new and different for Frank Beamer, an elder statesman of NCAA Football? Of course. He's never led THIS team onto the field: with this exact group of players and coaches. For all he and we know, this could be Beamer's last first game of the season in Lane. Or the last first game for him as Head Coach of the Virginia Tech Football Team. Period.

It's enough to make one sniff and dart for the local Kroger in search of alcohol and kleenex.

If you were paying attention at the beginning, you might wonder what all this has to do with the famous quip of Heraclitus, the Pre-Socratic philosopher. (BTW, that's a good name for a liquor or a pet.) You might also have noted that, for Heraclitus, "New River" is always redundant. Like West Virginia redneck. Or University of Virginia snob.

(Oh, we kid the West Virginians and ... snobs. One word: scoreboard.)

Heraclitus captures in one memorable turn of phrase the paradox that the only thing that doesn't change, is that things change. Got that? Before you step into the river again, it has already changed, and so have you, whether you realize it or not. Same goes for stepping into Lane Stadium. (The ever fluctuating seating pecking order certainly "helps" with this insight.)

Change can happen so painstakingly, jurassically slow that we hardly notice it. Or it can seem to come far too late. Not a few of us have felt this way about the past decade of offensive incompetence or incompetent offense. Take your pick.

But let's move on. Sometimes we experience a game changing, season making, or program defining moment so suddenly and decisively that it lifts us into a (Lane) frenzy.

It's been a long time since we've had one of those. I mean: that is positive. Perhaps Logan Thomas's trucking Myles Jack of UCLA is something to salvage from an otherwise horrific Sun Bowl.

Of course, we all know what happened to Logan shortly after that play -- an apt metaphor for the past decade of Virginia Tech offense. Or what it has felt like, at times, to watch it as a rabid, passionate fan.

Apparently UCLA still employs the Godfather principle: You plow over one of our guys, we concuss one of yours.

Here Heraclitus helps. Change is inevitable, even if it's not always for the better. Leal wasn't ready then. Enter Michael Brewer now. We'll see if he is.

How could the offense, and special teams for that matter, get much worse? Odds are both are going to bounce back this year. How big will the bounce be, though?

I think Frank Beamer is tired of hearing about the demise of Beamerball. We have talented, albeit untested, kickers, and a proven punter -- always a must for Virginia Tech to have a chance. Our return game should be spiced up by rookies with breakaway game speed and instincts, who want to contribute in some way.

Bottom line: We might be better than average on special teams. That would be progress. Even Beamerball evolves! (Darwin wins. Kidding.) There is hardly any way to be worse on offense.

The New River, it turns out, is the oldest river system on the continent, and second in age only to the Nile, across the world. That is ancient. Older than Bobby Bowden and Beamerball. Yet it's new to Michael Brewer.

As a lifelong fan of the New River and the Virginia Tech Football Team, I'm floored by the irony. We always choose the uphill path as well, the tough way to go. We are, after all, the home of the Lunch Pail Defense.

Those of us who have passionately followed this team long enough know the creeping suspicion that we prefer to beat our opponent without having to score an offensive touchdown. It's just "what we do." This must change. It will change, beginning Saturday.

Bud Foster finally has a worthy counterpart in Scot Loeffler.

It could be that we will actually matriculate the ball down the field this year. (RIP, Hank Stram.) Perhaps we'll even miss Frank's "Who farted?" look on the sideline, after the usual special teams gaffes.

If the defense doesn't have to carry the entire team, imagine what Bud might do. There's a better chance our defense will return to its historically exceptionally opportunistic ways.

Bud's defensive units usually are tough as nails and steady as a rock. I expect this edition to be salty and aggressive to boot. Where our coaching has been most dynamic, our play has been most consistent. Somehow that jibes with Heraclitus.

If you aren't optimistic now about the season, you may never get the chance to be, this year. At least not in this crazy, irrational way.

Life is hard. By comparison, Virginia Tech Football in the Fall is akin to floating down a river on a gorgeous sunny day. Enjoy the journey. Embrace the flux. We are underdogs again.

Note to reader: if you made it this far, thanks. Stay tuned as I work to get better at this.

Note to self: I dedicate these ramblings to my dad, Rudell Frazier, class of 1965. This is our family's first season without him. We miss you, Dad.